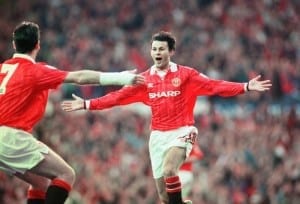 Ryan Giggs OBE is the one-club winger who became English football's most-decorated player, over the course of a 23 year career with Manchester United.

Making his first-team debut at 17, Giggs was a pacy, tricky left winger who drew almost immediate comparisons with United legend George Best, partly because his ability to dribble past opponents seemingly at will. A footballer in the same entertaining mould as Best, Giggs was the subject of similar media attention early in his career, as the advent of the Premier League raised the profile of English football worldwide.

But, despite huge interest in Giggs as a commercial selling point for the club and the league, Giggs was a level-headed character, protected from media interviews by his manager until the age of 20. A phenomenal natural talent was aided by hard work and an awareness of fitness that allowed him to continue playing at the very highest level, by adapting his training and his game, until he was 40. Giggs was the first and last of the much-hailed 'Class of 92' to play for United, having been handed a taste of first team football while still captaining the youth team (4 years before many of his team-mates), and continuing to play a season longer than his younger colleague Paul Scholes.

Giggs lit up the early years of the Premier League as United became the dominant force in English football. His electrifying pace and trickery scared defenders, and created space for others in a team growing in confidence and ability. He was also capable of scoring eye-catching goals that would leave opposition players on their backsides; in the early era of Sky TV, Giggs was a Box-Office footballer.

The League Cup title that he claimed in 1992 was to be the first of 34 club titles, a record for any player. In fact, the list of records set and broken by Giggs is almost as long as the list of titles won. Making appearances in 22 consecutive Premier League seasons (and scoring in 21), he holds the record for the most appearances (632) and assists in the competition, has made the most Champions' League appearances of any British player (145) and is his club's all time record appearance holder (963).

"I remember the first time I saw him. He was 13 and just floated over the ground like a cocker spaniel chasing a piece of silver paper in the wind." Sir Alex Ferguson

While still in his early 20s, Giggs was able to adapt his game to play in more central areas, creating goals from midfield or behind the striker. Deep into his thirties, he was often introduced in even deeper midfield roles, where his experience and technique could help a team full of young talents to retain possession and see out games. Despite his advancing years, Giggs' athleticism and acceleration could still take opponents often a decade or more his junior by surprise.

In a career littered with iconic moments, probably the most famous came in an FA Cup semi final replay against Arsenal. With United chasing an historic treble of Premier League, FA Cup and Champions' League titles, Giggs was one of 5 first team players rested by Sir Alex Ferguson for the game. He was introduced after an hour and, in the 2nd half of Extra Time, with United down to 10 men, and having seen Peter Schmeichel save a penalty minutes earlier, he won the game for United. Picking up the ball from a loose Patrick Vieira pass in his own half, Giggs accelerated over 50 yards, leaving the Arsenal midfield behind and beating 3 international defenders without breaking stride, before rifling a shot over England goalkeeper David Seaman.

Giggs' intervention was symbolic of the confidence and never-say-die attitude of the United team which now featured a number of his youth team colleagues. It deflated an Arsenal side who had won the double the previous year, and arguably spurred on United to complete that historic treble. Nine years later he was to score the winning penalty for United in another Champions' League final, lifting the trophy alongside Rio Ferdinand. The veteran winger was to go on to lift three further Premier League trophies, bringing his total to 13, in a career which is unlikely to be matched by any player in the future.

Appointed Interim Manager of Manchester United at the end of the 2013/14 season, Giggs gave debuts to a number of young players during 4 games in charge, before becoming Assistant Manager of the club alongside Louis Van Gaal at the start of the 2014/15 season.

Ryan Giggs was inducted to the National Football Museum Hall Of Fame in 2005, but collected his trophy at the 2015 ceremony, before presenting former team-mate Gary Neville with his award.