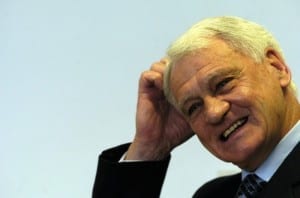 Highly regarded as one of the game’s great gentlemen, Sir Bobby Robson collected trophies and earned the respect of players and supporters alike, both at home and on the continent.

Although Bobby – the son of a County Durham coal miner - was an avid Newcastle fan, he opted to head south to sign his first professional contract at newly-promoted Fulham, turning out at wing-half and, later, inside forward. In the early days of his career, Bobby continued to work part-time as an electrician at the behest of his father, but soon gave up the trade in favour of full-time football at Craven Cottage.

After suffering relegation with Fulham in 1952, Robson became a first-team regular in Division Two. His form caught the eye of First Division mainstays West Bromwich Albion, who broke their club record fee to sign Robson for £25,000 in 1956. Robson spent six and a half seasons at the Hawthorns before heading back to Fulham, spending his final playing days at his first club.

A fractious spell as player-manager of Vancouver Royals did not discourage Robson from moving into management, and he soon returned across the Atlantic to take charge at Fulham in 1968. He struggled with the Thameside club, unable to stave off relegation to Division Two before his departure, but a chance encounter with Ipswich Town director Murray Sangster would precede one of the greatest eras in the Tractor Boys’ history.

"JUST THINK OF THE NICEST WORDS AND YOU CAN THINK OF BOBBY ROBSON. HE WAS SUCH A NICE, KIND MAN WHO HELPED SO MANY PEOPLE."  CLIVE WOODS

Success was not delivered overnight. Robson spent four years building his Ipswich team, largely developing players through the club’s youth programme and forging a special bond with his squad. The hard work and camaraderie would ultimately pay off, starting in 1973 with victory in the Texaco Cup. Town were frequent fixtures in the top six from then on and added further silverware to the cabinet in the late seventies and early eighties, lifting the FA Cup for the only time to date in 1978, before tasting UEFA Cup glory in 1981. 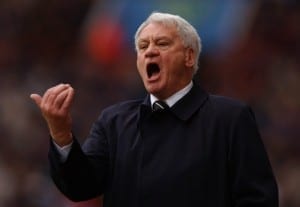 Robson’s impressive CV and renowned man management skills convinced the FA that he was the right man to succeed Ron Greenwood at the helm of the England team. Although a tough taskmaster, Robson was fiercely loyal to those who gave their all, and never failed to get the very best out of his players. The approach worked at Portman Road, and would prove similarly effective with the national side.

After failing to qualify for 1984's European Championship, Robson and his players responded well with a strong performance at the following World Cup, bowing out in controversial fashion at the hands of Argentina. Though England departed Euro 1988 without a win to their name, Robson's men bounced back once more on the world’s biggest stage. England stormed through to the World Cup semi-finals in Italy, defeated on penalties by World Cup nemesis West Germany, but Robson had become only the second coach in history to guide England to the final four. The first was Sir Alf Ramsey.

"TO PLAY FOR A MANAGER LIKE THAT - WHO WAS SO LOYAL, AND GAVE YOU SO MANY OPPORTUNITIES - MAKES YOU FEEL HUGELY GRATEFUL AND LUCKY."  GARY LINEKER

With his England contract expiring, Robson sought a new challenge on the continent. He collected back-to-back Eredivisie with PSV Eindhoven and achieved the same feat at Porto, before guiding Catalan giants Barcelona to an impressive cup treble in 1996.

After a brief return to PSV, Robson enjoyed a belated homecoming at boyhood club Newcastle United prior to the turn of the millennium. His close relationship with the players and astute reading of situations inspired loyalty and commitment within the dressing room, and his crop of players restored the Magpies' reputation as one of the country's leading clubs. Under Robson, the Magpies qualified for the Champions’ League, reached a UEFA Cup semi-final and finished fifth or higher in three of his five seasons on Tyneside.

Sir Bobby Robson was knighted in 2002, and the veteran manager was handed the freedom of his beloved city in 2005. Having been diagnosed with cancer multiple times throughout his managerial career, he established the Sir Bobby Robson Foundation, a charity dedicated to cancer detection and treatment, in 2008.

Remembered as much for his devotion to the game and his warm nature as much as his personal achievements, Sir Bobby remains one of football's highly esteemed figures.