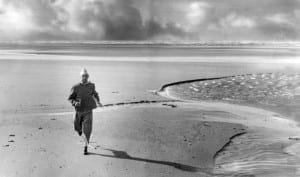 Stanley Matthews was born in Hanley in Stoke on Trent in 1915. His father, a professional boxer known as ‘The Fighting Barber’, instilled a lifelong dedication to training in the young Stan. From the age of six onwards Stanley did deep breathing exercises, chest expanding and skipping, and walked everywhere. He even led on dietary developments including fasting and detoxing. On Thursdays he would only drink carrot juice all day.

In 1929, at the age of 14, he signed for Stoke at £1 per week on the office staff. As an amateur he played 22 games for the reserves aged just 16, with other players giving him two shillings from their bonus when they won. He finally signed professionally for Stoke at 17, being paid the top available wage of £5 per week.

A year later he won a Division 2 medal as Stoke were promoted to Division 1. In 1934 he won his first cap for England, scoring in a 4- 0 win against Wales. Matthews was 19 at the time, and his international career would continue for another 23 years.

Stanley’s first overseas international in 1938 took him to Nazi Germany where the England team were ordered to give Hitler the infamous Nazi salute. Matthews scored in a 6-3 victory. 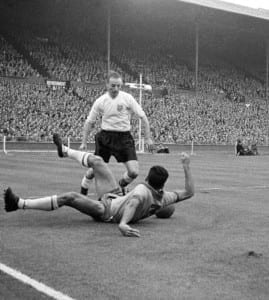 When war broke out Stan was transferred to the RAF and was posted to Blackpool as a PE instructor. He also played 30 representative games for the Blackpool club and other teams to entertain the troops along with other great players such as Tommy Lawton, Wilf Mannion and Raich Carter. The war meant Matthews’ career was on hold between the ages of 24 – 30, but he went on to play in another 19 seasons after the end of the conflict.

In 1946 he played in the tragic FA Cup tie against Bolton at Burnden Park when 33 spectators were killed and 500 injured- though incredibly the match was completed after the interruption. Stan donated two weeks' wages to the disaster fund.

At the age of 32 Stan left the Potteries, signing for Blackpool for £11,500 and a bottle of whisky, but not before he helped Great Britain beat a Rest of Europe side 6-1 before a crowd of 134,000 in Glasgow. A Belgian defender in one game said marking him was like ‘trying to mark a ghost’

In 1948, even though Manchester United beat Blackpool in the FA Cup Final, Stan was voted Player of the Year. In 1951 Blackpool lost again in the final to Newcastle United. 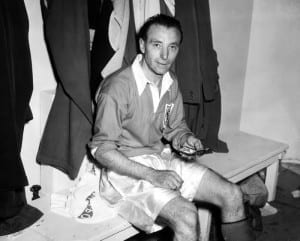 1953 FA Cup Final
Stanley Matthews of Blackpool with his winners medal, after victory over Bolton in the FA Cup Final.
May 1953. Pic courtesy of Mirrorpix.

In the 1953 final his Blackpool side were losing 1-3 in the second half, only for Matthews to pull out a vintage 30 minutes in which he created 3 goals for his teammates. Stan finally got his FA Cup Winner’s medal at the age of 38 - presented to him by the new Queen Elizabeth II. The game went down in history as ‘The Matthews Final’. It is said that the only time he ever drank alcohol was champagne, directly from the FA Cup.

His standard of performance remained remarkably high, and Matthews was the recipient of the first European Footballer of The Year award in 1956. The following year he was made a CBE. 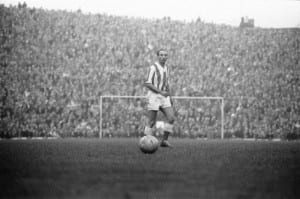 Blackpool enjoyed some competitive seasons but, as Matthews found himself out of favour following a change of manager, he was lured back to Stoke City, aged 46, for a fee of £3,500. In his first game back with the club he added 20,000 spectators to the crowd. An inspired Stoke won promotion back to the top flight of English football. Matthews became the oldest player ever at this level in 1965, aged 50, becoming the first active player to receive a knighthood at Buckingham Palace in the same year.

Matthews’ remarkable era-straddling career can perhaps be summed up by the list of players eager to take part in his testimonial game, on April 28 1965: Yashin, Puskas, Eusebio and di Stefano were amongst those eager to face him for the final time. Moore, Charlton, Armfield, Haynes and Greaves were a handful of the England stars who wanted to line up alongside one of the true all-time greats.