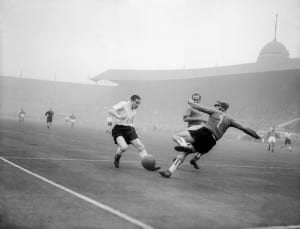 Stan Mortensen scoring a goal for England in the first ever match against a Rest of the World team
October 1953. Pic via Mirrorpix.

Stanley Harding Mortensen is one of England's all-time great centre forwards; an inspiration for a generation of strikers who followed and anyone who saw him play for Blackpool or England. Yet it could be argued that Mortensen's achievements deserve even wider recognition than that afforded him by fans of the Tangerines.

The South Shields-born striker won his only silverware when he became the first man to score an FA Cup Final hat-trick in 1953, as Blackpool came back from 1-3 down against Bolton Wanderers to win 4-3. However the nation's press and many football fans were so interested in Mortensen's 38 year-old team-mate Stanley Matthews' quest for the only silverware of his career that Matthews' hat-trick of assists stole the headlines. It's said that Sir Stanley was embarrassed by the phrase 'The Matthews Final', but Mortensen's record is not the only part of his career often overlooked. Both men had previously lost two FA Cup finals with Blackpool. The two certainly had an on-pitch understanding. Mortensen allegedly even mildly scolded England team-mate Tom Finney after heading in Finney's cross, because "Matthews crosses them so the laces (on the football) face away from you...".

Like Matthews, Mortensen had seen much of his early career wiped out by World War Two. He was the only survivor of his RAF bomber crew after a crash in 1939, aged 18. Having been scouted by Blackpool as a schoolboy he had to wait until 1946 to make his league debut, having played for England during wartime internationals. 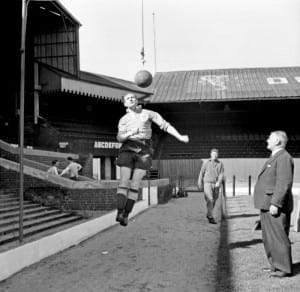 In 1947, Mortensen set another still-unbeaten record by notching four goals on his full England debut, a 10-0 thrashing of Portugal. His record of scoring in 12 consecutive FA Cup rounds (including the final of 1948) remains unmatched. His feat of scoring in 15 consecutive First Division games in 1950-51 is often overlooked in the record books for two games missed due to injury in the middle of such an impressive run. His 197 league goals in nine-and-a-half seasons put him second in the club's all-time scorer list.

In total, Mortensen scored 23 goals for England in 25 appearances, including England's first ever World Cup goal , in a 2-0 victory against Chile played in Rio. He was unlucky again that the tournament is more commonly remembered for England's shock defeat to the USA. Aged 32 by the time the 'Magical Magyars' came to Wembley in 1953, the 6-3 defeat to Hungary was to be Mortensen's final game for England.

Stan Mortensen played his way into the history books everywhere from Wembley to the Maracana, but it's the slightly less exotic shores of Blackpool where 'Morty' is rightfully revered; fans helped to raise funds for a statue of their hero in 2005. He was a player who gave everything for club and country. He passed away in 1991, aged 69.