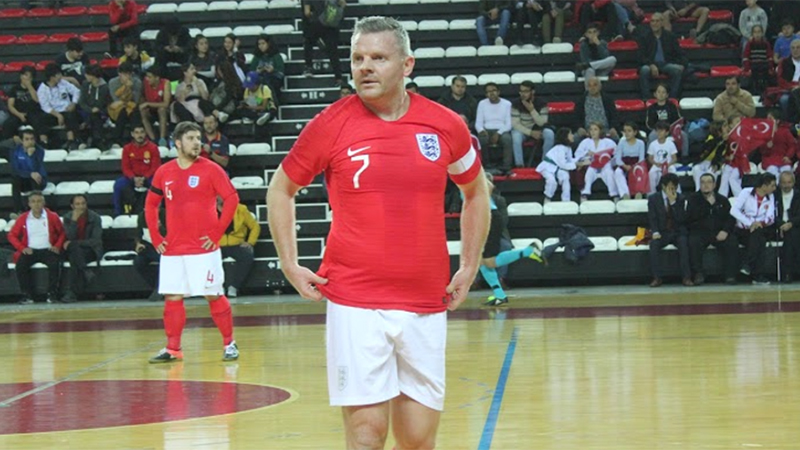 A mainstay in the England partially-sighted futsal team, Stephen Daley remains the Para Lions’ record cap holder, having played for the national side 143 times during a remarkable 25-year career.

Born in Belfast, Stephen started out with lofty footballing aspirations, living and breathing the beautiful game. He was part of Glentoran’s youth setup in his teenage years, even earning international recognition with Northern Ireland schoolboys, but his failing eyesight put paid to any hopes of a professional career. Stephen was diagnosed with cone dystrophy, a condition that affects a person’s ability to pick out colour and detail.

Daley began playing futsal while studying at Loughborough University, where his talent was spotted by national selectors. At the age of just 19, he featured for England at the 1995 European Championships, though success was far from immediate: the Para Lions lost 8-0 to Spain in what Daley described as a “spanking…it could have been a lot more”.

Over the years, the English approach to futsal developed to become more professional, in line with their European counterparts, and Daley was central to that progression. Made captain at the age of 21, he went on to feature at no fewer than nine World Championships and the same number of European Championships.

Daley won seven international medals during his time within the England setup, including a bronze at the 2017 European Championships. In that tournament, he equalled then surpassed Peter Shilton’s record of 125 caps. Within a matter of months, the skipper was leading the Para Lions out at a World Cup final, losing 3-0 to Ukraine.

Two years later, a 43-year-old Daley led the Para Lions to their second successive final in Turkey, where England were once again defeated by the dominant Ukrainian side. The long-serving captain retired thereafter, having racked up 143 caps for the national side.

After hanging up his boots, Daley – who worked as deputy head of Preston City Council’s parks, streets and leisure – has put his coaching badges to good use, delivering a futsal programme with Burnley’s academy. In 2020, he was recognised in the Queen’s honours list, receiving an MBE for services to para football and futsal. He was also appointed as head coach of the England side, helping to bring on the next generation of players following in his footsteps.