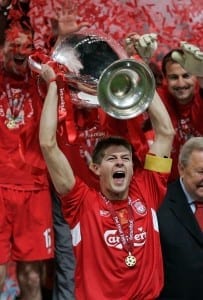 Steven Gerrard is regarded as one of English football’s most influential midfielders of the modern era.  A one club man in England, Gerrard made 504 Premier League appearances for Liverpool, scoring 120 top-flight goals.  He also played for England more than 100 times.

In 17 seasons at Anfield, Gerrard won numerous domestic and European trophies including, most famously, the Champions League in 2005.

A regret was that Gerrard was not able to win the Premier League during his career, finishing as runner up with Liverpool on three occasions.

Gerrard made his Liverpool debut on 29 November 1998 though it wasn’t until the following season when he began to play regularly in midfield.  In the 2000-01 season, he made 50 starts in all competitions as Liverpool won the treble of League Cup, FA Cup and UEFA Cup.

He became Liverpool captain in October 2003 and in 2005 was involved in one of the greatest nights in the club’s history.  Trailing Milan by three goals at half time in the Champions League final, a Gerrard inspired Liverpool fought back with three goals in six minutes, before winning the match in a penalty shoot-out.

In the summer following that win Gerrard came close to leaving for Chelsea but eventually decided that he could not depart his home town club, signing a new four-year deal.  The following season Gerrard scored a spectacular 35 yard equaliser in the closing stages of the FA Cup final against West Ham to take the match to extra time and eventually, another win for Liverpool on penalties.

In August 2012, Gerrard captained Liverpool for the 250th time, ending the season with a third League Cup, his final trophy with the club.

Gerrard’s final appearance for Liverpool came on 16 May 2015 before an 18 month stint at LA Galaxy in the United States brought his playing career to an end.

In 114 England appearances, Gerrard scored 21 goals for his country appearing at both the European Championships and World Cup.  He made his debut in May 2000 and retired after the 2014 World Cup in Brazil.

Gerrard returned to Liverpool in January 2017 and was appointed Under 18 coach for the 2017-18 season, combining this role with media commitments.