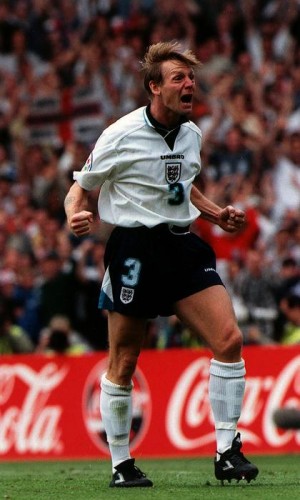 Stuart Pearce is one of England’s greatest defenders; a tough-tackling, no-nonsense full-back with a terrific left foot which helped him register 87 career goals.  A Nottingham Forest legend, Pearce will always be remembered for two penalties; his saved effort at Italia ’90 and subsequent redemption during Euro ’96.

Working as an electrician, Pearce spent five years in non-league with Wealdstone, before signing a first professional contract with Coventry City in 1983.

After more than 50 games for the Sky Blues, Pearce made the move to Nottingham Forest, joining Brian Clough for what proved to be one of the most successful periods in the club’s history.

During 12 years at Forest, Pearce amassed 401 appearances, many of them as captain, scoring 63 goals. Pearce won two League Cups with Forest and was an FA Cup runner up, scoring the first goal in the 1991 final (though the match was eventually lost 2-1 to Tottenham).

After a short spell as caretaker player-manager, Pearce left the City Ground in 1997, where he will always be regarded as one of the club’s greatest ever.

In his later playing career, Pearce made over 35 appearances for three clubs; Newcastle United, West Ham United and finally Manchester City, where he retired from the pitch in 2002.

Pearce also spent 12 years as an England international, making 78 appearances.  Reaching the semi-finals of the World Cup in 1990 and European Championships in 1996, Pearce suffered double disappointment as England lost both matches to the Germans on penalties.  Pearce was the third oldest outfield player to appear for England; a testament to his career longevity.

During a high profile coaching career, Pearce has had club spells in charge of Manchester City and Nottingham Forest.  Pearce has held his longest job to date in international football, six years in charge of England U21s.  He has also manged the senior side on a caretaker basis and was in charge of the Great Britain Olympic team at London 2012.