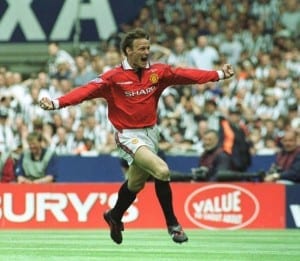 Edward (Teddy) Sheringham is renowned as one of the finest English deep-lying centre forwards of modern times.  In a professional career spanning almost 25 years, Sheringham played top-flight football for six different clubs, with a trophy-laden period at Manchester United sandwiched between two spells at Tottenham.  Whilst at Old Trafford, he was part of the treble-winning side of 1998-1999.  As an England international, Sheringham scored 11 times in 51 appearances for his country.

Sheringham began his professional career at Millwall and was part of the side that gained promotion to the First Division in 1988, for the first time in the club’s history.  Millwall stayed in the top four for much of that 1988-89 season, eventually finishing 10th.  When he left after 8 years, Sheringham had scored 111 goals for the Lions in all competitions.

Moving to Nottingham Forest in July 1991, Sheringham was responsible for a little piece of sport broadcast history, having scored the first ever Premier League goal on Sky Sports in a 1-0 win over Liverpool. 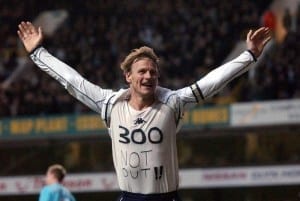 It was not until he moved to Tottenham a year later that Sheringham achieved international honours, making his England debut at the relatively late age of 27.  It was under Terry Venables that Sheringham had his most productive time as an England player, forming one half of the SAS strike partnership with Alan Shearer that proved so successful during Euro ’96.  In a group game against the Netherlands, both forwards scored twice as the Dutch were taken apart 4-1.

Sheringham also appeared at World Cups for England in 1998 and 2002.

In two separate spells with Tottenham, Sheringham amassed 166 appearances, scoring 76 goals.  Hugely popular with Spurs fans, Sheringham established himself as one of the Premier League’s finest forwards, though success eluded him - a League Cup runner’s up medal in 2002 apart.

Highly respected by his team mates, Jurgen Klinnsman, who Sheringham played with in the 1994-95 season, claimed that he was the most intelligent strike partner he ever had.

It was not until Sheringham agreed to join Manchester United in 1997 that he achieved the honours to match his obvious talent. 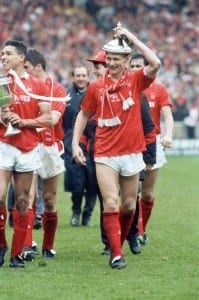 The 1998-99 season saw Sheringham win his first Premier League title at the age of 33.  A week later he came off the substitute’s bench to score United’s opening goal in a 2-0 win over Newcastle United in the FA Cup Final.  The crowning glory came on 26 May 1999 in Barcelona’s Camp Nou.  Trailing 1-0 to Bayern Munich in the Champions League Final, Sheringham scored a stoppage time equaliser before setting up Solskjaer for an even later winner.  Sheringham and United had won the treble.

Sheringham later moved on to Portsmouth, where he played one season; 2002-03, their first in the Premier League.

He went on to West Ham United, where he made 76 appearances and played in the 2006 FA Cup Final. Aged 40, Sheringham became the Premier League’s oldest goalscorer, notching against his former club Portsmouth in December 2006.

Sheringham finished his career at Colchester United, making his final professional appearance on 26 April 2008, aged 42. He had made over 700 career league appearances. Teddy was inducted to the National Football Museum Hall Of Fame at a ceremony in London in 2009.