“Thierry Henry could take ball in the middle of park and score a goal that no one else in the world could score." - Arsene Wenger

Located in the south-east corner of the Emirates, by the Spirit of Highbury mural, is a bronze statue of Thierry Henry. The Frenchman's pose is that of his famous celebration after scoring against North London rivals Tottenham Hotspur at Highbury in 2002. In a sweeping counter-attack, he sprinted away from the chasing Spurs midfield and, with the defenders quickly back-pedalling, placed the ball past goalkeeper Kasey Keller from the edge of the area.

The goal epitomised Arsenal at the time. Calm, cool and collected Henry was the centre-piece of a masterclass in counter-attacking football. For the Red half of North London, the Frenchman had become a legend. 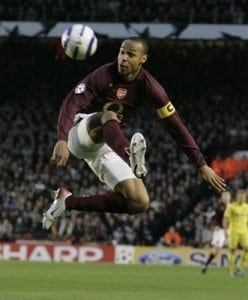 Having come to prominence with Monaco, Henry arrived at Arsenal in 1999 following a difficult season in Italy with Juventus, where he had mostly been played as a winger. The fee of around £11 million was to be a bargain for a man who had been his country's top scorer in their victorious 1998 World Cup.

Under his long-term mentor Arsene Wenger, Henry became Arsenal’s all-time leading goal scorer with 226 goals. He won two league titles and three FA Cups with the Gunners. In the 'Invincibles' season of 2003-04 Henry missed only one league game, scoring 30 goals to finish as the league's top scorer; an accolade he took in 4 of his 8 seasons at Highbury. Fittingly, he was captain of Arsenal for his last two seasons and led the team to the 2006 Champions League Final.

An Arsenal legend before the age of 30, Henry made a surprise switch to Spanish giants Barcelona in 2007. He later said he had become too influential on the pitch and Arsenal's young players were prioritising giving him the ball, to the detriment of the team. 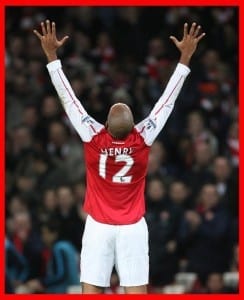 Arsenal's former player and new loan signing Thierry Henry scores on his first game back during the English FA Cup 3rd round between Arsenal and Leeds United at the Emirates Stadium in London, 09 January 2012. Pic via Mirrorpix.

With Barca he was part of the side that won 6 trophies in one season in 2009, before moving to the MLS with New York Red Bulls. He was part of the 'All-Star' team for 4 consecutive seasons, even finding time to return to Arsenal on loan in 2012 for an emotional cameo appearance mid-season. Typically, he scored winning goals in league and cup appearances.

His International career has further built on his already bursting trophy cabinet: winning a World Cup, European Cup and Confederations Cup. He surpassed Michel Platini’s France goal-scoring record in 2007, as he headed to a total 51 international goals.

In an era of football superstars Henry's playing prowess and international reputation have resulted in his being one of the most commercially successful footballers; synonymous with goals but also with a certain ‘Va Va Voom’.

Initially inducted to the Hall Of Fame in 2008, Henry collected his award at a special celebration event organised by the National Football Museum in London in January 2011, attended by a selection of former team-mates, all keen to hail one of the all-time greats.

Since his retirement Henry has earned plaudits as a TV pundit, and done notable charity work for causes including Unicef.