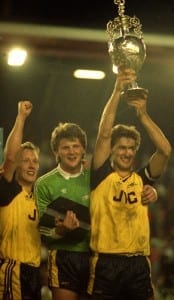 Tony Adams is the exceptional Arsenal centre-half who spent his whole playing career with the North London club.

He remains the only player to captain his side to top-flight championship wins in three different decades, having lifted the First Division trophy in 1989 and 1991, and the Premier League trophy in 1998 and 2002.

He was made captain by manager George Graham at the age of just 21, who described him as "my sergeant-major on the pitch. A colossus."

"I COULDN'T WAIT FOR HIM TO RETIRE" SIR ALEX FERGUSON

The cornerstone of Graham's title-winners was the legendary, high-pressing defence organised chiefly by Adams. His determination was best exemplified in one of the most famous games in the club's history when, needing a two-goal victory at Anfield to clinch the title on the final day of the 1988-89 season, Adams' defence kept a clean sheet and Michael Thomas scored The Gunners' 2nd in added-time.

Adams scored for England at Euro 1988, but missed out on playing at the 1990 World Cup, despite manager Bobby Robson describing him as a "future England captain", and his well-documented battle with alcoholism became increasingly public knowledge in 1991. Adams even spent 2 months in prison yet still played 38 games as Arsenal once lifted the Division One trophy at the end of the season, losing only one game and conceding just 18 league goals. 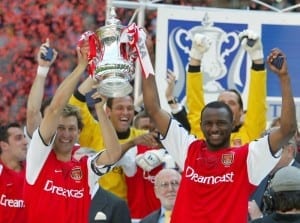 Adams' struggles were to be highlighted as he found himself playing in a new era. Division One gave way to the Premier League in 1992, and Arsenal gave way as champions to first Leeds United and then the early dominance of Manchester United. George Graham was sacked in 1995. When Arsene Wenger was appointed in 1996 the Arsenal drinking culture was wiped out and, with Adams very publicly seeking treatment, he found his leadership skills put to good use in Wenger's new-look side.

Welcomed back into the England fold by 1996, Adams captained the Three Lions on 15 occassions, making 66 appearances in total. 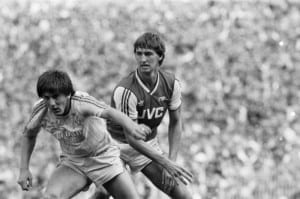 With Wenger's Arsenal, Adams was part of a formidable 'spine', with goalkeeper David Seaman, midfield lynchpin Patrick Vieira and the sublime Dennis Bergkamp. The captain was restricted by injury during Arsenal's double-winning 1997-98 season, but summed up the transformation he and his manager had seen the club through on the final day of the season. Already 3-0 up at home to Everton, late in the game the centre-half with a reputation for playing others offside spotted an opportunity. Adams sprinted forward as the ball was was won in midfield: running on to a delightful chipped pass the number 6 beat the offside trap, took a touch, and rifled in a left-footed finish from the edge of the area. An iconic Highbury moment, the arms-aloft celebration is captured in a statue outside Arsenal's new stadium.

A career spent putting his body on the line caught up with Adams over time, and he made only 10 league appearances when Arsenal repeated the double-winning feat in 2001-02. Still, 19 years and 669 games after his first appearance, Adams' leadership and determination meant he had well earned the nickname, 'Mr Arsenal'.