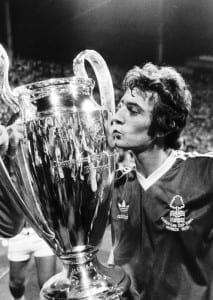 Nottingham Forest striker Trevor Francis kissing the European cup after his winning goal against the Swedish club Malmo won the trophy for Forest for the first time
June 1979. Pic by Mirrorpix

In 1979 Trevor Francis became the first British footballer to command a £1 million transfer fee when he moved from Birmingham City to Nottingham Forest.  The manager Brian Clough may have claimed publicly that the actual price tag was £999,999 to reduce pressure on the young forward, but Francis repaid the faith, and the fee, with a vital goal just a few months later.

On 30 May 1979 Francis scored the winner in the European Cup final as Nottingham Forest beat Malmo 1-0 in Munich, diving low to send a header high into the net. Francis' career with Forest was to be interrupted by injury, but his place in their folklore was assured.

Francis had started off playing schoolboy football in Plymouth but joined Birmingham City, making his debut in 1970, at the age of only 16. He scored 119 goals in 280 eye-catching appearances, before joining Forest in 1979. During the summer either side of that European Cup he even went on loan to NASL side Detroit Express, scoring prolifically in a league filled with world stars. However, injury was to cause him to miss the 1980 European Cup final, as Forest remarkably retained their title. 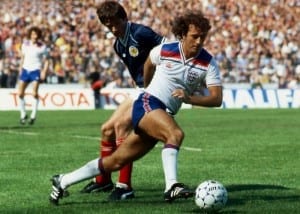 Trevor Francis goes past Alan Hansen May 1982. Pic by Mirrorpix.

Despite struggles with injury, a £1.2 million fee saw Francis move from Forest to Manchester City in 1981, and the player's undoubted talent saw him make the World Cup squad in 1982, where he scored twice in the first group stage. A player of mercurial talents, he was tempted to Italian giants Sampdoria shortly after the World Cup, spending 4 seasons in Genoa and another with Atalanta. Having played alongside fellow Hall Of Fame member Graeme Souness in Italy, Souness then brought Francis back to Britain to play for his Glasgow Rangers side, before Trevor took his own step into the player-manager role, with Queens Park Rangers and then Sheffield Wednesday. 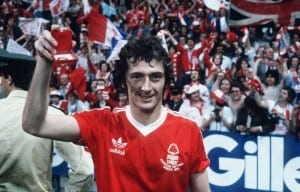 Francis' Wednesday won The League Cup and promotion to the top flight in 1991, and the manager continued to play Premier League football until finally hanging up his boots aged 39 in 1994.

In a 23 year career, Francis had gone from the Second Division of the early 70s to the Premier League of the 90s, rubbed shoulders with Cruyff and Beckenbauer in the USA, experienced the hotbed of Italian football in the 80s, and, in one iconic moment, had stooped low to conquer European football. Clough needn't have worried about the pressure of the price tag.