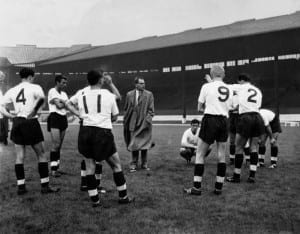 England Under 23 team trial game against an England eleven at Old Trafford, Manchester, prior to Under 23's match against a Danish eleven. England team manager Walter Winterbottom chats over positional moves with the England team players during the game's interval. The game provided good practice for the England team, too, - they play against Ireland in October. September 1960 P008137. Picture courtesy of Mirrorpix.

In 1946 Walter Winterbottom was appointed as the FA’s first Director of Coaching. As he recalled, ‘it also had a sideline to it – manager of the England teams’ (amateur and professional.) For 16 years Winterbottom held these two posts, making him a hugely significant figure in the development of football coaching and the history of the England international team.

Born in Lancashire and educated at Oldham Grammar School, Winterbottom was a talented amateur player before turning professional with Manchester United, the money helping him study as a teacher at Leeds Carnegie Physical training college. Injury cut short his playing career but his work as head of physical training in the Royal Air Force impressed Stanley Rous, the head of the Football Association. Rous appointed him as Director of Coaching and for 16 years they worked tirelessly to modernise English football.

It was his role as England manager that attracted most attention. Winterbottom never had sole control of selection, having to share it with an eight man committee. He took England to four World Cup tournaments but his teams tended to peak beforehand. In 1948 England beat Portugal 10-0 and Italy 4-0, both away from home. In 1950 though, they lost 1-0 to the USA and went out at the Group stage. In 1961 England beat Mexico 8-0 and Scotland 9-3 before losing to Brazil in the quarter-finals of the 1962 World Cup. In total he oversaw 139 games, winning 68% of them.

It was as a pioneering coach though that Winterbottom experienced true success. He founded the National Coaching Centre at Lilleshall and inspired a generation of players to take up coaching. Future West Ham and England manager Ron Greenwood recalled that ‘if you went on a course with Walter you came away thinking that he was a Messiah because he’d open your eyes.’ For future England manager Bobby Robson, ‘he was a prophet.’

In 1962 Winterbottom moved to become secretary of the Central Council for Physical Recreation and in 1978 he was knighted for Services to Sport. Appropriately, the FA unveiled a statue of him in 2013 at the new St. George’s Park coaching centre.