How To Get Here

The National Football Museum is right at the heart of the action!

We are located in Manchester city centre in the iconic Urbis Building in the Medieval Quarter, a two-minute walk from Manchester Victoria Station and five minutes from Shudehill Bus Station.

As a low carbon venue, we encourage our visitors to use the greenest transport option possible when travelling to the museum, and to reduce congestion and air pollution in the city centre.

Manchester City Centre is very well connected by train, tram and bus and also has cycle and walking routes. The Transport for Greater Manchester website has detailed information on the best way to get around the city: https://tfgm.com/

Travelling under your own power, whether walking or cycling, is the easiest and greenest way to get around the city centre. Transport for Greater Manchester’s Bee Network provide tips for active travel: https://beeactive.tfgm.com/bee-network-vision/

There are five bike racks located on Corporations Street next to the museum. The nearest cycle parking facility can be found at the City Tower Cycle Hub next to Piccadilly Gardens, a 10-minute walk from the museum.

Victoria Station is a 2-minute walk from the museum and operates regional services to and from Bolton, Southport, Wigan, Preston, Blackburn, Liverpool, Manchester Airport, Edinburgh, Rochdale and Leeds.

Piccadilly Station is the city’s principal station and connects to locations across the country, including the east coast main line to London Euston and Manchester Airport.

Manchester has an extensive bus network including a fleet of fully electric vehicles on certain routes. There is a bus stop (code NP) right outside the museum on Corporation Street served by many different routes.

Going to the match?

There is a signposted walking route to the stadium from Manchester Piccadilly Station, which takes around 20 minutes.

Old Trafford is a three-mile walk from the museum. The most popular mode of transport, however, is the Metrolink tram system. MUFC and Victoria Station are linked by the Bury – Altrincham (green) line or the Altrincham – Piccadilly (purple) line (changing at Piccadilly Gardens to the Bury service for Victoria – green or yellow).

Extra services are provided on match days, but the Metrolink system can get very busy. Visit metrolink.co.uk or follow @MCRMetrolink on Twitter for service updates. It’s suggested matchgoers use the following stops:

There are Metrolink services linking the National Football Museum to many Greater Manchester teams.

All are linked by Metrolink tram services from Shudehill Bus Station. See the Metrolink website for times and further service info. 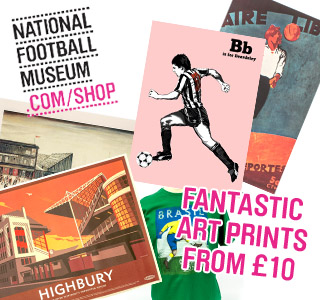