Battle of the Somme football to return to display 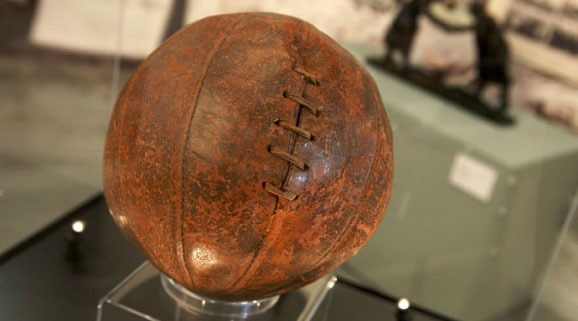 To commemorate the 100th anniversary of the Battle of the Somme, the ball ‘kicked over the top’ will be displayed in the National Football Museum between 5 and  8 of July.

As the only known surviving ball from the Somme (the other one was lost in the fire at Clandon Park last year) it has been displayed at the museum before as part of the Greater Game exhibition, which explored how football and footballers responded during the war effort.

The ball is owned by the Princess of Wales’ Royal Regiment, and is usually on display at Dover Castle.

Dr Kevin Moore, Director at the National Football Museum, said: “As we commemorate the 100th anniversary of the Battle of the Somme, it’s significant to reflect on how football played its part in the war."

“The ball was used by Captain W. P. Nevill as a means of galvanising and reassuring his troops in the most extreme of circumstances, and is a unique symbol of that tragic time.”

The Victoria Cross awarded to Donald Bell, the first professional footballer to enlist into the British Army – will be back on display at the museum on 12 July.  Donald Bell was killed in action at Somme on 10 July 2016.