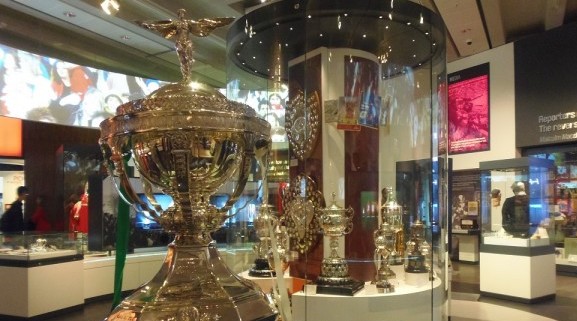 Today marks 80 years since a trophy was first presented to the winners of the British Home Championship: the oldest international football competition in the world.

Dubbed the ‘Unofficial Football World Championships’, the competition was first held in 1884 and involved England, Scotland, Wales and Ireland. For the first 50 years it was played without a trophy until, in 1935, one was made to coincide with King George V’s jubilee and presented to him by the FA on 6 May.

Now on display at the National Football Museum, the trophy has until recently been in the hands of the Irish Football Association.

The competition was played for 100 years bar periods during WW1, WWII and civil unrest in Ireland during 1981. When it was abolished in 1984 England were the most successful team in the history of the competition, with 54 wins.

The demise of the tournament was sealed in 1983 when the English and Scottish FA both announced they would not be entering their teams after the 83/84 competition.

Following the last game, the trophy was left with final winners Northern Ireland.  National Football Museum Director Kevin Moore commented "We’re thrilled to be displaying this magnificent trophy. The competition it represents is the oldest international competition and could be claimed therefore to be a forerunner for the World Cup tournament.

"Our thanks go to the Irish Football Association for allowing us to display this wonderful piece of footballing history".

The trophy is now on long-term display at the museum’s Manchester home.