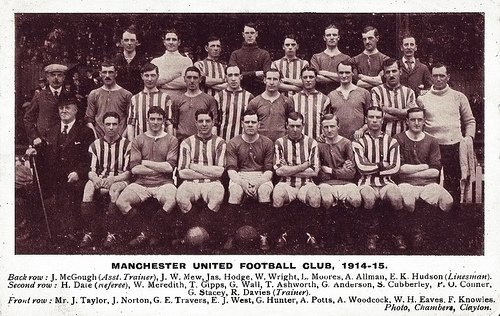 Manchester United and England football legend, Sir Bobby Charlton CBE, is to become a supporter and club champion for Manchester United as part of a project which sees First World War footballers remembered by planting trees in the UK.

The Woodland Trust and the National Football Museum are behind the project ‘For Club and Country’, which will see a living legacy of trees planted in remembrance.

Almost every team in the league today sent players to the front between 1914 and 1918 and many never returned.  Those that did were never the same again. Spearheaded by England and West Ham legend, Sir Trevor Brooking  CBE, the National Football Museum and the Woodland Trust are partnering to remember and commemorate these players.

Sir Bobby said: “I’m incredibly proud of Manchester United’s First World War history. Young, brave footballers such as Sandy Turnbull, alongside staff and supporters from the club made the ultimate sacrifice for all of us today. Together with the National Football Museum and Woodland Trust we will commemorate this great club’s involvement in the First World War. He urged fans to play a part saying "Please get involved to keep the legacy of these heroes alive, and your name will appear alongside mine on the supporters roll of honour.”

Sir Bobby, who as well as being a World Cup, European Cup, FA Cup and Ballon d'Or winner is also Manchester United Club Director and National Football Museum President joins others supporting the project including:

Every team and supporter in the English football league is being offered the chance to donate to ensure their club is commemorated in the remembrance groves at the Woodland Trust’s First World War Centenary Wood at Langley Vale in Epsom. Everyone who does will become part of the supporter roll of honour, which will form a lasting tribute both on www.forclubandcountry.org.uk and at the National Football Museum.

This is the fans chance to pay tribute to their team’s players that were involved in the First World War and to ensure that the contribution the players gave 100 years ago is never forgotten.

National Football Museum Vice President Sir Trevor said: “The Woodland Trust and the National Football Museum’s For Club and Country project is the perfect way to commemorate football’s important role in World War One. By planting groves of trees for every club whose players bravely fought for their country we are creating something beautiful and long lasting for future generations."

“Every football supporter has the chance to learn more about football in  WW1, and get involved to make sure their club is remembered in the football groves at Langley Vale Wood. Make sure your team is represented and see your own name listed on the supporters roll of honour.  Thanks for your support.”

You can help out by pledging as little as £1. Join the roll of honour at www.forclubandcountry.org.uk

The Woodland Trust is the UK’s leading charity championing native woods and trees. It has over 400,000 supporters.

The Trust has three key aims: i) plant native trees and woods with the aim of creating resilient landscapes for people and wildlife ii) protect ancient woodland which is rare, unique and irreplaceable iii) restoration of damaged ancient woodland, bringing precious pieces of our natural history back to life

1.6 million trees planted to date with schools and communities across the UK in remembrance of the First World War through commemorative tree packs

Around 60,000 trees planted to date within our four Centenary Woods.

Over 50,000 people have engaged in the First World War project so far with support for activities such as the Verdun Oaks campaign and Jutland Wood to remember Navy personnel