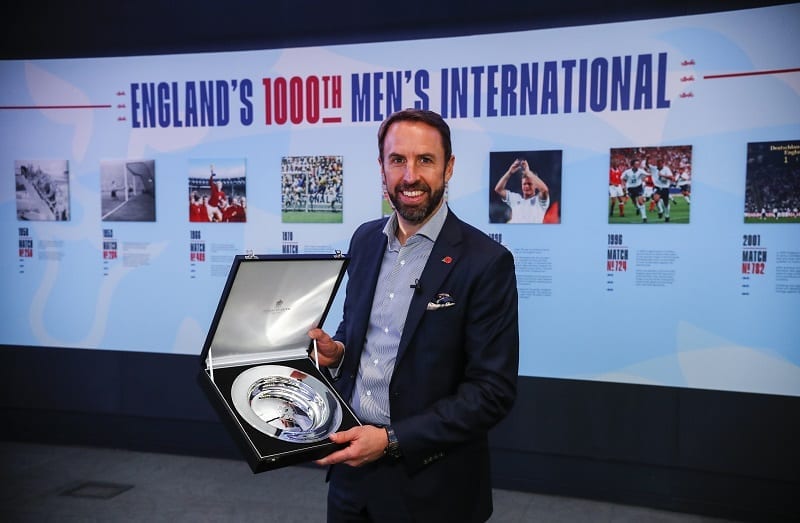 As part of the celebrations around England’s 1000th game the National Football Museum has unveiled a new display. England team manager Gareth Southgate was the first to see the new display which highlights eleven of the team’s most iconic matches over the 999 matches played since 1872.

He then went on a tour of the museum’s main galleries, coming face to face with a shirt worn during the first international match that England played - against Scotland - on 30 November 1872, the Jules Rimet trophy presented to England in 1966 and the match ball used in the 2002 World Cup tie against Argentina in which David Beckham scored a decisive penalty.

As part of the visit, Gareth was then presented with his own ‘legacy’ shirt (number 1071) which will go on display at the museum. From the 1000th game, the senior men’s footballers will now adopt the tradition (already recognised in other sports) of sporting their own legacy number on their shirts.

Tim Desmond, Chief Executive of the National Football Museum, said: "As England’s only national museum for football, we’re delighted to play a part in the upcoming celebrations surrounding the 1000th game. It was a real pleasure to show the England manager around the museum and speak to him about our plans to consolidate the museum’s reputation as the place for everyone to share stories about football, past and present."

The England 1000th Game display will run until the end of the year in the museum’s Pitch Gallery. Elsewhere, St George’s Park will also house a display acknowledging 100 key milestones throughout the journey to the 1,000th game.

Image courtesy of the FA.