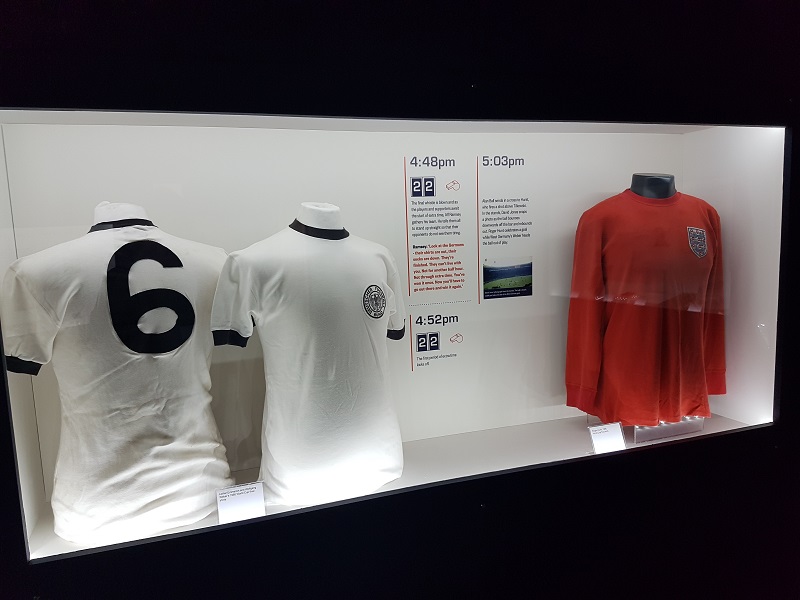 England's greatest footballing triumph will be used to teach young German footballers about the perils of failure.

The transfer of artefacts takes place on Monday 24 April – the day after St. George’s Day - and will include the football used in the infamous final, which England won 4-2, as well as the Jules Rimet World Cup trophy and a sample jar used by England defender Jack Charlton to give world football’s very first urine sample.

Other artefacts making the transfer from Manchester to Dortmund include Brazilian football legend Pele’s training kits and boots, a training kit worn by Bobby Moore and never-seen-before images from the final at Wembley.

Avril Loof, spokeswoman for the German National Football Museum AKA DFB-Museum, said: “That day was a lesson in humility, and the German football authorities believe it can teach our future football heroes a sobering lesson.

“We are going to install the whole 1966 World Cup Exhibition in our DFB Museum in Dortmund as a reminder of what losing looks like. We firmly believe it will offer footballers the inspiration they need to avoid the perils of failure in the future.

“We’d like to thank the National Football Museum in Manchester for agreeing to the transfer and we look forward very much to putting on the exhibition.”

A feature of the exhibition is the stories of the ‘ordinary’ English people who were involved in the tournament, from ball boy John Docherty to England fan Linda Burn, who became the media darling of the 1966 World Cup Final crowd.

1966 World Cup Exhibition is funded by the Heritage Lottery Fund and was launched in partnership with The FA and the Sporting Memories Foundation – an award winning charity that works nationally with older people to bring about health and well-being benefits through celebrating memories of sport.

Interim NFM Director Kevin Haygarth said: “The 1966 World Cup Exhibition was designed to mark the 50th anniversary of the 1966 World Cup tournament by enabling visitors to learn about the wider heritage of the event, to examine its continued legacy as a key moment in England’s recent heritage and to explore its meaning and significance in terms of football history and wider society.

“It’ll be interesting to see how it is received in Germany – I imagine it will be quite painful for football fans to see a German failure writ so large. Still, if they can learn lessons from a 50 year old loss, fair play to them.

“At first we thought they might be taking the p*ss. But then they took Jack Charlton’s World Cup Final sample jar, so I suppose in a way, that’s exactly what they are doing.”