Getting in the game this International Women’s Day 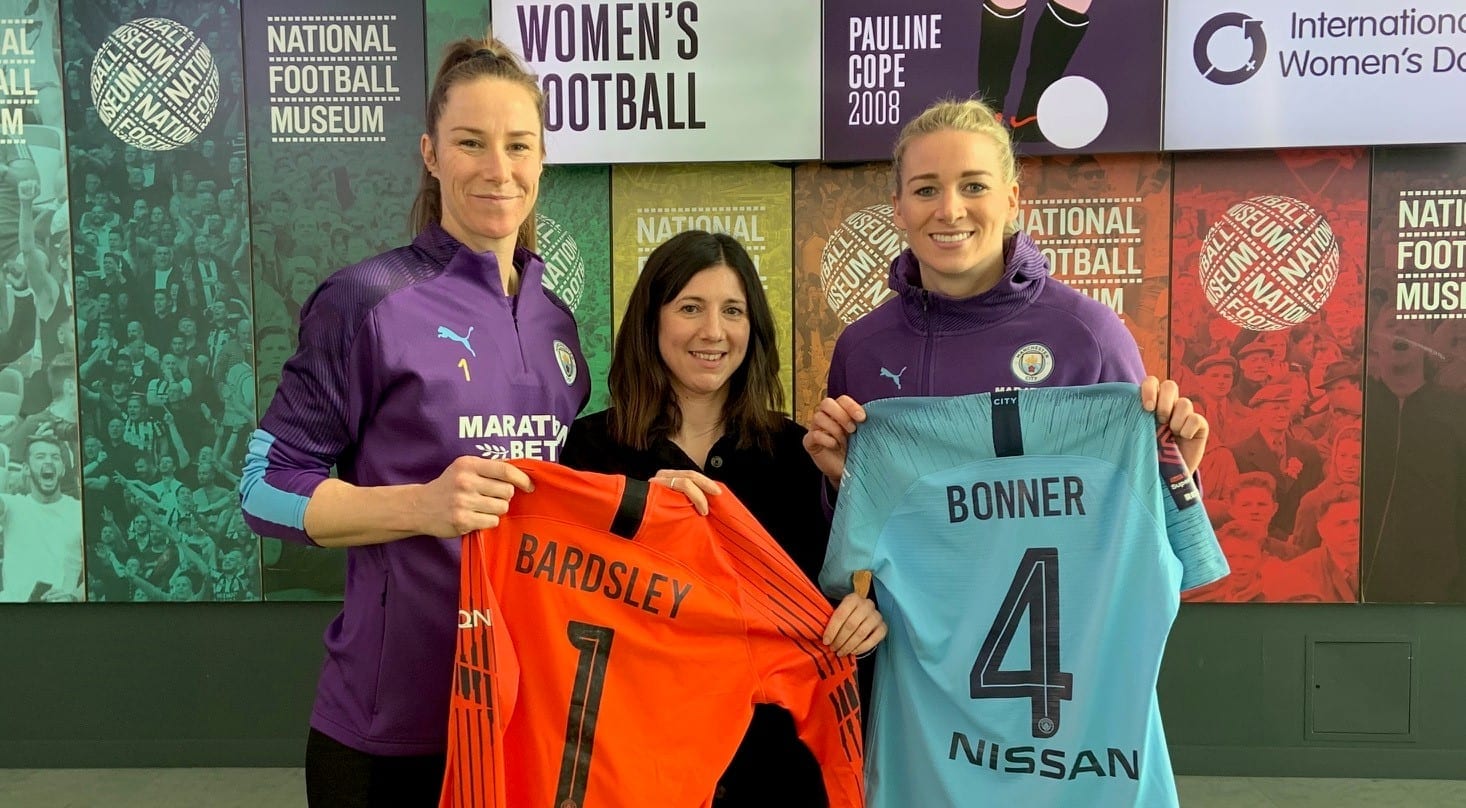 Ahead of International Women’s Day, Manchester City and England stars Karen Bardsley and Gemma Bonner dropped into the museum to donate some of their prized possessions into our ever-growing women’s football collection.

The players presented the items to Belinda Scarlett, Curator of Women's Football (pictured).

City ‘keeper Bardsley donated caps won at the 2015 FIFA Women’s World Cup and the 2017 UEFA Women’s European Championships, as well as the shirt she wore during the final game of City’s triumphant 2015/16 Women’s Super League campaign, securing the title with a win over Chelsea. The 35-year-old also donated the shirt worn during the 2019 Women’s Continental League Cup final, saving two penalties en route to victory over Arsenal.

Long-serving defender Bonner donated her shirt from that final, during which she kept a clean sheet before City’s shootout victory. The 28-year-old also handed over her Manchester Bee Puma boots from the opening game of the 2019/20 Barclays FA Women’s Super League season against Manchester United – a fixture which broke the FAWSL attendance record at the time.

Karen and Gemma chatted to visitors and signed autographs during their time in the Pitch Gallery.

The visit from two Manchester City stars is just part of the museum’s activities around International Women’s Day, and reflects our drive to increase representation of women in football to 50% across our galleries and platforms.

Every Thursday throughout March, we will be encouraging visitors to join us and our teammates from the University of Salford for our Wikipedia Edit-a-thons, increasing the presence and representation of women’s football history on the world’s largest online encyclopaedia.

On International Women’s Day itself (Sunday 8 March), the museum will be hosting a series of tours dedicated to the women’s game, showcasing some of the untold stories and fascinating objects from across football history. The tours will be running at 11am, 1pm and 2pm, and are free for National Football Museum admission ticket holders. Book your place in advance by clicking here.

The museum will also serve as the hosts for the debut of Mikron Theatre’s latest production, Atalanta Forever, a play based on women’s football in the 1920s. Join the team for the opening fixture of their 43-date tour as Atalanta AFC take on prejudice, esteemed opposition and football’s governing body. The show kicks off on Friday 18 April at 7:30pm. Tickets are selling fast, so click here to book now!

Finally, our Goal Click exhibition will be running in the Pitch Gallery until Friday 15 May. The photographic display documents the journey to the 2019 Women’s World Cup from the perspective of some of the world’s best players via disposable cameras. See the behind-the-scenes stories of 2019 unfold through the eyes – and cameras – of those who were there.

To see the full line-up of events and activities, please visit our What’s On page.