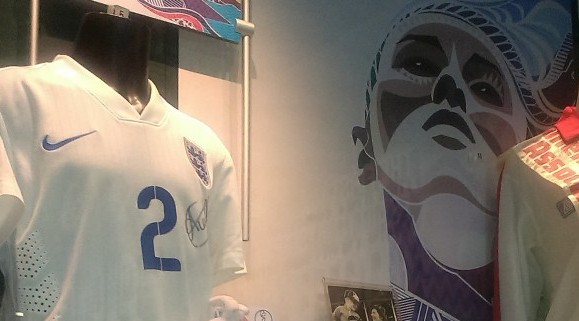 In celebration of the start of the FIFA Women’s World Cup tournament in Canada a selection of never-before-seen objects have gone on display at the museum. The objects offer just a taster of the stories of inspirational women in sport.

Women’s football continues to gain popularity, with 2.62million women and girls playing football in the UK in 2012.

Manager Mark Sampson leads the England Women’s team into the seventh FIFA Women’s World Cup in Canada, starting 6 June, and Manchester City defender Steph Houghton will captain the 23 player squad, who between them scored an impressive 52 goals during the 10 qualifying matches to finish top of their group. Alex Scott’s match worn shirt, from a friendly against Sweden played during the campaign, is just one of the items featured; along with a wide range of special items from the history and greats of the women’s game, including June Kelly’s Pride of Britain award, Sylvia Gore’s MBE and Sheila Parker’s England caps.

National Football Museum Hall of Fame inductees, Sheila Parker and Sylvia Gore MBE both feature as big influences on the re-popularising of the game in Britain.  For 30 years Sheila was a major force in the women’s game and has won a host of trophies with six different clubs and been capped 3 times for her country. Sylvia was similarly a huge star and created history when she scored the first goal for an official England international women’s team in 1972. That appearance in a 3-2 win over Scotland only took place after she had spent over £2,000 to progress through national trials. Known as the ‘Denis Law’ of women’s football, she once scored 134 goals in a season.

Another leading lady featured is June Kelly MBE, a school worker who also voluntarily runs Abraham Moss Warriors football club which she founded in 2001 in Cheetham Hill, Manchester. Frustrated by the lack of opportunities for young people in the area, she started running a football coaching session to keep local youngsters away from gangs and crime. She now has over 150 registered players, offering football coaching but also popular numeracy and literacy programmes for youngsters from all backgrounds. One of the founders of MCFC's 'City In The Community' programme, June won the Pride Of Britain award in 2013.

The display is on level one of the museum and runs until the end of August.