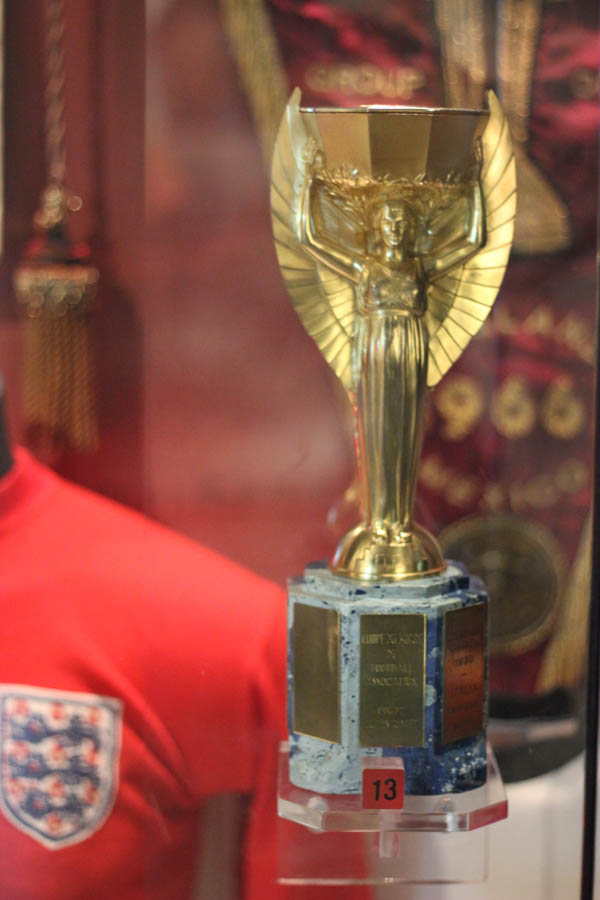 Fifty years on from its famous discovery by Pickles the dog, the Jules Rimet trophy is back on display at the National Football Museum.

From 21-27 March, England's most famous sporting trophy had been popping up at locations around Manchester, as the museum commemorated the golden statue's previous disappearance, 50 years ago.

50 years ago #OnThisDay the World Cup was stolen from an exhibition of rare stamps in London. #ThankYouPickles https://t.co/j1YzovwN3c

In 1966, the World Cup trophy, which depicts Nike, goddess of victory, and was named the 'Jules Rimet' in honour of FIFA's longest-serving president, was famously stolen from an exhibition of stamps at Westminster Hall, London. A week after the robbery, and following a botched attempt to pay a ransom, a black and white mongrel named Pickles became the unlikely hero when sniffing out the trophy, wrapped in newspaper under a hedge near his home.

The National Football Museum have been sharing the story of Pickles, and of the version of the Jules Rimet trophy that is now on permanent display at the museum, around the city as they prepare for a large scale celebration of all things 1966 later this year.

The story has also featured on BBC 5 Live, BBC Breakfast, and a number of other media outlets during the last 10 days.

Museum Director Dr Kevin Moore @BBCBreakfast this morning. Thanks for having us over! pic.twitter.com/VRVZ51Gtd4

The trophy people have been seeing is an exact replica, made in 1966 after the robbery. This replica was swapped for the original in the Wembley dressing room immediately after the trophy presentation, following the World Cup final. For 4 years this was the trophy that signified England were World Champions, travelling with the team, being photographed and displayed as the real thing. Very few people knew a swap had even taken place; an exhausted Nobby Stiles received the replacement in the dressing room, but was reportedly the only player to notice.

Fifty years ago today, Pickles the dog found the Jules Rimet Trophy, which this week paid a special visit to OT... https://t.co/Uhse1tZ86y

The original trophy was sent to Mexico for the  1970 World Cup, and was awarded to Brazil to keep after they won the tournament for the third time. The original was subsequently stolen in 1983. The thieves in Brazil claimed it had been melted down, and the trophy was never seen again.

In the meantime, the replica, made in secret, was reported to have been returned to its creator, a Mr George Bird, who kept it stored secretly until his death in 1995. Only when his family discovered the World Cup in a box under Mr Bird's bed did the story of England's World Cup begin to be unearthed.

Thanks to some failed thieves, a doggy detective and a secretive Bird, England still has a World Cup trophy we can call our own.

The 1966 Jules Rimet trophy can be seen, alongside the ball from the 1966 World Cup final, every day at the National Football Museum, Manchester. A new exhibition, in conjunction with The FA, celebrating England's hosting and victorious World Cup tournament will open in Manchester and at Wembley Stadium in June 2016. It will feature famous, and not-so-famous stories from all aspects of the competition.