Karen Carney inducted into the Hall of Fame 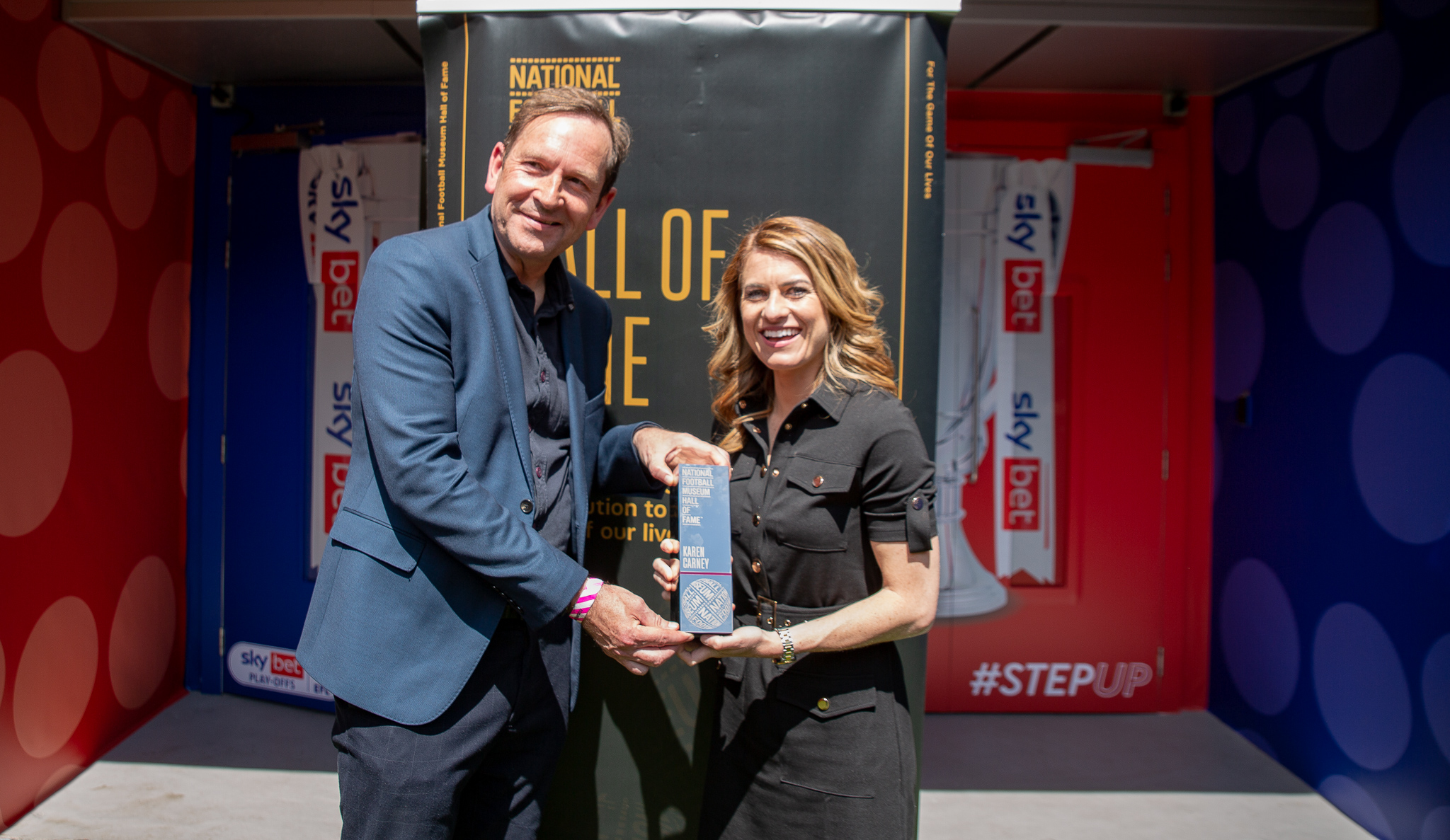 England star Karen Carney has today been inducted into the National Football Museum Hall of Fame at a special ceremony in front of close friends and family at Wembley Stadium.

The 144-cap Lionesses legend received the honour from former teammate and fellow Hall of Famer Rachel Yankey, who presented her with the award on the pitch where Carney earned her 100th cap, captaining the Lionesses against Germany in the first ever women’s international match to be held at Wembley.

Representatives from Carney’s former clubs Chelsea Women, Birmingham City and Arsenal were on hand to witness the occasion, while the Chicago Red Stars shared messages of support from afar.

Carney has become the 19th female to be inducted and the first since Alex Scott received the honour in November 2019. Her induction coincides with the reopening of the National Football Museum in central Manchester and the official launch of the Hall of Fame exhibition which showcases the stories of Hall of Famers and objects of significance throughout their careers. Several objects have never been on display before. The exhibition will feature female and male inductees equally as part of the museum’s ongoing commitment to promoting diversity and inclusion.

Judges voted unanimously to induct Carney in recognition of her outstanding football career, her involvement in advancing women’s football and her overall contribution to the game on and off the field.

Tim Desmond, Chief Executive, National Football Museum said: “We are delighted to induct Karen Carney into the Hall of Fame. She also takes her place in our new exhibition alongside other legends who’ve made a massive impact in football, on and off the pitch.

“When we were working on the exhibition we considered key themes of courage, creativity and resilience. Karen Carney had all those attributes as a player while being an inspiration to others and a pioneer for women’s football.”

Carney made her debut for England in 2005 at just 17 years old and went on to become the second most capped England player with 144 appearances over 14-years up until her retirement in 2019, including at four European Championships and four World Cups. She became the youngest women to earn her 100th cap in a historic moment captaining the Lionesses against Germany in the first ever women’s international game to be played at Wembley Stadium. Carney was also part of the Great Britain women’s team that competed in the 2012 London Olympics, starring in all four games on home soil.

Carney then joined the Chicago Red Stars at the formation of the WPS, the precursor to the National Women’s Soccer League, scoring 3 goals in 38 appearances for the club.

After returning to Birmingham City for a second time, Carney made her debut for Chelsea Women in 2015 under manager Emma Hayes. It was there that she would play out her career, later becoming captain and adding an FA WSL title and a fifth FA Women’s Cup to her name.

Before her retirement from professional football, Carney received an MBE for services to football and became the first woman to be inducted into the Birmingham City FC Hall of Fame. She continues to have an impact off the field as well, working as a regular pundit for live football on BT Sport and the BBC, and contributing to various charities including The Darby Rimmer MND Foundation in support of her friend and former professional footballer Stephen Darby who was diagnosed with Motor Neurone Disease (MND).