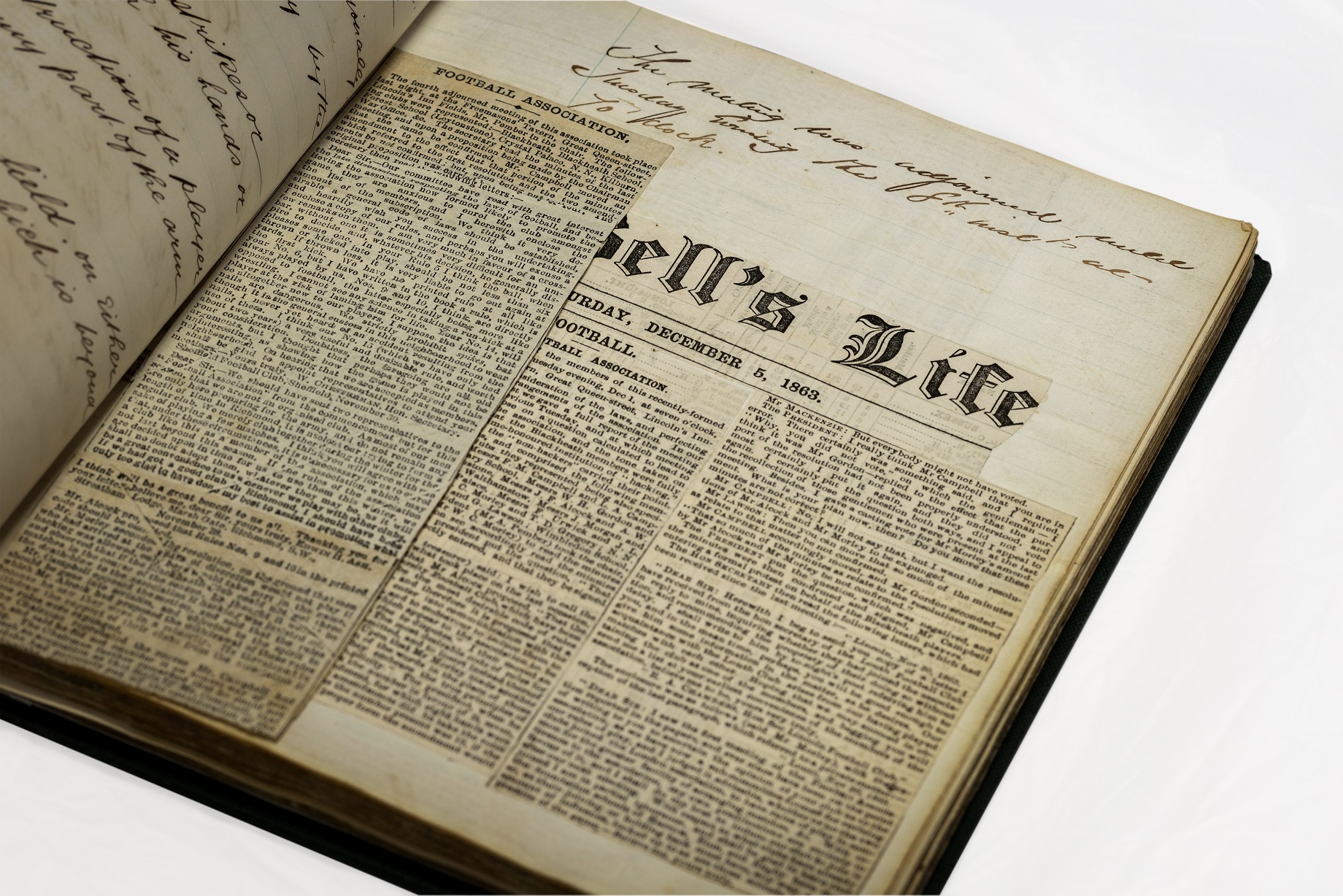 A manuscript which details the very birth of football will go on display at the National Football Museum, with a planned reopening of 27 May 2021.

The handwritten Laws of The Game from 1863 contain the very first laws of football – the origins of the global sport played and watched by millions of fans today. It is the most significant book related to football. In a sense, the ‘Magna Carta’ of the beautiful game.

As the museum marks 20 years since it first opened, a bumper summer is planned with new exhibitions and marquee signings unveiled to the world in the opening weeks.

The museum will have been shut for 11 months during three national lockdowns by the time it reopens in time for the May half-term break. A star-studded line-up of new objects and exhibitions includes:

Without this book, the world would be without its most popular sport. The 1863 Minute Book features the 13 original Laws of association football, which were written by Ebenezer Morley, the first secretary of The Football Association. The FA formed in October 1863 with the aim of creating a single set of laws. The Laws of the Game going on display signals the start of a new partnership between the museum and The Football Association.

For almost two decades the National Football Museum’s English Football Hall of Fame has celebrated the great and the good of the game. This is the first time the museum has put on a full-scale exhibition showcasing some of those who’ve made an outstanding contribution to football, both on and off the pitch. Hall of Fame inductees include Lily Parr, Bobby Charlton, Faye White, Patrick Vieira, Rachel Yankey, Ian Wright, Kenny Dalglish and Hope Powell. Recent inductees include Justin Fashanu, Alex Scott and Cyrille Regis. The exhibition is set to include new inductees for 2021.

The oldest surviving FA Cup will be returning to the museum, having been acquired at auction by new custodians Manchester City. The trophy was awarded to victorious clubs between 1896 and 1910. The trophy had previously been on display at the museum since 2005 and will now return on loan courtesy of its new owner, His Highness Sheikh Mansour bin Zayed.

This new photographic exhibition coincides with the rescheduled UEFA EURO 2020 which is being held across the continent for the first time in the competition's 60-year history. This exhibition will focus on Euro 96 which took place in England and saw the host country have a fantastic run only to lose in the semi-final to Germany on penalties. The exhibition will look at popular culture of the period when the Three Lions song reverberated around stadiums as football came home.

The museum celebrates Lily Parr – England’s first international women’s footballer - by creating a gallery to the player inside the museum. The new gallery will feature new objects and previously unseen photographs of Lily and her teammates. Born in St Helens in 1905, Parr was one of the most astonishing and important figures in English football. It’s believed she scored more than 980 goals in a 32-year career. The new gallery has been made possible thanks to a £55,440.00 grant from the Association of Independent Museums (AIM) Biffa Award History Makers.

A key object which will take on new significance is Maradona’s Hand of God shirt. It was worn by the icon at the 1986 Mexico World Cup when Argentina knocked out England. This jersey takes on extra poignancy with the death of the legend last year.

The museum has a new and improved access offer with both a BSL video guide and visual story helping visitors familiarise themselves before their visit.

As long as government restrictions allow, the museum hopes to reopen on 27 May 2021, with tickets on sale early April. To receive prior notification of ticket sales sign-up to the museum’s newsletter.