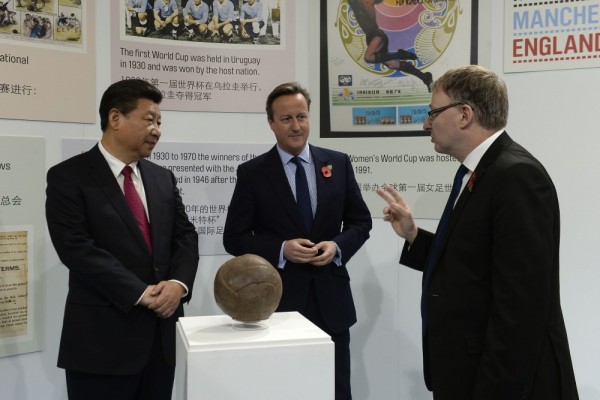 The National Football Museum was delighted to participate in the official visit to Manchester by Prime Minister David Cameron and Chinese President Xi Jinping. Museum Director Dr Kevin Moore and Chair of Trustees Paul Dermody OBE took along star objects from the museum’s collection to the event at the City of Manchester Stadium. The Jules Rimet trophy won by England in 1966, a football used in the first World Cup final in 1930 and a copy of the FA’s original laws of the game from 1863 were all on display. An official replica of the minute book of the Football Association commissioned by the National Football Museum and The FA was presented by the Prime Minister to President Xi Jinping.

Paul Dermody handed over a Hall of Fame trophy to the President for ex Manchester City player Sun Jihai who was also at the event. The honorary Hall of Fame award was given in the museum’s ‘special award’ category to tie in with the official visit , celebrating his position as the foremost Chinese player in the English game and to recognise his contribution in bringing English league football to a Chinese audience.

The museum also announced a partnership with the Linzi Football Museum in Zibo, China. The two organisations will work together to promote their shared objectives of communicating football culture to a world-wide audience and will cooperate on special projects, exhibitions and learning agendas.

Dr Kevin Moore, Director of the National Football Museum said ‘We are delighted to have had the opportunity to show some highlights of our collection to the Prime Minister and President. We are very much looking forward to working more closely with the Linzi Football Museum. While England is the birthplace of the modern game as we know it, we have always acknowledged that the origins of the game lie in China. We will be sharing our knowledge to benefit both organisations and their respective audiences.’