The nation’s greatest football shirt 2020-21, as chosen by our curators 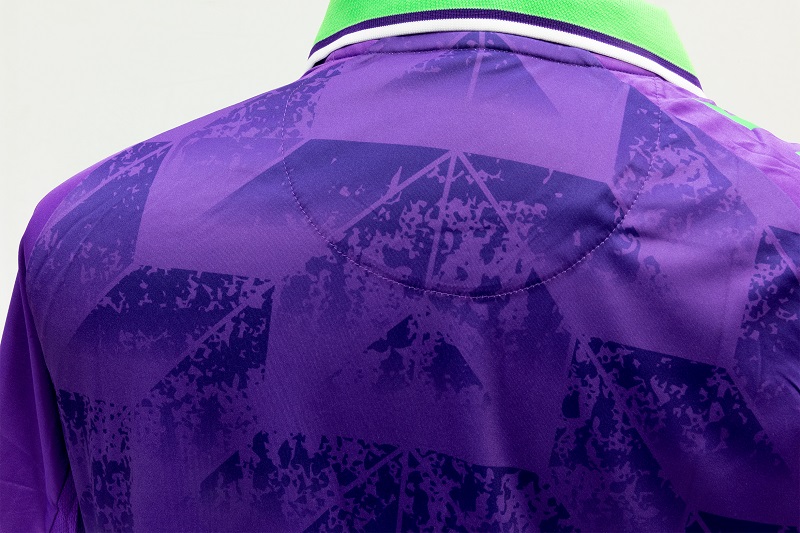 National Football Museum curators have run the rule over this season’s new football shirts and selected the country’s very best.

The museum’s expert team pored over hundreds of shirts from Premier League, WSL, Women’s Championship and non-league and finally settled on a Top 25.

After weeks of scrutinising home, away and third shirts, museum curators have judged Bristol City’s away offering – a purple and lime creation designed by Hummel – as the most striking of the 20/21 campaign.

The Championship side fended off stiff opposition from Manchester City away (2nd), Everton third (3rd) and Arsenal home (4th), who all boast smart shirts this season.

Manchester United’s third strip – the ‘zebra’ was described by judges as ‘undeniably striking’ and finishes 13th.

The museum’s Top 25 comes at a time it has extended its Strip! How Football Got Shirty exhibition until Spring 2021. The exhibition has more than 200 shirts on display.

I’m usually a purist when it comes to stripes, but I like what Umbro have done here with the spray-paint style gradients. Extra points for continuing the stripes on the back too. (Tim)

I really appreciate a set of kits that employ the same design in different colourways, and these Palace kits are a great example of that. The women’s team have the benefit of a less intrusive shirt sponsor, so they take the prize here. (Tim)

We loved last season’s Umbro offerings for the Tigers with the home shirt featuring in the exhibition. Yet again this shirt incorporates some of their identity as vibrant amber leaps out against a charcoal and black canvas with the KCom stadium stanchions acting as an understated pattern. (Jon)

Halifax gave their supporters some different options and they opted for this gem. This shirt combines the rarely used combination of white, gold and burgundy. It shouldn’t work but the jazzy pattern somehow sees it through. (Jon)

Stark purple gives way to an eccentric backdrop graphic inspired by the steelwork of the Tyne Bridge. One of the most daring shirts in the Premier League and its combination of boldness and heritage works well. (Jon)

It’s great to see Bury return and their new bespoke kits hint at a bright future. Eco-friendly as it’s made from 16 recycled plastic bottles, the shirt was selected by members of the Shakers community. Maroon and gold are a stylish colour combination and should be a hit both on and off the pitch. (Jon) 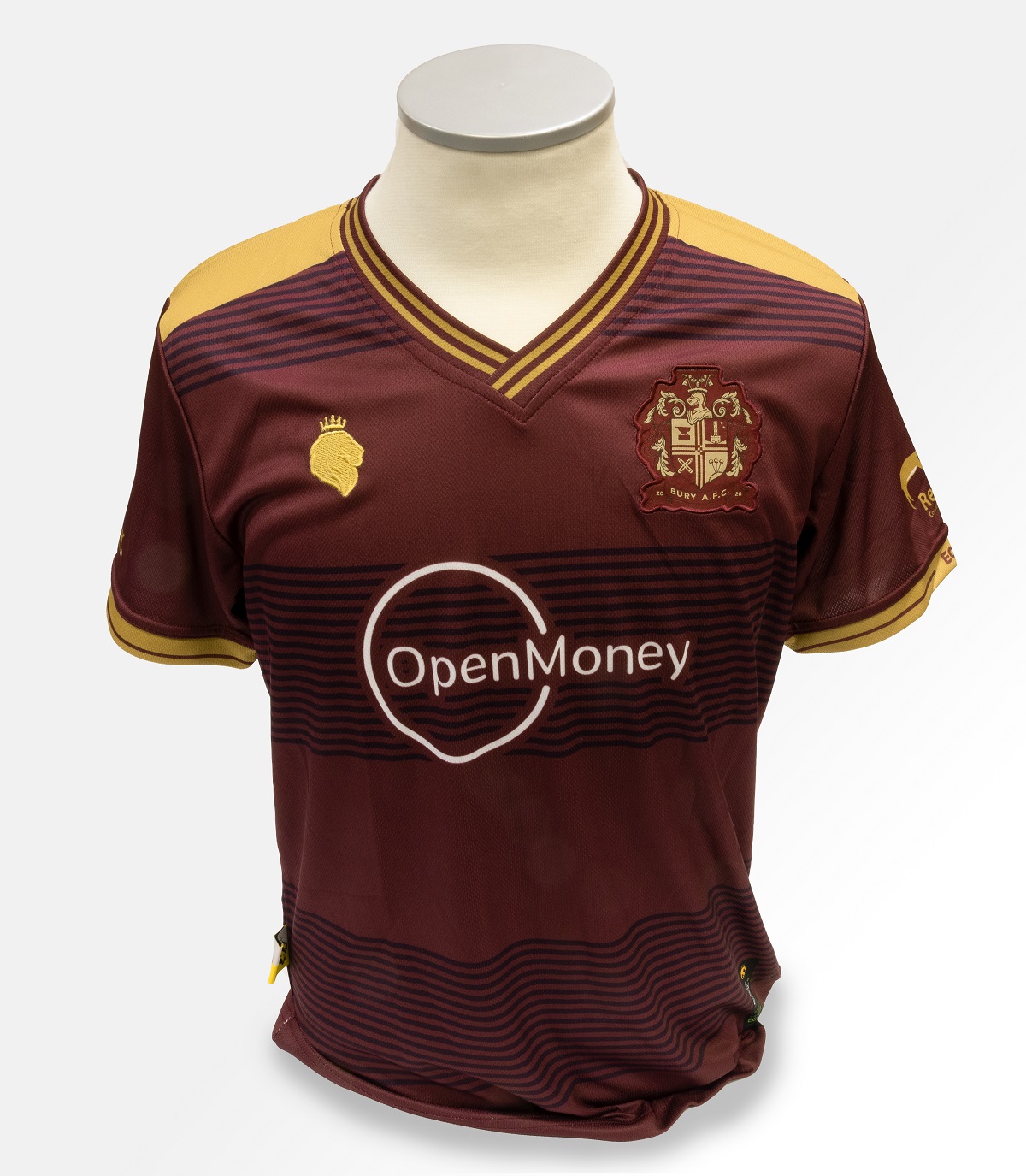 With more than a subtle nod to their not so subtle Portuguese links, this understated shirt is a classy affair and shows that you don’t always need to go OTT in shirt design. (Jon)

Norwich City's bizarre new third kit in black, white, fuchsia and purple breaks all the rules, but makes a great impression. It completes an outstanding trio of kits for the Canaries this season. (Tim)

I love a 90’s style polo collar and Dale have certainly delivered the goods. The 90’s connection goes deeper though as its retro inspiration is based on a classic away kit from the middle of that decade. (Jon)

Navy and gold 125th anniversary shirt which shows that sometimes less is more. A great colour combo, which is sleek and has a classy, minimalist design. (Tim)

Like Rochdale, this has a retro collar and cuffs but takes the 90’s vibes one step further. White pinstripes work well against the red backdrop, but the real winning addition is the black trim on the collar. (Jon)

I don't think I can remember a United shirt that has divided opinion so much as this. Whether you choose to describe it as zebra stripes or the dazzle-camouflage from a WWI battleship, it is undeniably striking. While it will likely be worn only a handful of times this season, it’s bound to become a cult classic, remembered for years to come. (Tim)

No curatorial bias needed (Jon is a Blackpool fan), this is smart. Even though it’s simple and sleek, the vivid tangerine really pops against the shiny navy backdrop. A very under-utilized colour combination, we featured a late 70s Shrewsbury Town shirt in the exhibition that made me think why it isn’t used more. This is further evidence! (Jon)

Lewes put their own spin on a classic late 80’s design. The manufacturers Kappa also supplied AC Milan and the results are great. Easily the best kit in the Women’s Championship. (Tim) 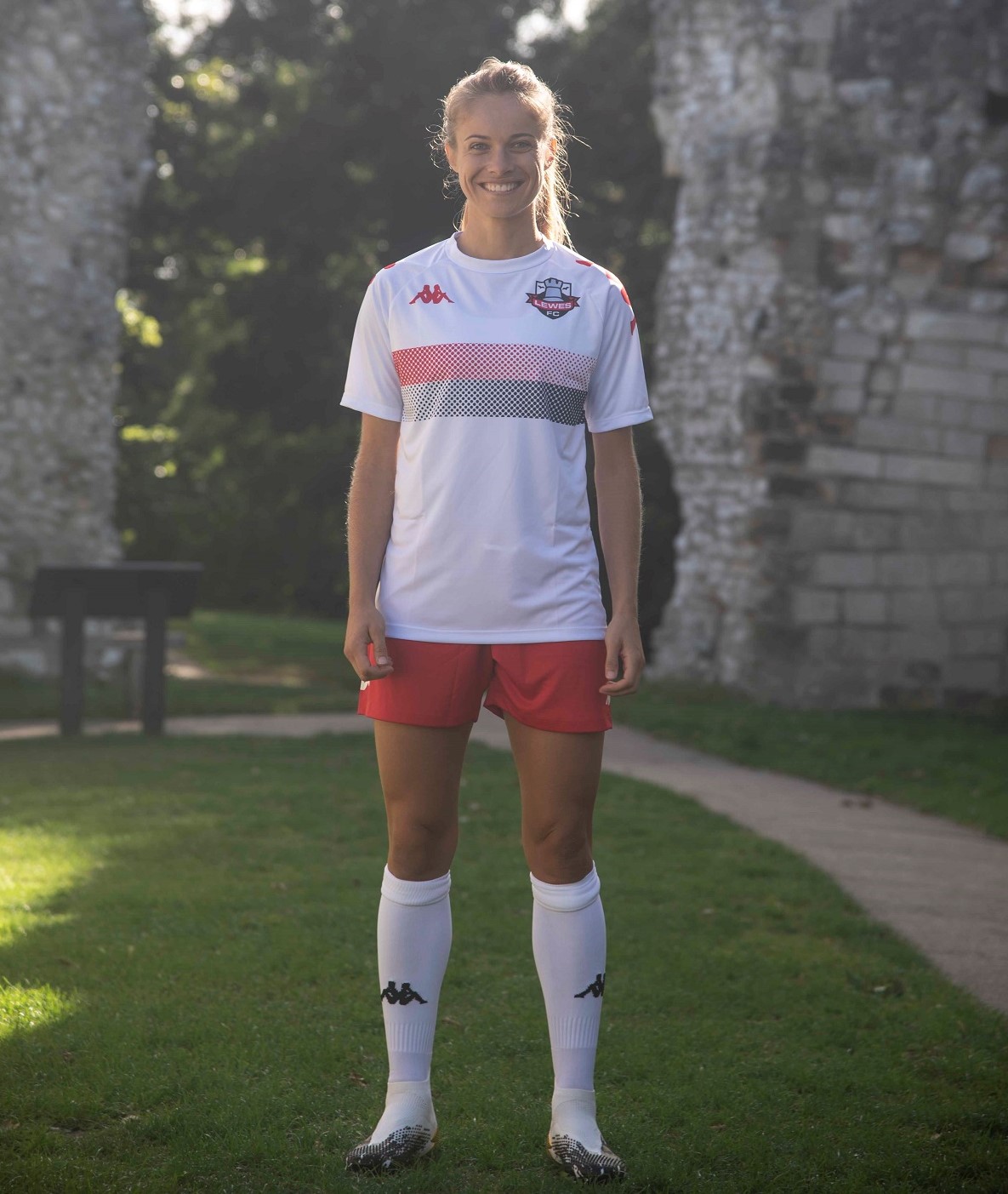 Lewes FC away kit by Kappa

Their away shirt designed by Phil Galloway features in the exhibition but it’s fantastic to see 1874 striving for boldness once again on their new home offering. Created through an open design competition, the players and management were also involved in the creative process. (Jon)

Created in partnership with Bristol Pride, who challenge homophobia, biphobia, transphobia and promote equality and diversity. The vibrant eye-catching shirt dons a ‘Gas Girls’ club crest which features a female pirate. This is a progressive women’s team who want to establish their own identity, independent from the men’s team. (Jon)

One of those shirts where a sponsor can elevate the product – the deliciously twee sounding Huski Chocolate adds to the 90’s vibes. A throwback to their green and white half and half shirt from 1996/97, this goes one step further with optical effect central shading. (Jon)

An updated reimagining of an early 90’s gem featured in the museum’s Strip! exhibition. White, navy and orange are too rare a combination, we want to see more of this! (Tim)

This shirt is the definition of elegant and packs a high level of attention into one shirt. Green and gold is a winning colour combination and the shirt has environmentally friendly credentials too as it’s made from recycled plastic bottles. (Jon) 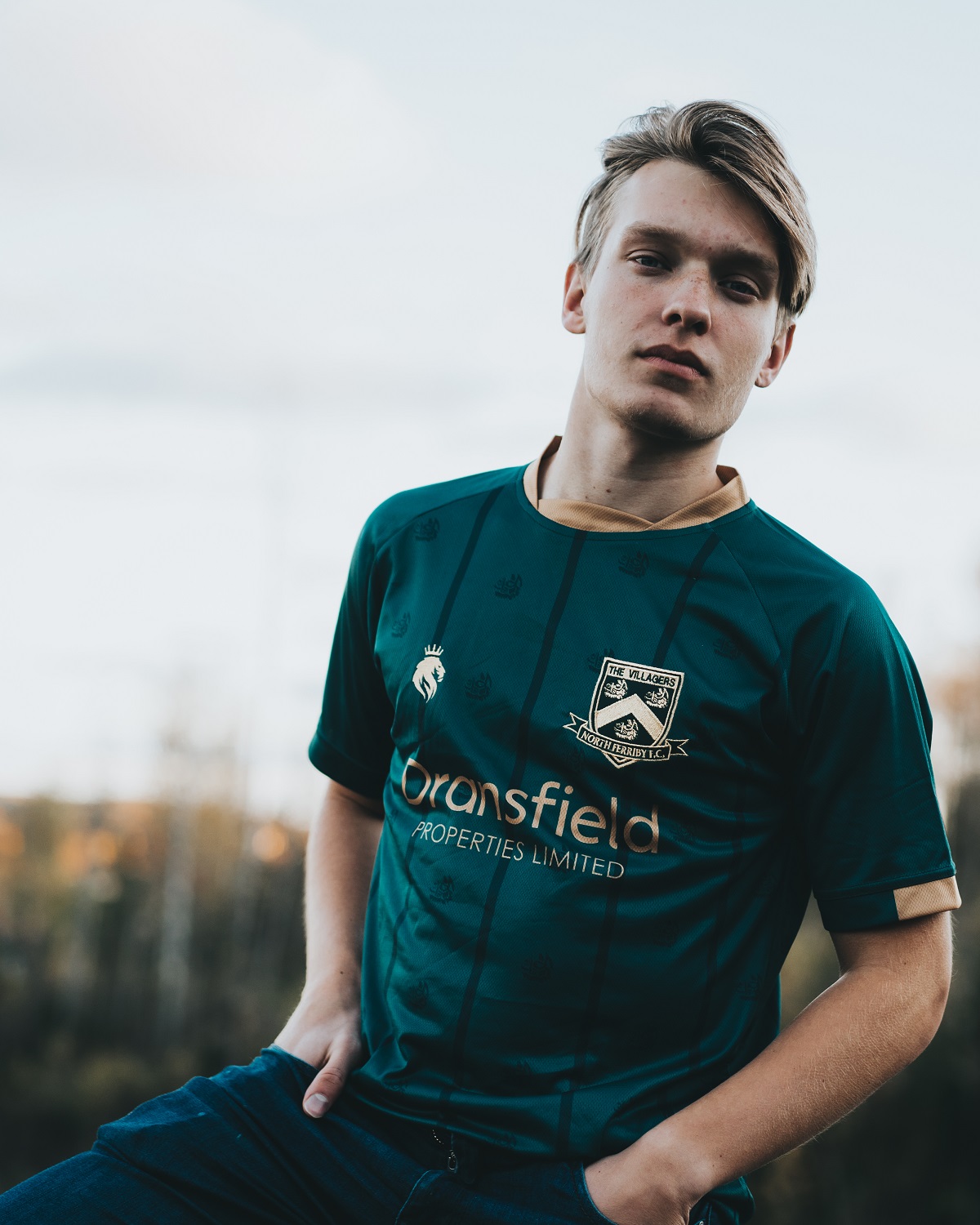 The world’s most eco-friendly football club demands a shirt to match. Made from 50% sustainable bamboo mix, the dazzling black and white zebra print pattern nods to the black and white stripes of yesteryear. (Jon)

Another fantastic offering from Adidas, I love the graphic print of the chevrons in the red body of the shirt. The mottled blue and pink (officially ‘legend marine / light flash orange’) third kit is a triumph too. (Tim)

Hummel’s relationship with the Toffees gets off to a winning start on a very rarely seen ‘seafoam green’ football kit. Normally associated with 1950s Fender guitars, it makes for a gorgeous Everton strip. Shame it’ll not be worn more than a handful of times. (Tim)

While we are not huge fans of the ‘mosaic’ home shirt, the away is fantastic. The design draws on the architecture of Manchester. It’s inspired by the city’s industrial and creative past, present and future which you can discover more about at the nearby Science and Industry Museum. The actual building in the design could possibly the Upper Campfield Market Hall, which is only a short walk from the Museum. The paisley third shirt is bonkers in a good way. (Tim)

Purple and lime wouldn’t normally be considered a desirable combination, but this is an absolute banger. For Robins fans these colours also evoke memories of a famous night at Anfield in 1994 when they knocked Liverpool out of the FA Cup. The pattern has a strong resemblance to the classic Netherlands shirt from 1988 which can’t be a bad thing. The goalkeeper shirts are quite something too! (Jon) 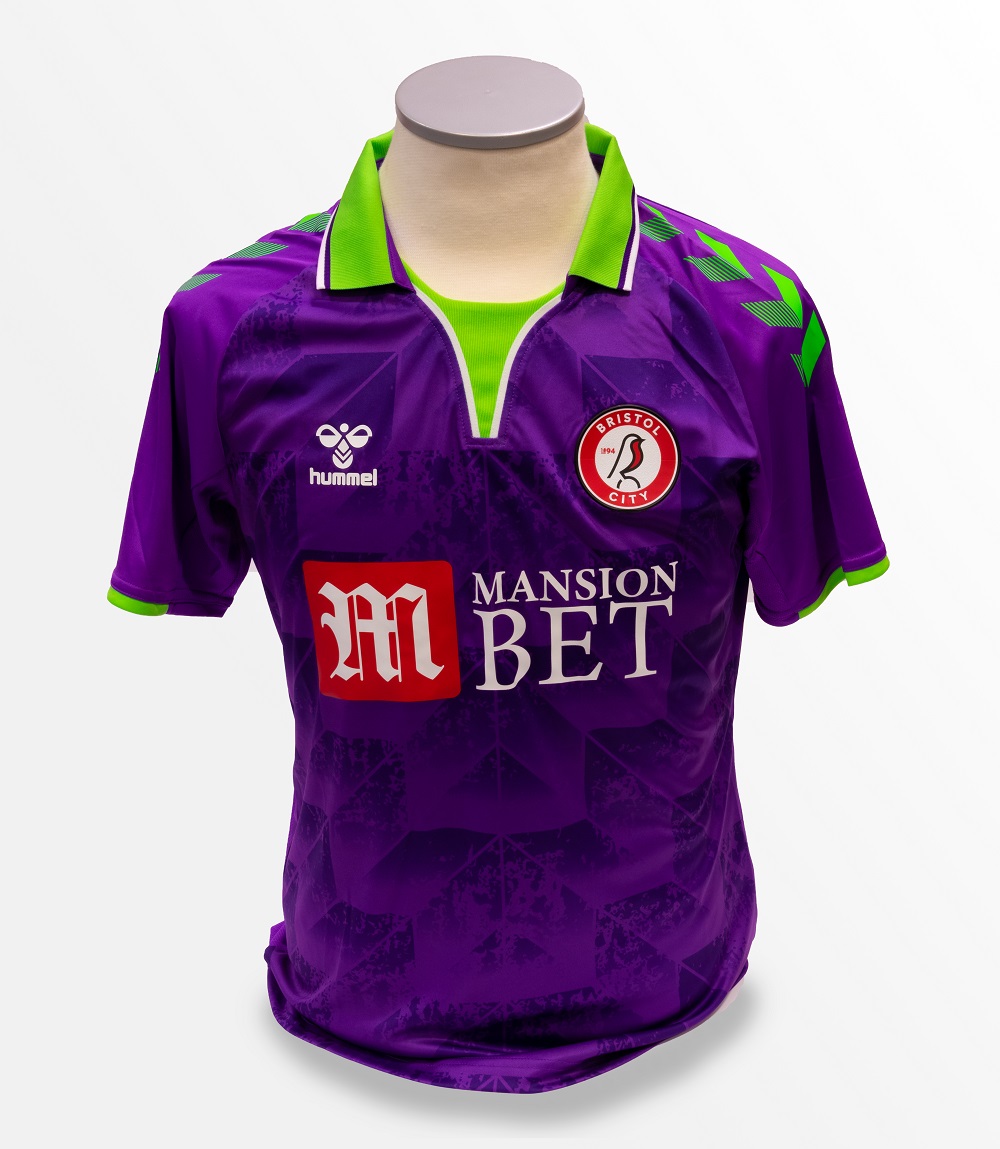 You can hear more from Jon and Tim in their Strip! Curators' Tour over on our dedicated exhibition website.