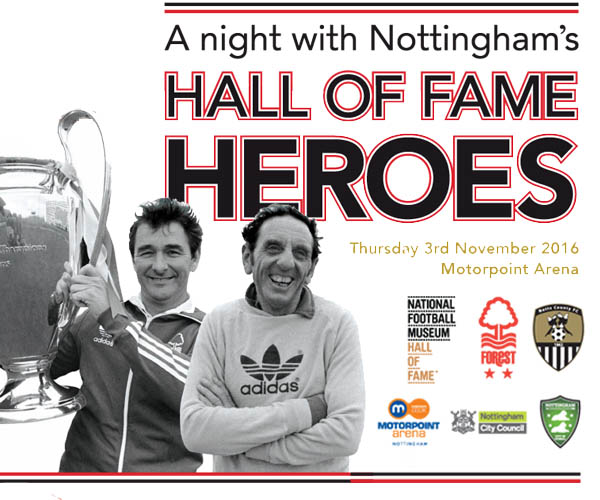 Details of a new National Football Museum Hall Of Fame event, celebrating two more inductees in the 'teams' category, have been confirmed this week.

Nottingham Forest's 'Miracle Men', the side who won the European Cup twice in 1979 & 1980 are to be inducted, alongside a special award for neighbours Notts County as the oldest football league team in the world.

The special event takes place at Nottingham's Motorpoint Arena on November 3rd. Over 3,000 football fans and enthusiasts are expected to attend the gala event, which is hosted by Nottingham City Council, and celebrate Nottingham’s status as the City of Football.

Fans will get the chance to meet the stars from past and present as they share their favourite goals and moments from Nottingham’s rich footballing history as well as looking forward to the future of football in the City and the achievements of the Nottingham City of Football project.

John McGovern, Nottingham Forest double European Cup winning captain, commented; “It is an incredible honour for us to be inducted into the National Football Museum Hall of Fame and we are grateful to Nottingham City Council for helping us to share this fantastic event with the people of Nottingham.”

Les Bradd, Notts County’s record goal scorer added; “Notts County has a very special place in the world of football and we are delighted to be given such an accolade on what will undoubtedly be a very special night for football in the city.”

Tickets for the event are on sale now and can be purchased via the Motorpoint Arena website at www.motorpointarenanottingham.com

To find out more about this year's other Hall Of Fame inductees and the event at the National Football Museum on October 19th, visit https://www.nationalfootballmuseum.com/whatson/national-football-museum-hall-of-fame-2016