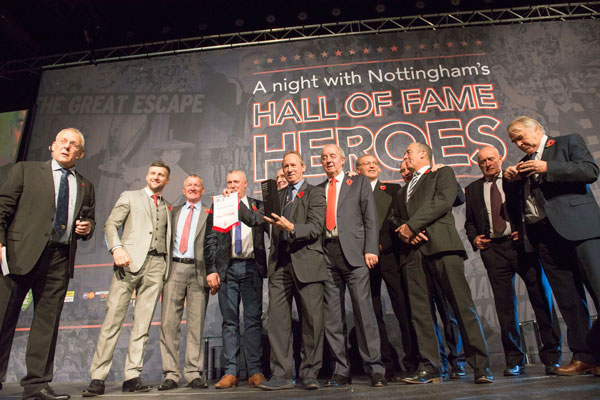 The Nottingham Forest team who famously won back-to-back European Cups in 1979 and 1980 became just the 8th side to be inducted to the Hall Of Fame, joining the ranks of the Busby Babes, Bob Paisley's Liverpool and England's World Cup winners.

Notts County FC were honoured with a Hall Of Fame special category award, as the world's oldest football league side.

The event at Nottingham's Motorpoint Arena marked the end of the 'City Of Football' year, and was a fitting celebration of the football legacy achieved by the city's two historic clubs.

One of the founders of the Football League in 1888, Notts County were originally formed in 1862 and are the oldest Association Football league club in the world.

The club's rich history was celebrated at the event, with record goalscorer Les Bradd receiving the Hall Of Fame trophy on behalf of the club.

Notts chief executive Jason Turner said: "Everyone at Notts County is thrilled that our status as the world's oldest Football League club has been recognised in this way.

"It is an honour for us to be inducted into the Hall of Fame alongside some truly great sides which, as of last night, includes our neighbours from across the Trent. Many congratulations to them.

County's near-neighbours Nottingham Forest brought club football's biggest prize, the European Cup (now the Champions' League) to the banks of the Trent for two consecutive seasons in 1979 and 1980.

Inspirational manager Brian Clough took his team from Division Two to Division One Champions and conquerors of Europe in consecutive seasons.

Described by Clough as "The Picasso of football", Robertson's individual award was also highlighted at the event.

"It's a fantastic honour for me," said Robertson.

"I'm just pleased that I did my job in football - that helped me get that award.

"I'm a wee bit embarrassed about it because without the rest of them, I would never have got it. I played with great, great players; I was fortunate enough to do that. Playing with them got me the award.

"It's nice, not just for Forest but for the whole city, with Notts County being inducted. It gives the city a lift," Robertson added.