Pitch to Pixel: The World of Football Gaming, the first major exhibition of its kind, opened at the National Football Museum in Manchester today (October 23rd). 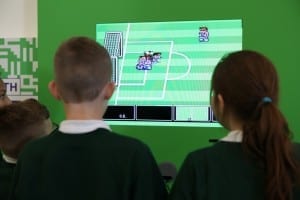 The museum has partnered with two of the biggest players in the football gaming world - EA SPORTS and Sports Interactive, the names behind the hugely popular football franchises FIFA and Football Manager, to provide expertise for the exhibition, with support from Arts Council England.

It is the first time the relationship between two international obsessions, football and gaming, has been explored in an exhibition as the line between simulation and reality becomes increasingly blurred.

Participatory and provocative, Pitch to Pixel features a range of artworks and unique objects alongside interactive gaming experiences and a range of playable classic arcade games.

Hit It! Interactive artwork at Pitch To Pixel: The World of Football Gaming
Picture © Jason Lock

A new interactive artwork, ‘Hit-it’ by Leo Schatzl, will allow visitors to put themselves ‘inside the game’.  A ‘header selfie’ will be triggered when a ball is headed, creating a short film of facial expressions taken at a crucial, unguarded moment.

There is also a photo booth where visitors will have the chance to put themselves on the cover of FIFA 16 or Football Manager, replacing the famously faceless figure that usually appears on the title’s packaging.

Curator John O’Shea commented “In its four decade history the computer games industry has successfully imitated, replicated and simulated much of what makes football such a fascinating game to play and to watch. Football and gaming now overlaps to such a degree that it’s sometimes difficult to see where one ends and the other begins. 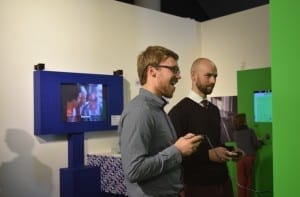 Gamers play FIFA International Soccer on the Sega Mega Drive at Pitch To Pixel: The World of Football Gaming.

National Football Museum Director Dr Kevin Moore said: “A major exhibition, focusing on football and computer gaming has never been done before. We’re delighted that, thanks to our funder and partners, we are able to realise our ambition of bringing football, digital culture and participation in the arts together.

Alison Clark, Director North, Arts Council England said: '‘The Arts Council is delighted to support this exciting show that brings together footballing, gaming and art. Each is an important aspect of contemporary culture – no more so than here in Manchester – and the creative interplay between them will form a fantastic cultural experience for a very wide audience."

James Salmon, UK Product Marketing Manager for EA SPORTS FIFA commented: “We’re incredibly excited to be part of this exhibition at the home of football memorabilia. It’s great that the history of football games is being recognised as we see the lines between the console and pitch becoming increasingly blurred.

Miles Jacobson, Studio Director at Sports Interactive, manufacturers of Football Manager said: "When Ov and Paul Collyer made our first game in their bedrooms, they weren’t even thinking of it being seen by anyone but their friends. Now, 22 years later, Football Manager is not only played by millions of people round the world, but it's also used by real life football clubs and media as a scouting and research tool, transcending its humble roots to being an integral part of football.

“We’re delighted that the National Football Museum has recognised the influence that football video games have had on wider football culture and are incredibly proud to be part of this new exhibition."

Entrance to the museum and the exhibition is free. Pitch to Pixel: The World of Football Gaming is open daily until the 5 June 2016.