Rooney’s A Work Of Art 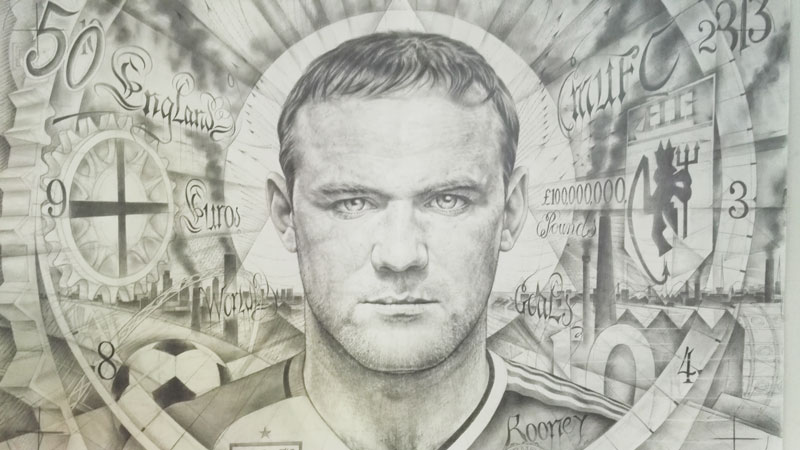 Acclaimed artist Michael Browne has been working on a new Wayne Rooney portrait from a makeshift studio at the National Football Museum.

The artwork, which depicts the Manchester United and England skipper at the centre of a £50 note, includes a nod to Manchester’s industrial heritage in the background. 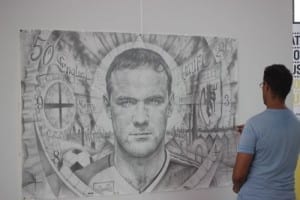 Browne, who created a Manchester United team on canvas at the National Football Museum in 2013, began work on his latest piece in Italy after Rooney scored his 50th goal for England last September.

When he returned to Manchester, Michael set up studio in the National Football Museum again, speaking to the public while putting the final touches to his pencil masterpiece.

While the £50 note motif was the starting point for the work, other elements including a clockface represent not just Rooney's achievements but his changing role on the pitch ahead of an important season under Jose Mourinho.

Michael Browne, speaking to MUTV at the Museum, said: “Rooney is quite elusive to the public and I just think he is an interesting character because he polarises opinion in the way Eric [Cantona] did – people have very strong views on him.”

Dr. Kevin Moore, Director at the National Football Museum, said: “It’s been great having Michael back at the Museum creating his latest piece of art, and it’s particularly fitting Wayne Rooney is the subject given he’s celebrating his testimonial against Everton at Old Trafford this week.

“Wayne has proved himself to be one of the sport’s most enduring talents, and Michael’s artwork is shaping up to be a unique reflection of his achievements for both club and country.”

The artist's most famous work The Art Of The Game, which depicts Eric Cantona as a Christ-like figure surrounded by young United players as Roman soldiers, is now owned by the Frenchman and is on display at the National Football Museum. Browne's as-yet-untitled Rooney work will be on display throughout the summer holidays.