Raring to go for Russia? World Cup activities at the National Football Museum 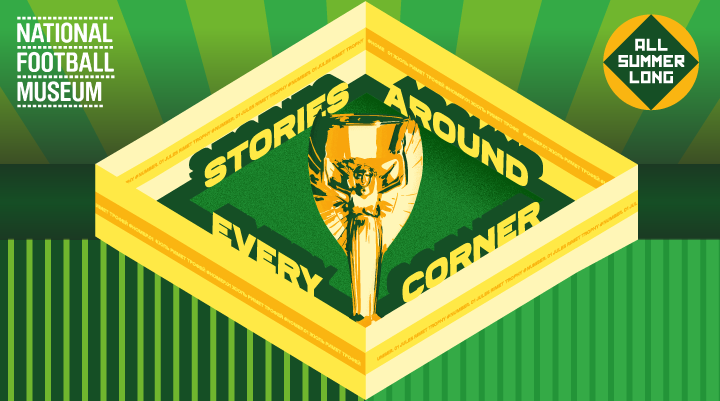 Get closer to the World Cup’s greatest moments this summer at the National Football Museum with a host of exhibitions, displays and activities.

The museum’s newest display opens on 13 June, exploring the history of football in the host nation. Red Stars features several Soviet-era shirts, objects and posters from the 1950s, including a Lev Yashin-esque goalkeeper save which also features on this year’s official FIFA World Cup poster.

To complement this, a fantastic new display tells the story of World Cups past, with an eye towards Russia’s present.  A majestic seven-metre tapestry as seen on BBC as part of their own campaign, will take pride of place in the museum from Tuesday 12 June.

A different strand of World Cup history is unravelled with the Fabric of Football display now on show.  The museum has teamed up with Classic Football Shirts to showcase some of the iconic match-worn shirts from previous competitions. The rotating exhibition features head-turners such as Terry Butcher’s iconic Italia ’90 kit, and the bold yellow jersey of Brazil’s Roberto Carlos, worn by the left-back en route to the France ’98 final.

The museum’s iconic displays of medals, shirts and memorabilia form the basis of dedicated World Cup tours, available daily for the duration of the competition.

Younger visitors can follow the World Cup across the globe via the galleries with the Pickles the Dog museum trail, and take home their very own flags and posters from free arts and crafts workshops.

Passionate collectors can complete their albums at Panini World Cup sticker swaps, running every weekend, while 5 to 11-year-olds are encouraged to emulate their international heroes during thirty-minute Football Skills sessions, designed to get kids match fit and raring to go for a summer of football fun!

See our What's On page for the full fixture list.