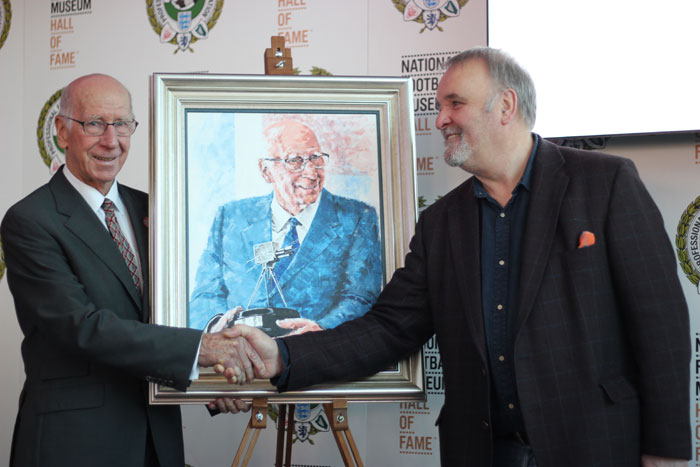 A new, authorised portrait of football legend and National Football Museum president Sir Bobby Charlton has been unveiled by the 1966 World Cup winner at the museum in Manchester.

Painted by portrait artist Stuart Parker, the acrylic on canvas portrait was started in the summer of 2016 following two private sittings with the England and Manchester United hero.

Sir Bobby Charlton with the painting

Sir Bobby is pictured holding his BBC Sports Personality of the Year Lifetime Achievement trophy, which he was awarded in 2008. The trophy was personally selected by Sir Bobby as a favourite memento from his career.

The portrait will now be on public display at the National Football Museum from early December for three months.

A limited edition of 850 prints of the portrait is now for sale exclusively from Sir Bobby’s charity Find A Better Way (www.findabetterway.org.uk/portrait).

Reacting to seeing the portrait for the first time Sir Bobby said, “"I am delighted that Stuart has painted such a wonderful portrait to raise money for Find A Better Way and I was honoured to sit for it. I would like to thank the National Football Museum for agreeing to display it and I hope the public will like it as much as I do."

Each 18in x 13.5in (45cm x 34cm) print will be numbered, printed on high quality 285gsm rag paper, signed in pencil by both the artist and Sir Bobby, couriered in a secure tube, and will come with a certificate of authenticity from the Fine Art Trade Guild. 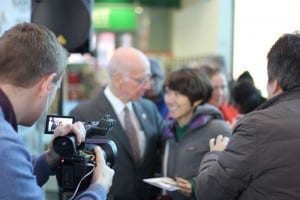 The total cost for each print is £239. Shipping is being provided free of cost by global logistics firm DHL to support Find A Better Way, so there is no extra charge for overseas orders.

All profits from the sale of these prints will go directly to Find A Better Way.

Speaking of the choice of memento by Sir Bobby, artist Stuart Parker said, “I always ask everyone I paint to bring a favourite object with them to the sitting. When people have something of sentimental importance in their hands they keep an interested expression on their face.”

“I was really stunned when Sir Bobby walked in with his BBC Sports Personality trophy - it’s such an iconic object. He asked me, ‘Will this do?’ I said, ‘Yes, that will definitely do!”