Stars Turn Out For Hall Of Fame 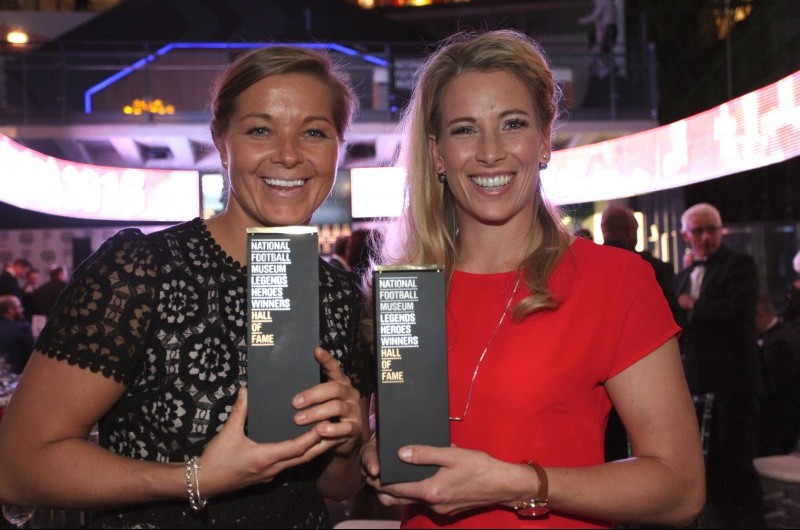 The National Football Museum Hall Of Fame 2016 ceremony took place in Manchester this week, with 12 new names added to the illustrious list of members. 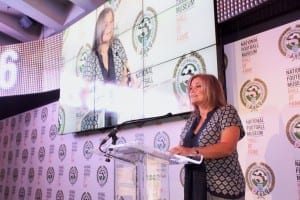 Gordon Strachan, an FA Cup winner with Manchester United in 1985, enjoyed further success as captain of the Leeds United side who won the final First Division title in 1992. Receiving his award from two old friends and team-mates at Dundee, George Mackie and Alex Caldwell, Strachan spoke about how lucky he was to spend his career in football: "Since I was 15 years old I've been paid to be a schoolboy...the people I've played with over the years have been phenomenal; I don't think of it (my career) in terms of winning things, it's the laughter and the joking over the last 45 years." 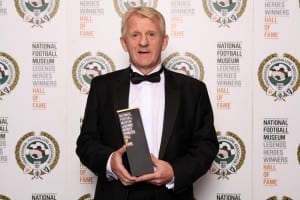 Former England goalkeeper Rachel Brown-Finnis received her award from her first ever coach Mick Payne who described her as "the best women's goalkeeper I've ever seen." Brown-Finnis, who spent part of her early career in the USA spoke of her pride at the developments in the women's game, and of being "part of the transition from fully amateur to fully professional".

Liverpool legend Ian Callaghan presented an award to the family of the great Billy Liddell, in an emotional presentation. Callaghan spoke with admiration about his first visit to watch Liverpool, and watching Liddell, "The enthusiasm when Billy Liddell got the ball was unbelievable. Billy was strong, he was quick, he was some player. 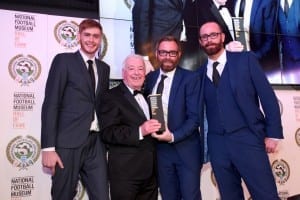 "I had the opportunity to sign for Everton or Liverpool, but I went to Liverpool because of Billy Liddell... He was just an incredible man; it’s a great honour for me to present this award.”

Liddell's grandsons Tim, Andrew and Stephen Liddell accepted the award, saying “The years we got to spend with him were priceless; he was a true gentleman of the game, a Liverpool legend deeply missed but never forgotten.”

John Robertson, whose Nottingham Forest career included one match-winning goal and one match-winning assist in two European Cup finals, received his award from Forest team-mate John O'Hare and Chief Executive of The PFA Gordon Taylor OBE. O'Hare praised the ability to "beat people like they weren't there" and Taylor hailed "a supremely great player." 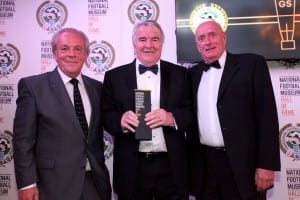 Robertson himself saved his praise for his former manager Brian Clough; "I've been a lucky boy; I played with some great great players...under a manager who was head and shoulders above anyone who's ever managed the game."

The FA's Football For All Award was collected by Martin Sinclair, whose inspiring story to come back from almost 4 years in a wheelchair to captain the England CP side earned a standing ovation from the audience. Sinclair summed it up as proof that "Dreams do come true.", while Lyndon Lynch praised "his technical ability; he reads the game so well, and a tremendous leader on the pitch.

"Martin is the perfect role model, he's a gentleman." 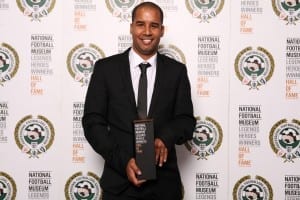 Manchester United great Denis Irwin, who won 19 major trophies, received his award from his former Oldham Athletic manager Joe Royle, who he praised for reigniting his career after being released by Leeds.

“The four years I had at Oldham taught me an awful lot. Joe built my confidence up again… we had a very attacking side so when I went to Manchester United I felt right at home there straight away.

“Sir Alex was great; there were no grey areas – you got your head down and worked hard which suited me, but a lot goes down to what Joe did for me at Oldham.

Rachel Unitt received her award from The FA Head Of Participation Peter Ackerley who hailed Unitt as a "pioneer" and an inspiration to potential future Hall Of Fame members. Unitt herself talked about great memories of playing for England, including playing in front of a hometown crowd for England at Wallsall's Bescot stadium and scoring "a diving header, although I went down in stages..." when captaining England on her 100th cap. 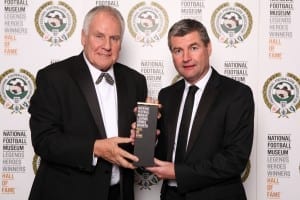 Arsenal and England great David Seaman received his award from John Lukic, who praised "behind the affable exterior that you see, a very motivated, very strong-willed character."

Seaman himself praised former Arsenal manager George Graham and the side that won the title in Seaman's first season as a Gunner, and also the Arsene Wenger "revolution…when he came he changed everything, the way we trained, the way we played, our eating habits…He was brilliant.

Asked about the most memorable moments of a long career, he said “The one I remember most is the Gary McAllister penalty save, because the ball did start to move. 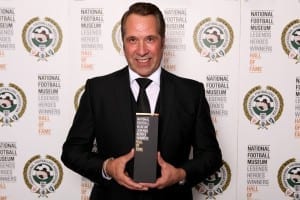 It was an important stage of the competition for us: we were 1-0 up and struggling a little bit. I managed to get a good elbow on it and 2 minutes later Gazza goes and scores that fantastic goal and steals all my glory."

In the final presentation of the evening, Phil Thompson presented the award to Mark Lawrenson. The Liverpool centre half was part of the panel that originally set up the Hall Of Fame in 2002, and joked “I’ve been voting for myself for 12 years – I thought I’d have got there in 2."

Thompson praised the man who was to take his place at Liverpool, saying "on the football side, this guy was a genius...no wonder he took my place. 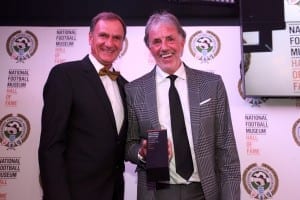 Lawrenson was asked about the highlights of a trophy-laden career, and remembered the importance of his very first appearance: "I had great times at Liverpool, and at Brighton, but the best times were at Preston…I was born in Sharoe Green hospital about 400 yards from Deepdale, my dad played for Preston and I was still at school taking my A-Levels when I made my debut; that was a massive moment."

There were also an induction for Neville Southall, whose award was accepted on his behalf by Andy Burnham MP, who said “In the mid 1980s he was the best goalkeeper in the world…If he was in the team it just gave you confidence." 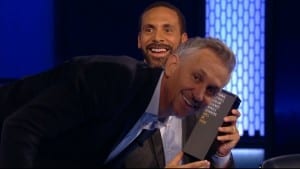 England and Manchester United centre half Rio Ferdinand was also inducted, and sent a video message from the BT Sport studio, thanking the museum for the honour of being included in the Hall Of Fame.

A special award was presented to Cambridge University Association Football Club, who the National Football Museum recognise as the oldest football club in the world, founded in 1846, with a book of laws dating from 1856, which became the  main reference for the first Football Association rules in 1863.

Read more about the Hall Of Fame here.