Ten new stars added to the Hall of Fame in 2017 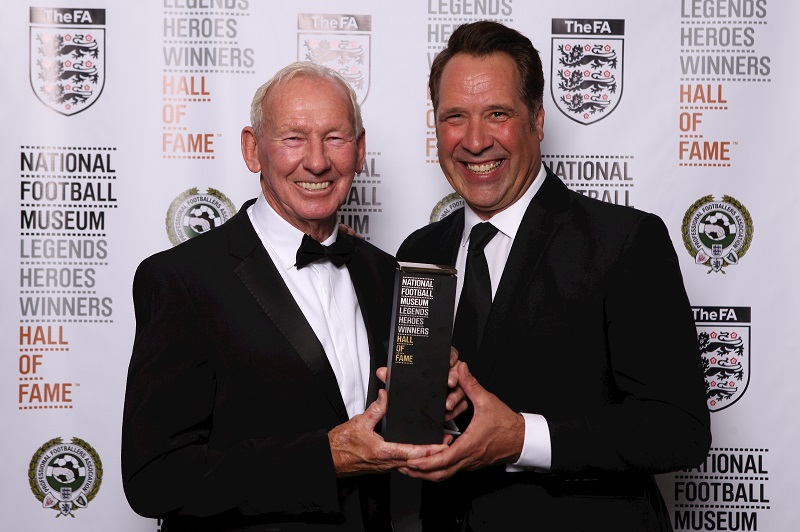 Host Manish Bhasin presided over the ceremony, supported by the Professional Footballers' Association, as the likes of Steven Gerrard, Bob Wilson, Kelly Smith and Rachel Yankey accepted their places in the museum's Hall of Fame. 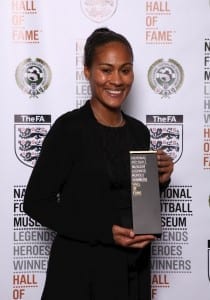 England and Arsenal Women winger Rachel Yankey was first to collect her award, in recognition of a fantastic career for both club and country. Rachel played a significant part in the Gunners' domination of women's football, winning eight of her nine titles with the North London side, and was an equally important presence within the England setup, becoming the first player to surpass Peter Shilton's 125-cap record.

"It's brilliant. I feel honoured just to be here amongst the legends of the game," said Yankey. "I'd never been to the museum before, so it's a very special occasion."

Marieanne Spacey presented Rachel with her award, and paid tribute to her former  teammate's commitment to the game. "Rachel's achievements come from her dedication. That doesn't happen overnight." 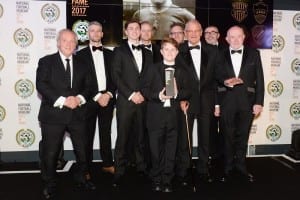 Manchester United half-back Charlie Roberts captained the club to their first ever major honours, lifting the First Division title in 1908 and the FA Cup the following year. Perhaps even more significantly, Roberts co-founded the Players' Union, the forerunner to the evening's sponsors, the Professional Footballers' Association.

"In 1907, one of his players, Tommy Blackstock, died on the pitch. There was nothing available for Blackstock's family, and my grandfather was horrified that nothing was available, so they decided to do something about it," said Ted Roberts, grandson of the long-serving United skipper, who accepted the award alongside a number of Roberts' relatives. 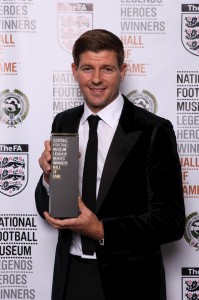 Liverpool legend Steven Gerrard was present to take his place in the Hall of Fame. The Kop hero inspired his boyhood club to a number of memorable victories - not least the Champions League triumph in 2005 - and led by example throughout his remarkable career with the Reds and the national side.

"It's a really proud moment," said the ex-Liverpool captain. "I'm honoured to receive this award. I was looking at the list of names on the wall before, and I'm very flattered to be joining a very elite group of people."

Gerrard cited the 'miracle of Istanbul' as the highlight of his career. "To live and grow up with all that pressure from the age of 19 to put trophies in the cabinet, to get the big one over my head was a huge weight off my shoulders and a very proud night for myself and my family." 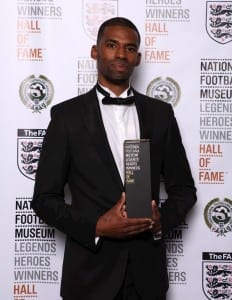 Alistair Patrick-Heselton received the FA's Football For All award, joining former teammate Matt Dimbylow in the Hall of Fame. Patrick-Heselton was a former QPR prospect plying his trade in semi-professional football when a life-changing car accident seemingly ended any hope of a career in the game. However, the attacker returned with Team GB's CP team, winning a silver medal at the Paralympic World Cup and representing his country at the 2012 Paralympic Games in London.

"Jubilation. I'm over the moon. It's a dream come true," said Liverpool fan Alistair, who was thrilled to be inducted alongside Gerrard on the night. The ex-Team GB forward was told he might never walk again, let alone kick a football, but was emboldened by the prospect of returning to the game. "I soon realised it wasn't about being the old me, but building the new me. And CP football, that opportunity came and made me realise more about myself and what could be done." 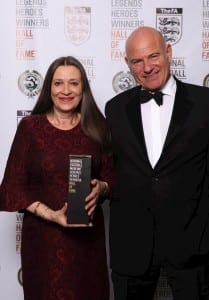 The contribution of football journalists was recognised for the first time, with Observer and The Times reporter Hugh McIlvanney becoming the first of his kind to be inducted, in partnership with the Football Writers' Association.

Hugh's wife Caroline accepted the award on his behalf, while FWA chairman Paddy Barclay paid tribute to his friend and colleague. "There's Elvis Presley in the field of music; in politics, John F. Kennedy; in sports, Pelé and Muhammad Ali. Football management's contribution was Sir Matt Busby. And it was Sir Matt's great friend, Hugh McIlvanney, who was journalism's contribution. That was the level that he reached."

West Ham United stalwart Billy Bonds, a leader from the front for over twenty years, joins the likes of Bobby Moore and Sir Trevor Brooking in the Hall of Fame. 'Bonzo', adored by Hammers fans for his unerring commitment and never-say-die attitude, skippered the side to two FA Cup triumphs in 1975 and 1980.

The award was accepted on his behalf by Mike Summerbee, who described Billy as the heart of the football team. "He was a great admirer of the late, great Bobby Moore. For him to think that he's in the Hall of Fame with Bobby is something very special to him."

Chelsea and England goal machine Frank Lampard collected his award at a PFA event earlier in the day. Having initially followed in his father's footsteps at West Ham, Frank truly made himself a household name at Stamford Bridge, becoming the club's all-time top scorer. Those goals contributed to Chelsea's wave of success from the mid-noughties onwards, collecting three titles, four FA Cups and the UEFA Champions League. 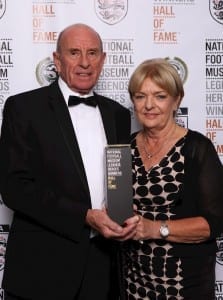 Speaking via video message, the England midfielder spoke of his pride at being inducted into the Hall of Fame. "Thanks to the National Football Museum for putting me amongst so many great names. I never imagined as I set out as a young player that I would be able to get into the sort of company that I'm in now."

Frank thanked every person who had helped him throughout his career, from his youth coaches to his family. "The support around me played a huge part in allowing me to go on and have the career that I've had," said Frank, who also paid tribute to his teammates - "without them, I would be nowhere near the player I am."

Midfield mainstay Gary Speed, a much-loved figure at all five of his professional clubs, was also inducted on the evening. Starting out at Leeds United, 'Speedo' quickly established himself as a versatile but remarkably consistent asset to every one of his sides, respected and admired by fans and teammates alike. He became the first player to make 500 appearances in the Premier League, and laid the groundwork for much of Wales' recent international success.

Speed's parents, Roger and Carol, received a standing ovation as they accepted his award on Thursday evening. "Obviously, we're both very proud," said Carol. "What we didn't realise until after he'd gone was the respect, the love and the accolades that people gave him."

"He was a complete player; the complete pro," added Joe Royle, Speed's former manager at Everton. "He was very popular and loved by all of the other players as well. He scored a number of terrific goals, and despite not being one of the biggest players, he had a tremendous leap. As a manager, he was going to go on and be a Premier League manager, no doubt about it."

England Women's all-time top scorer Kelly Smith was honoured on the night. The Arsenal hotshot was widely regarded as one of the greatest players in world football throughout her career in North London and the States, a view which still persists today. Her goals helped the Gunners lifted a number of league and cup trophies, while her 46 goals in an England shirt is only bettered by Messrs Rooney, Charlton and Lineker.

Accepting her award, Smith said: "It's a magnificent achievement for myself and my family. I never thought since playing at the age of six in a boys' team that I'd be able to reach the levels that I have. I've just tried to play the game as much as I could with passion, heart and desire, and I've loved every minute of it." 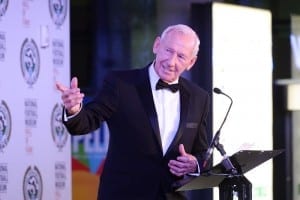 The final Hall of Fame inductee to take to the stage was Arsenal stopper Bob Wilson, a Double-winner with Arsenal in 1971. Bob dedicated almost four decades of his life to the North London club as a player and a coach, and his award was fittingly presented to him by former Highbury pupil, and good friend, David Seaman.

"I stand here humbled, very grateful, but accepting this accolade is very special for me by the city in which I receive it," said Bob. "It is the great city of Manchester which created the dream, spark and belief that a young goalie of Scottish parentage could one day make a mark on the greatest of sports," paying homage to fellow Hall of Fame inductee Bert Trautmann and Manchester United coach Bert Whalley.

Find out more about the Hall of Fame, the selection process and the inductees by clicking here, and see video presentations and interviews from throughout the evening on our Facebook page.