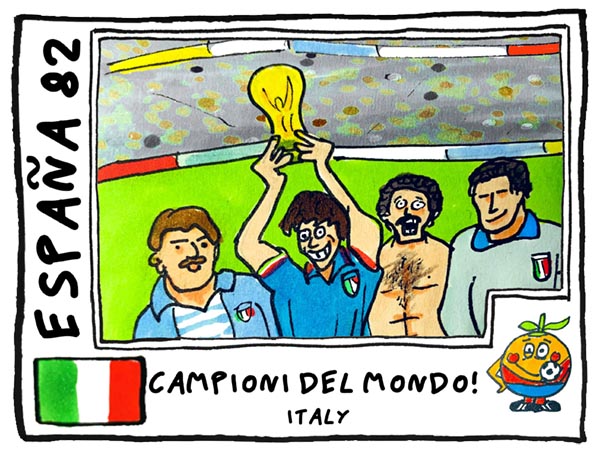 The Italians hadn’t got their hands on the World Cup in 44 years – and they couldn’t have looked further away from doing so again in the group stage. A squad embroiled in match-fixing and corruption struggled in Group 1. Three games, three draws and just two goals were somehow enough to see the Azzurri progress.

If they couldn’t beat Poland, Peru or Cameroon, the tifosi feared for their fate against defending champions Argentina and a swashbuckling Brazil side. Enzo Bearzot’s men defied the odds (and their own press) to stun them both, then defeated West Germany 3-1 in the final.

A side incapable of winning any of their opening group games would battle their way past three of the tournament’s top teams: a football renaissance quite like no other. 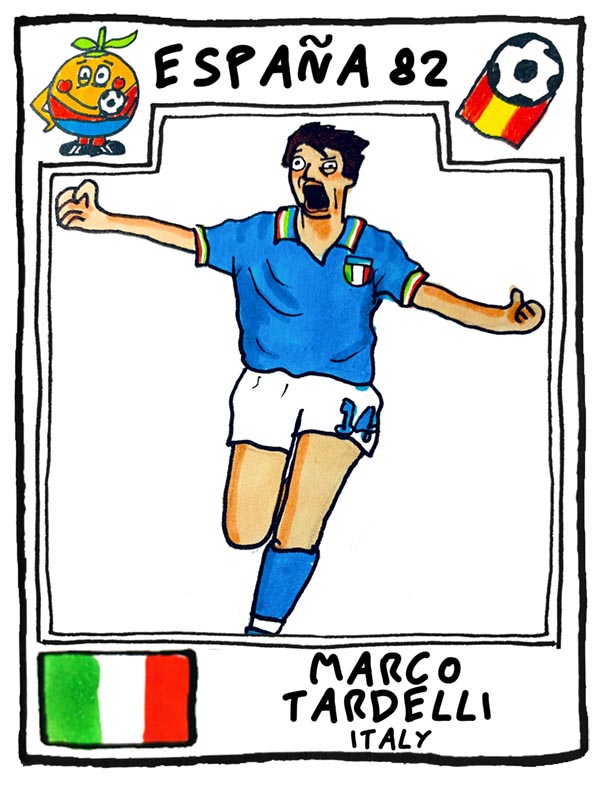 When Marco Tardelli raced away from goal – fists clenched, arms pumping, tears flowing – he inadvertently ushered in the age of the goal celebration. Today, his reaction to the goal is more famous that the strike itself, a fine effort on the slide from the edge of the area that gave Harald Schumacher no chance in the West Germany net.

That goal was Italy’s second of the game, giving the Italians valuable breathing space with just over twenty minutes left to play. Tardelli himself likened the moment to a near-death experience, saying that his whole life flashed before his eyes.

The Tardelli cry was arguably the game’s first internationally renowned goal celebration, paving the way for such World Cup classics as the Bebeto baby, the Robbie Keane bow and arrow and the Roger Milla dance. 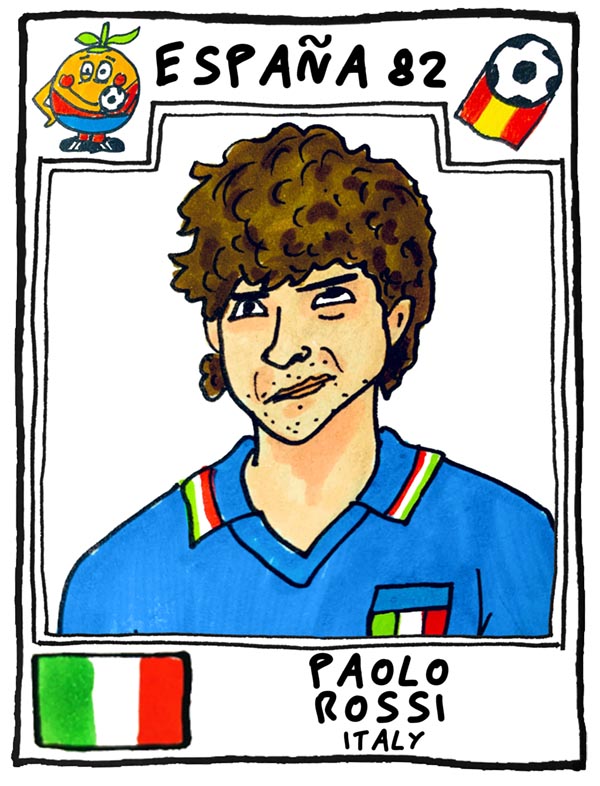 The Juventus striker’s footballing glow up throughout the 1982 tournament was something to behold. He lumbered into Espana ’82 off the back of a one-year match-fixing ban, conveniently reduced from two years just in time to represent the Azzurri on the world stage.

Having played just three games for Juve before the close of the Serie A season, Rossi was a touch out of shape heading into the summer. He was described as a wandering ghost during the first group stage, but Enzo Beartot resisted calls to exorcise him from the starting eleven.

Rossi repaid that faith with a match-winning hat-trick against Brazil, a match-winning brace against Poland the semis, and a World Cup-clinching goal in the final. The unfit, unloved pariah returned to Italy a hero, Golden Ball in one hand and Golden Boot in the other. 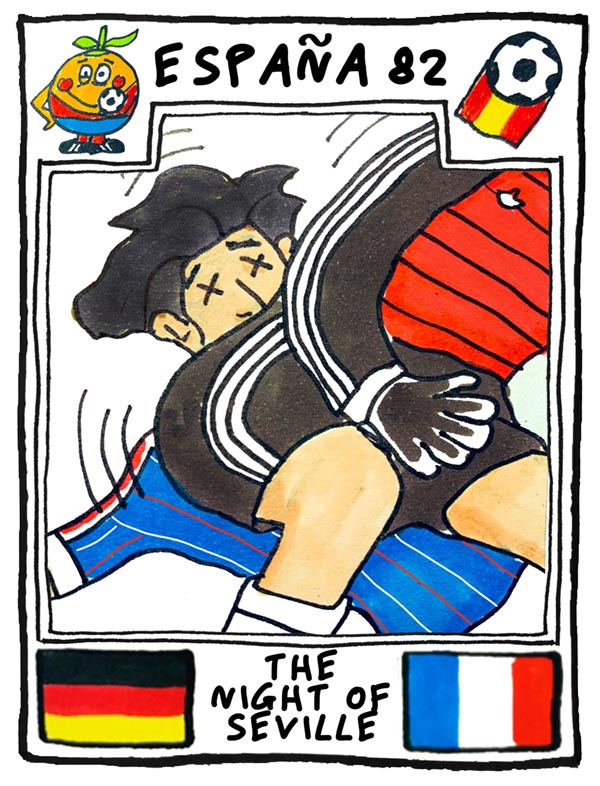 Note to all players out there: tackling someone with your hip is rarely a good idea.

To call Harald Schumacher’s brazen assault on Patrick Battiston an attempted tackle is a crime in itself. The France full-back, on as a sub, raced onto a long ball forward and looked destined to put France ahead. Schumacher’s response was to hurl himself at full speed into Battiston. The latter’s shot bobbled wide of goal, but Schumacher’s attempt well and truly hit the target.

Battiston was rendered unconscious by the blow, while a nonchalant Schumacher – not even sent off, let alone arrested – waited with chilling patience to restart play, as referee Charles Corver did not consider coma-inducing violence worthy of a penalty kick. Battiston left the field just ten minutes after his introduction – albeit without two of his teeth, three shattered ribs and damaged vertebrae.

The game ended 3-3, and tournament villain Schumacher was West Germany’s hero, saving Maxime Bossis’ sudden death penalty. His despicable foul and dismissive post-match attitude saw him more hated than Hitler, according to one French newspaper poll (opinion may have abated since then). 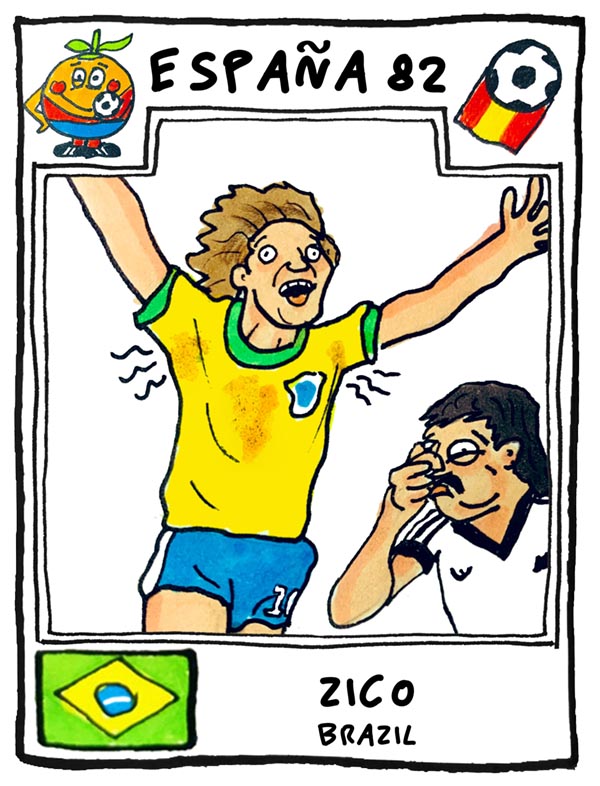 You wouldn’t guess this from the image above, but just seconds before, Zico had scored one of the goals of the tournament: a flying overhead kick in the box against New Zealand. Instead of capturing the Flamengo maestro mid-motion, our friends at No Score Draws instead opted to highlight his distinct sweatiness: all the more remarkable, considering this was barely half an hour into the game.

The silky (quite possibly stinky) midfielder was potent throughout Espana ’82, scoring four goals and having a significant hand in many more. He was the jewel in a Brazil side that looked destined to go all the way, only to be prematurely stopped in their tracks by Italy in the second group stage.

Zico would later claim that the game would leave a scar on football, signalling an end to Brazil’s free-flowing era. 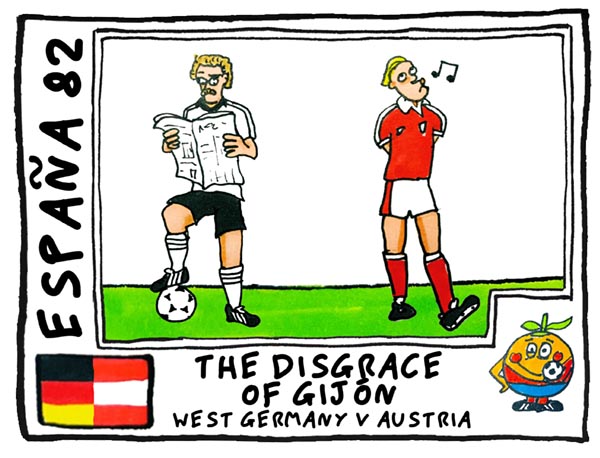 The Disgrace of Gijon

The most disgraceful game in World Cup history? Ja, in der tat.

Back in 1982, the final group games did not take place at the same time: in fact, some didn’t even take place on the same day. Algeria’s defeat of Chile meant West Germany knew they needed a win to go through, and Austria knew they needed to restrict their opponents to two goals in order to edge out Algeria on goal difference.

The Germans took the lead after ten minutes, after which the near neighbours were a little too friendly with one another. Both sides generously allowed one another to play keep ball for long periods. Neither side offended the other with serious shots on target. Such was the camaraderie between the two teams, they dared not put in so much as a gentle nudge or polite interception.

Ultimately, both sides went through but were barracked by their own fans and the watching world.

The two teams had played out the frenetic, hot-blooded Miracle of Cordoba at the previous World Cup. Four years on, they had subjected the game to the Disgrace of Dijon, forcing FIFA to change kick-off timing rules from Mexico ’86 onwards. For shame.