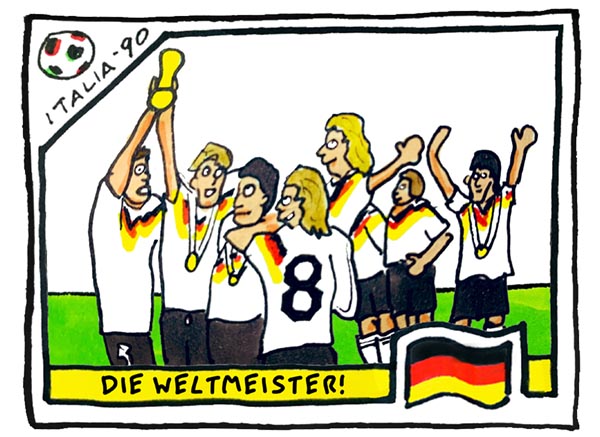 Defeated finalists in 1982 and1986, West Germany were favourites to lift the coveted trophy in Italy.

A rock-solid defence, industrious midfield and clinical attack meant that the Germans were arguably in even better shape than in Spain or Mexico. So it proved, as they comfortably progressed from Group D, exacted revenge for their EURO 88 defeat at the hands of the Netherlands, then edged past Czechoslovakia via a penalty and England in a shootout to reach their third consecutive final.

The final itself is considered to be one of the tournament’s worst ever, blighted by cynical fouls and generally poor football. The game bore witness to the first red card in World Cup final history – and then another three minutes before full-time.

Fittingly, the game was decided not by a moment of magic, but from twelve yards. Andreas Brehme dispatching a late spot kick. F0r a t0urnament full of romanticised moments and flashpoints, it was, in actuality, all a little bit dull. 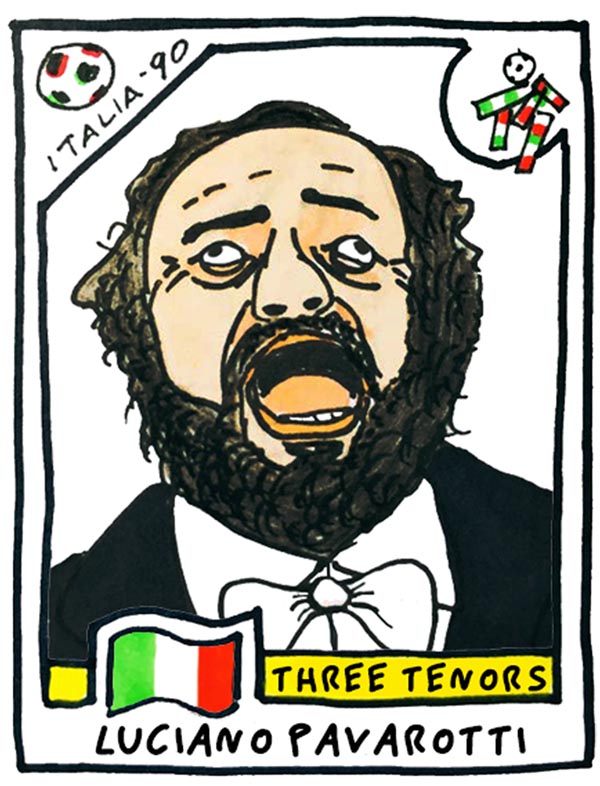 Would Italia ’90 be remembered the way it is today without the portly tenor?

When Pavarotti’s 1972 recording of Puccini’s Nessun Dorma was selected as the theme song for the BBC’s coverage of Italia ’90, it catapulted the tenor to global superstardom almost overnight. Pavarotti joined forces with Jose Carreras and Piacido Domingo to perform the aria on the eve of the final: a performance that was far more beautiful and impactful than the football that followed.

“Vincerò! VINCEEEEEERROOOOOOOOOO!” translates to “I will win!” The Italians didn’t win, of course: they’d been knocked out by Argentina in the semis. Still, Pavarotti’s performance provided the perfect soundtrack to endless tournament highlight reels, documentaries and rose-tinted retrospectives. 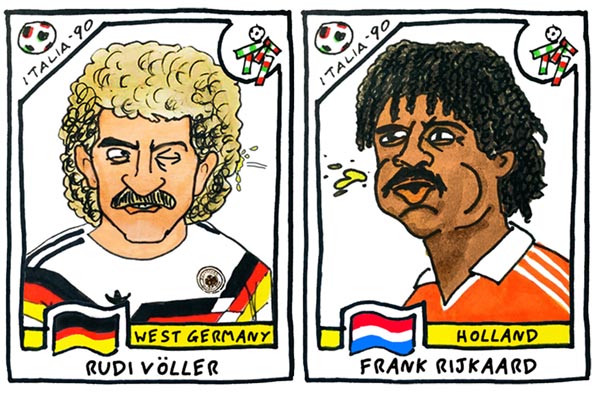 One of the most visceral images in the No Score Draws’ art gallery.

Encounters between West Germany and the Netherlands were always hot-blooded, emotional affairs, owing to the geopolitical history between the two countries. That tense rivalry boiled over in their second round encounter.

Dutch defender Frank Rijkaard, having snapped attacking counterpart Rudi Voller, spat into the German’s big blonde afro. When Voller went down in the box from the resulting free kick, Rijkaard was there again to twist his ear and stamp on his foot. The only fair response to these repeated assaults was to dismiss both Rijkaard and Voller, who then copped another mouthful of phlegm on his way off the pitch.

The Dutchman would later apologise to Voller, and the two would make light of the incident in a television advert (selling butter, not shampoo). 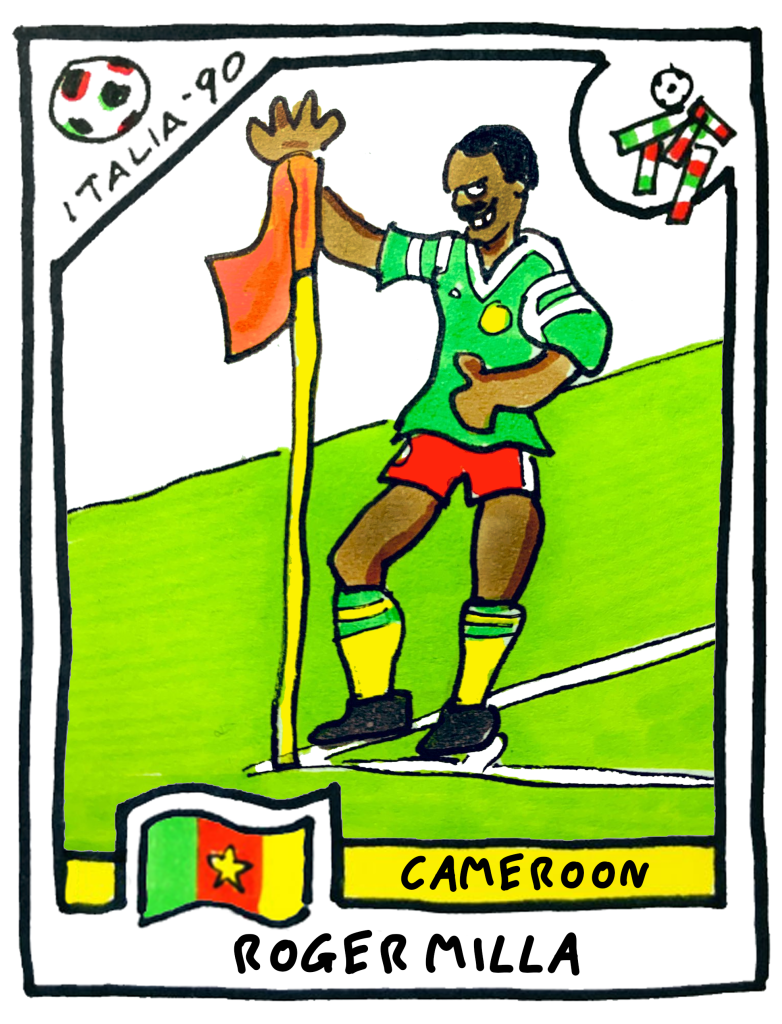 You can keep your Milly Rock and whatever you call that Daniel Sturridge arm thing – Cameroon’s Roger Milla is the dance OG.

The veteran striker had turned 38 a month before the tournament kicked off, but showed he could still bust a move with the kids in Italy. In the twilight of his career, the Saint-Pierroise forward was used as a super-sub, hot-stepping off the bench to score a decisive brace against Romania in the group stage.

Milla was summoned once again in the second round, putting Colombia to the sword with two extra-time goals. In doing so, he became the World Cup’s oldest goalscorer (a record he broke again in 1994). You wouldn’t have known it from his celebration: a sumptuous rhumba around the corner flag that delighted the watching world. 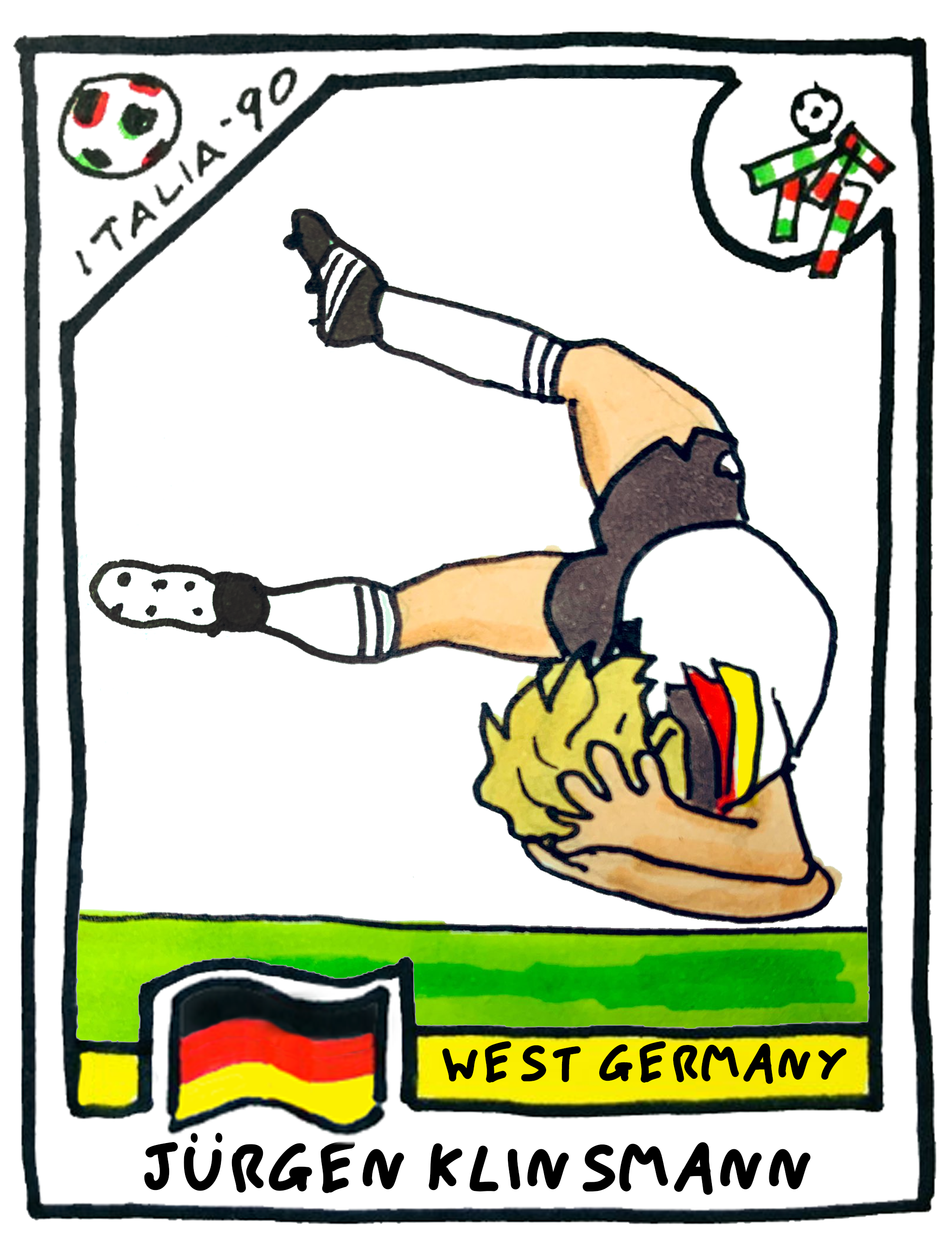 There he is, in full motion. Jurgen Klinsmann spent approximately 35% of Italia ’90 flying through the air in this exaggerated fashion.

Of course, that’s not actually true. But one flight in particular would see Klinsmann prescribed a label that proved hard to shake off. Just over an hour into one of the scrappiest, fraught World Cup finals in modern memory, the striker was chopped down by an admittedly poor foul from Argentina’s Pedro Monzon. Klinsmann almost managed to perform the full YMCA on his way to ground, before rolling around on the floor like a man on fire.

The amateur theatrics worked, Monzon received his marching orders, and West Germany went on to lift the trophy. For his part, Klinsmann insisted that the foul had left a 15cm gash on his leg, but still that tag remained.

When he joined Spurs four years later, he was still referred to as the ‘Dive Bomber’. He embraced the moniker on scoring his first goal for the club, instantly endearing himself to fans and rivals alike. 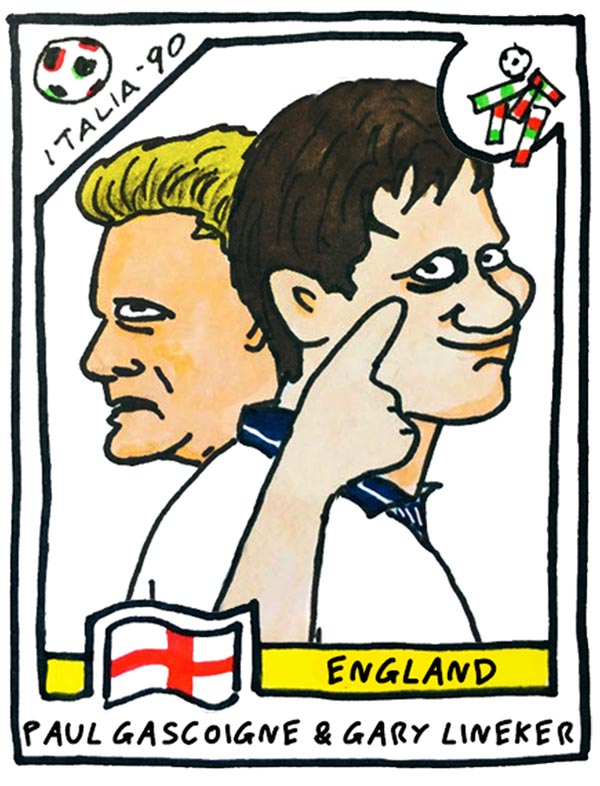 We’ll come right out and say it: Italia ’90 was all about Gazza (and a bit about Pavarotti).

That last swelling crescendo always brings to mind the Geordie’s pink face, struggling and ultimately failing to contain his tears as his World Cup final dreams are shattered in real time. The bright spark in an otherwise average England side, Gazza’s infectious character and boundless energy had driven Bobby Robson’s side into the semi-final.

Unfortunately, he had a little too much energy when overreaching in extra time, ostensibly catching Thomas Berthold with a late challenge. Out came the yellow card: having been booked in the Belgium game, Gazza would be suspended for the final should England make it through.

The tears flowed during the game and after the shootout defeat (in which the emotionally compromised midfielder Gazza had somehow scored). When he cried, the nation cried with him…

…for a bit. Then Spitting Image hilariously lampooned those tears. You can see the puppet in our England on the World Stage display.