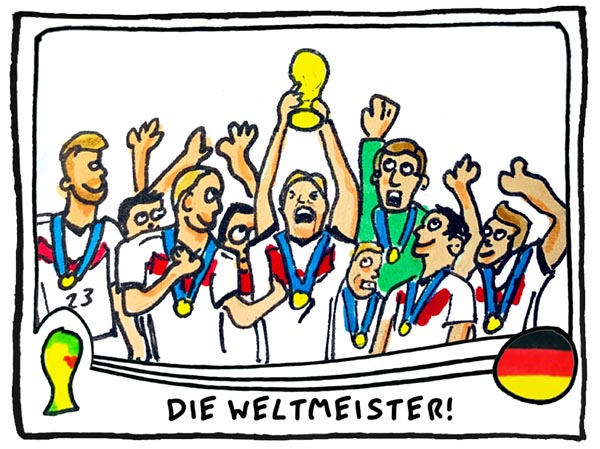 Their reputation as serial, clinical winners always precedes them, but did you know that, by 2014, Germany had not won the World Cup since its reunification?

We were surprised too. In fact, Euro ’96 was the last time the Germans had won a major tournament. Runners-up at Korea-Japan, knocked out in the semis at their home tournament, then suffering the same fate in South Africa. A similar pattern emerged at the Euros: runners-up, semi-finalists, semi-finalists. Often the brautjungfer, rarely the braut.

After so many near misses, long-serving coach Joachim Low finally made it. A 4-0 demolition of Portugal in their opening group game sent a message to the other 31 teams, but they went through the first two knockout rounds by the most slender of margins (though were more comfortable against France in the quarters than against Algeria in the previous round).

A noisy semi-final against hosts Brazil lay in store. Though they were without their star man, there was probably little Neymar could have done to prevent his team from shipping an astonishing seven goals; five of those coming in the first half-hour.

South American neighbours Argentina would not implode so dramatically in the final, but Germany, having dominated much of the ball throughout, would eventually see them off in extra time. In doing so, Low’s side became the first European side to win a World Cup in the Americas, and ended Die Mannschaft‘s 18-year wait for silverware. 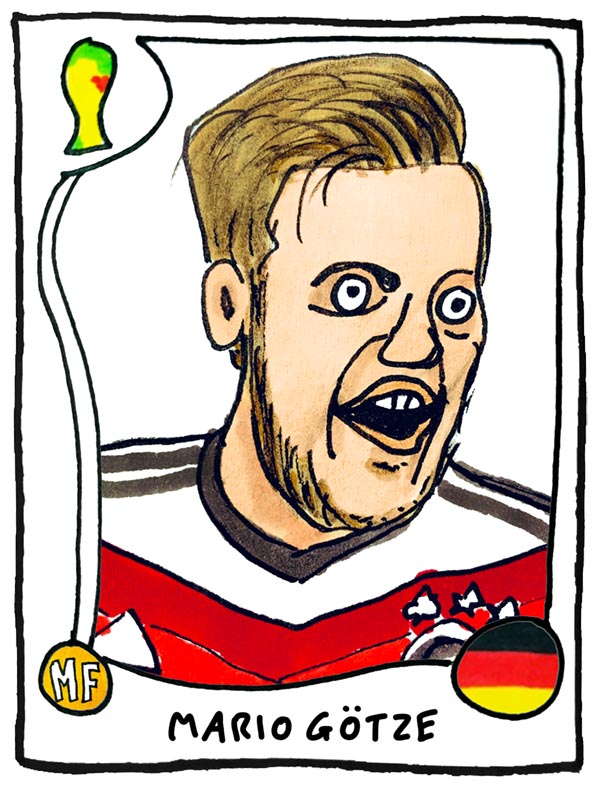 In the aftermath of Germany’s win, Mario Gotze was the darling of the national side – but he played just 75 minutes of football during the knockout stages, having started the first two group games. Withdrawn at half-time against Algeria in the round of 16, Gotze was used sparingly as a sub – and not at all during the goal glut against Brazil – due to the embarrassment of riches at Low’s disposal.

Having failed to break down the stubborn Argentines, Low rolled the dice, replacing all-time top scorer Miroslav Klose with Gotze, with the instruction: “show the world you’re better than Messi”. No pressure, then.

With the clock ticking down, fellow sub Andre Schurrle sent a cross into the area. Gotze controlled it effortlessly with his chest, then rifled in a volley from an acute angle. Cue the passionate celebration, immediate Messi comparisons (Low later admitted he regretted his choice of words) and the insufferable Super Mario headlines. HE’S NOT EVEN ITALIAN (or a plumber, for that matter). 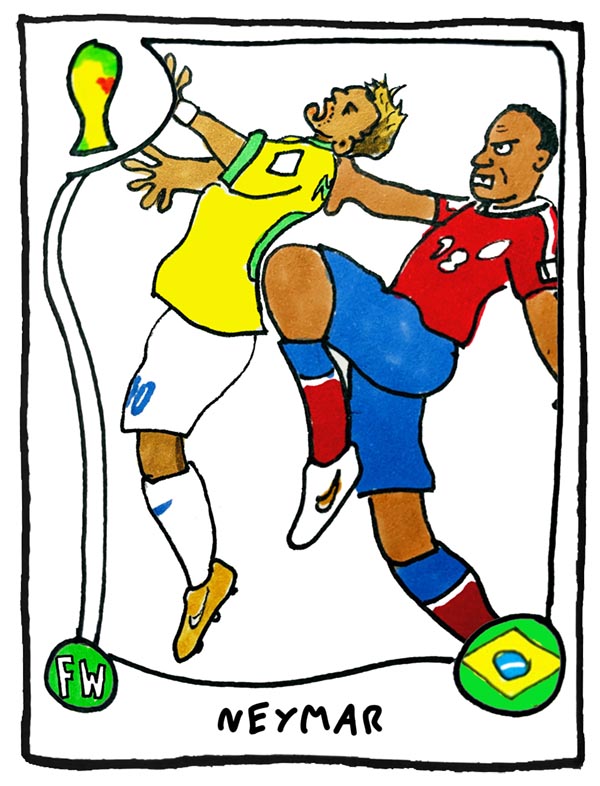 It could have been so different.

For all his diving, whining and showboating, Brazilian poster boy Neymar was considered to be one of the greatest players on the planet by the time the World Cup rolled into Rio. If anyone could restore the national side to their former glory, it was the Barcelona forward.

He looked likely to deliver on that promise early doors, bagging braces against Croatia and Cameroon to send Brazil through as Group A winners. Neymar converted a crucial spot kick in the shootout win over Chile, but was finally given a reason to go down when Colombia’s Juan Camilo Zuniga literally smashed through his back, breaking two of his vertebrae.

The reaction from the media, fans and teammates alike was a little, shall we say, melodramatic. Julio Cesar and David Luiz brought Neymar’s number 10 shirt onto the field with them to hold during the national anthem, bringing funereal vibes to what should have been an electrifying occasion,

Germany afforded the hosts eleven minutes of mourning before commencing their onslaught. By the full-time whistle, supporters in Belo Horizonte and the country over were sobbing for a rather different reason. 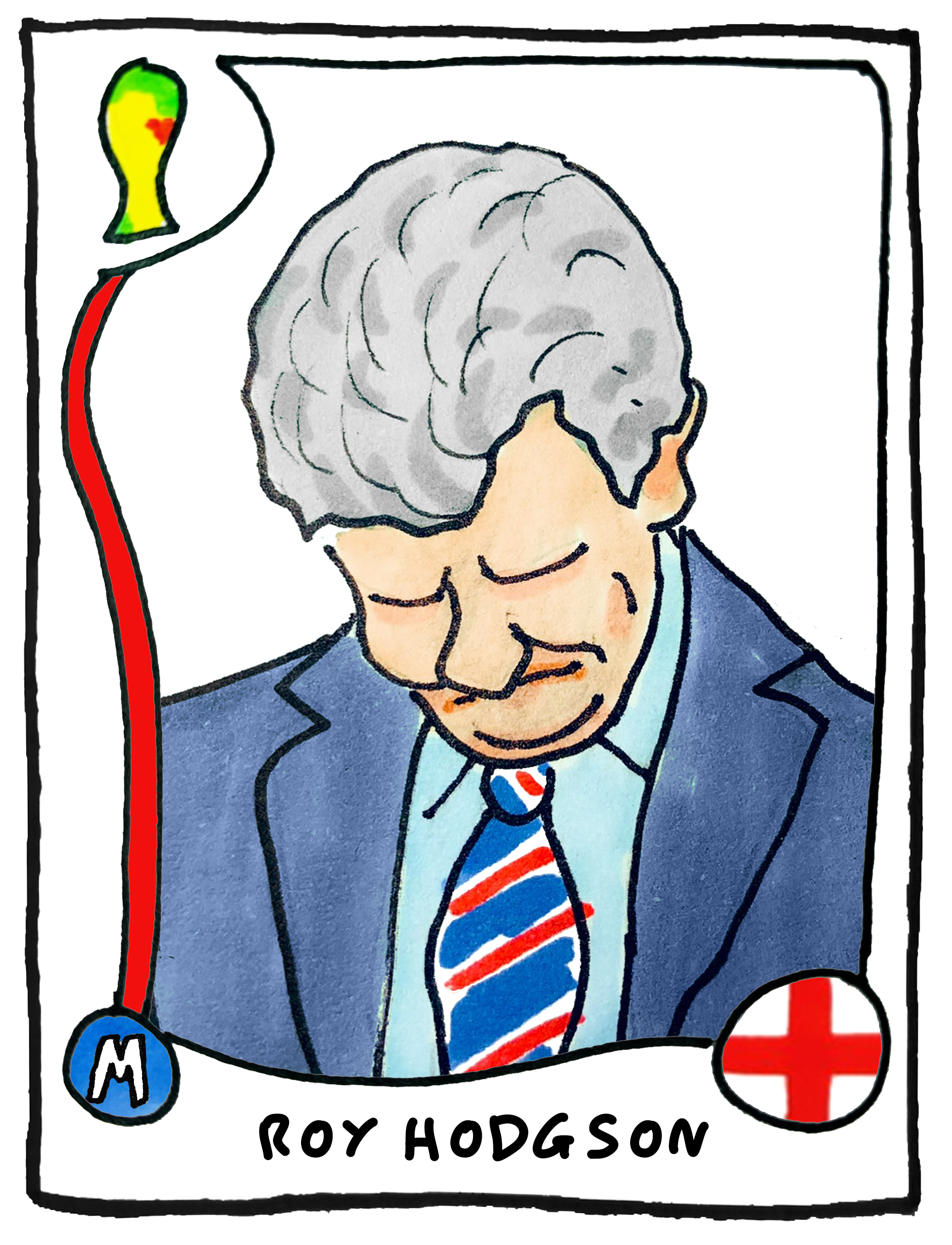 Has there ever been a sadder England side at a World Cup?

One could argue that, at the very least, England were there in Brazil. There’s photo and video evidence. It’s more than can be said for the sides of ’74, ’84 and ’94. But is that really enough?

Roy Hodgson’s men lost their opening Group D game against Italy by the odd goal in three, falling short despite a positive showing. It meant that they could not afford to lose to Uruguay in the next fixture.

Unfortunately, England’s defence could not (or perhaps would not, for reasons explained further down) keep touch tight on Luis Suarez. He left Jagielka for dead when meeting a Cavani cross for his first, then sped in behind a snoozing Cahill to win the tie with five minutes remaining. Any hope of slinking through were dashed by Costa Rica’s shock win over Italy. It was the first time that an England side had been sent crashing out at the group stage since 1958.

The Three Lions were playing for pride in their final game against the Costa Ricans, but endured only more shame. A drab goalless draw saw England collect their lowest points tally at any of their fourteen World Cup appearances.

The famous Roy Hodgson meme served to some up their tournament in a nutshell: a brief moment of optimism, followed by the head-bow of disappointment. 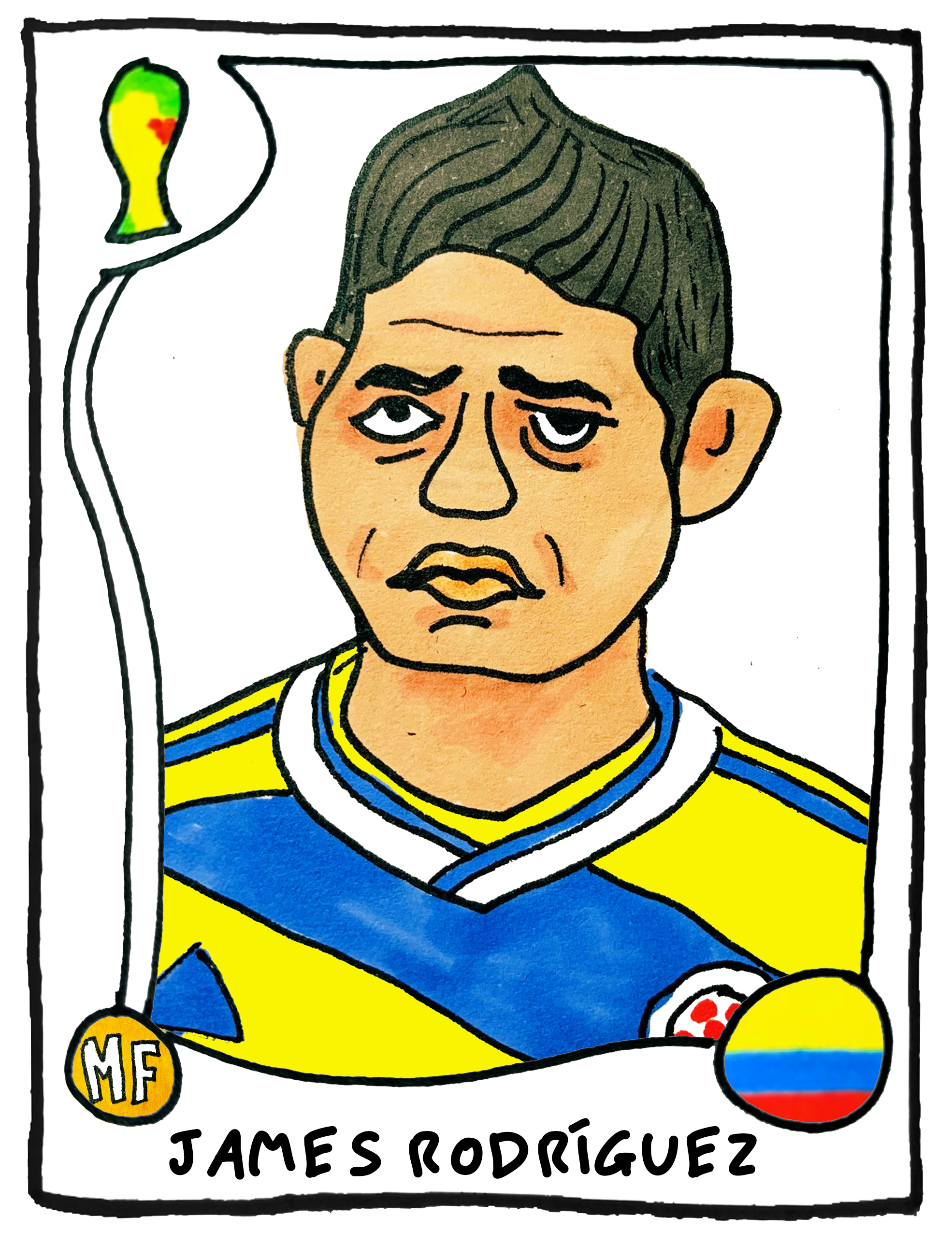 The Colombian playmaker had the tournament of his life in Brazil. His performances were nothing short of spectacular in Group C, scoring one and laying on two in the opening defeat of Greece. Another goal and assist against Ivory Coast ensured qualification, and even a spell on the bench couldn’t diminish his returns, scoring another and setting up two more in 45 minutes against Japan.

By the time Colombia faced Uruguay in the last 16, Rodriguez had found the net three times and provided five assists – but he had even more to give. His chest-and-volley from 25 yards rattled in off the crossbar – always more satisfying off the crossbar – and later became the first World Cup goal to win a Puskas Award. He scored a second later in the game, but it obviously wasn’t as good.

Nor was his consolatory penalty in the quarter-final defeat to Brazil, but it did take his final tally to six goals: enough to win the Golden Boot. Surprisingly, he did not win any of the Balls – Golden, Silver or Bronze – but true ballers like Maradona knew just how good he was that summer. 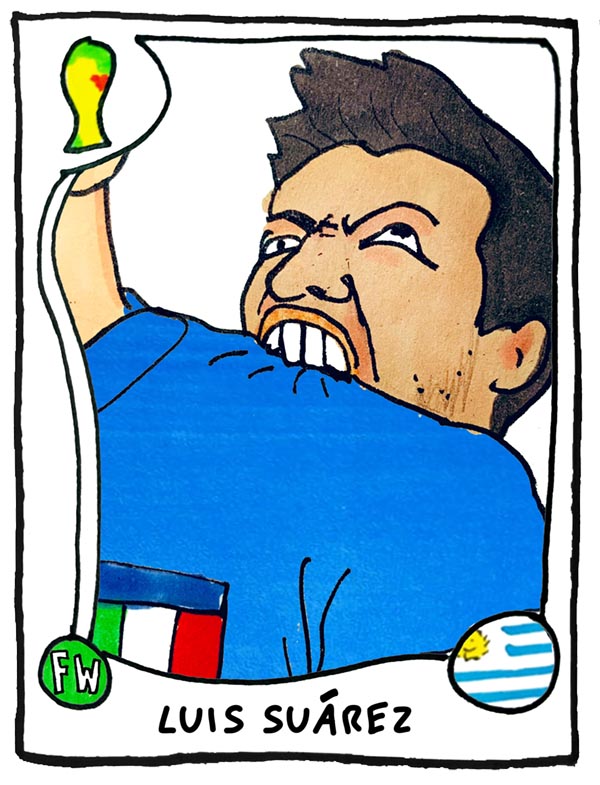 We told you a monster was born in 2010. By 2014, it had evolved into the most unpredictable of beasts.

Just months after his amateur goalkeeping impression at the 2010 World Cup, Luis Suarez enjoyed his first taste of flesh whilst playing in the Eredivisie, biting PSV’s Otman Bakkal on the shoulder. The Ajax forward managed to suppress his cannibalistic urges for three years, but found Branislav Ivanovic’s hairy arm too succulent to resist.

By the 2014 World Cup, Hannibal Suarez had refined his technique. He collided with Giorgio Chiellini and sank his fangs into the Italian veteran’s shoulder, but would immediately claim that the defender had in fact hit him in the teeth.

Thankfully, FIFA saw through the pitiful excuse. As muzzling Suarez would likely breach his human rights, the governing body instead imposed a nine-match international ban on the striker. It had the desired effect: Suarez hasn’t bitten anyone since (that we know of). 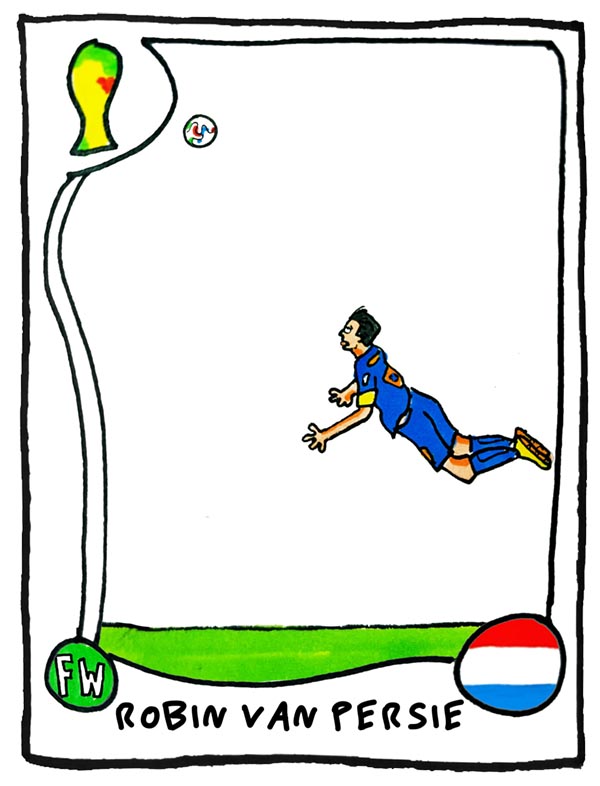 In Brazil, fans were treated to not just one Puskas-worthy goal, but three. In addition to James Rodriguez’s ridiculous volley, Tim Cahill scored a Van Basten-esque one of hisown against the Netherlands – again, bonus points scored for going in off the bar.

However, Robin van Persie’s goal occupies a special place in our hearts. Everyone loves a well-executed volley, be it crashing or curling, drilling or dipping, but how many players have ever lobbed a goalkeeper with a header from fifteen yards out?

Exactly. Daley Blind’s cross-field ball was magnificent, but really, it’s mostly about RvP: the perfectly-timed run to spring the offside trap, then the actual spring to elevate the ball over the head of the ‘keeper.

Not just any ‘keeper, either: Iker Casillas. van Persie’s diving header was the equalising goal against defending champions Spain, the side that had denied the Dutch a first ever World Cup win. The striker went on score again as the Netherlands exacted brutal revenge, triumphing 5-1 in Salvador.

The Dutch didn’t win the tournament, nor did van Persie win the Puskas Award. However, his head-volley (because when you think about it, most headers are volleys) will live longer in the memory than those other boring ones.