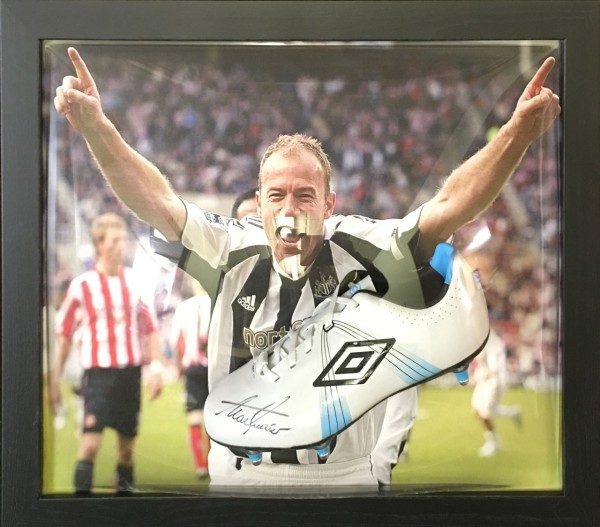 He is widely considered as one of England’s best ever strikers, being both Newcastle’s and the Premier League’s record goalscorer. A world-record £15 million move to his boyhood heroes, Newcastle United, followed the Euro ’96 tournament, and Shearer spent the remainder of his career with the club. Shearer won runners-up medals in the Premier League and FA Cup with Newcastle, and a second PFA Player of the Year award. After being named England’s captain in 1996 and Newcastle’s captain in 1999, he retired from international football following Euro 2000, having amassed 63 appearances and 30 goals for his country.

This Umbro boot was personally signed by Alan in a signing session carried out and attended by Allstarsignings in Newcastle, 10th November 2013.

* Please note that due to the fragility and dimensions of the product, there is a supplement charge on this product. This charge is in addition to the selected international shipping cost displayed for the desired country *.

To proceed with international shipping for this item, please call the national football shop at : 0161  871 8150. Or alternatively, email: [email protected], where a member of the team can advise on the additional cost, as well as providing a link for further payment.