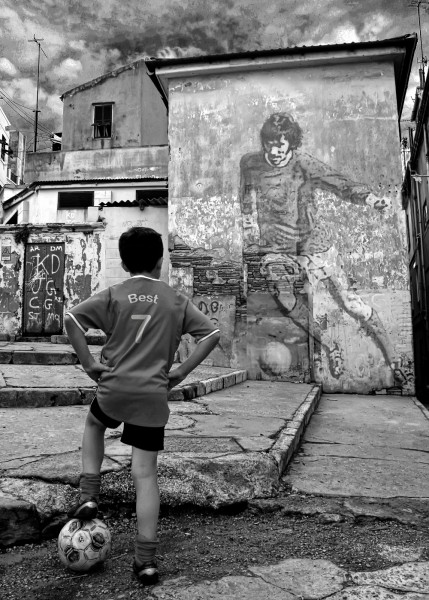 In 2010, Donovan Torres, a United fan from Gibraltar, won a photo competition run by The Sunday Times and Sony. He spoke to us about his winning entry, a fitting tribute to the late, great George Best whose legacy was celebrated during the Champions League tie with PSV Eindhoven…


“I was born 24 days before United won the 1968 European Cup and I dreamed of becoming a footballer, but when that ambition didn’t materialise I focused my attention on photography.

I’ve always been a huge United fan and my grandfather told me George Best was the best player he’d ever seen, and I remember having the 1973 strip with the number seven sewn on the back. George will always be the ultimate United player for me because he had grace, skill, flare and magic. Anyone who wears the no.7 now is expected to have those qualities – that’s the legacy he’s left behind.

Ever since George passed away in 2005 I had kept thinking about creating an image in his memory, but I wasn’t clear on what I wanted to portray until 2009. I scouted many areas that could resemble a derelict part of Belfast and opted for the Upper Town area of Gibraltar. There I took a photograph of a wall, which I digitally combined with an image of George dribbling with the ball.

I created the set-up using my son Doran as I was drawn to the innocence of youth of a Belfast boy who wanted to play football and didn’t know that a rollercoaster life lay ahead.

My aim was to bring that emotion to the image, which was made black and white because it has fewer distractions and is more dramatic. It won a photography competition organised by the Sunday Times and Sony in 2010, which was an honour and once again George weaved his magic for me!

People marvelled at Best’s sorcery while running with the ball and they envied his natural charm. He paved the way for the modern day footballer and those who saw him play will never see anything like him again. The photo has been sold to all parts of the world and, thankfully, his genius lives on.”