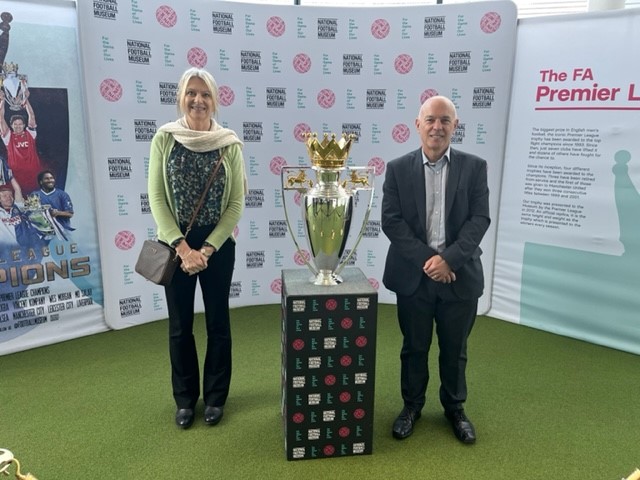 John Brewer (Chair) was appointed in February 2022 and brings a wealth of experience from across the football and sports sectors. He was the first sports scientist to work in English football and is a Professor of Applied Sports Science and has held a number of senior leadership roles at UK universities. John has previously Chair of British Handball and British Ski and Snowboard, leading the sports to the 2012 Olympic Games and 2014 Sochi Winter Olympic Games respectively.

Jane Bateman (Deputy Chair) is the Head of International Relations at The FA. She brings over 30 years’ experience working across the football and charity sectors and has worked on major projects including England’s World Cup bid, Euro96 Soccer City, the Ryder Cup and is also a Trustee of the Sir Bobby Charlton Foundation.

Paul Castle is a professor of sports physiology and has provided consultancy for many clients including Brighton and Hove Albion FC, UEFA and Team GB Paralympics for Athens 2004, Beijing 2008 and London 2012.  He now works for GSK.

Neil Fairlamb is the Strategic Director of Neighbourhoods for Manchester City Council, previously holding the position of Head of Parks, Leisure, Youth and Events. He is also a Trustee at Wythenshawe Forum.

Catherine Forshaw is a Regulatory Sports Lawyer and Sub-Sector Leader of the Women in Football initiative at Brabners LLP. Prior to joining Brabners LLP, Catherine completed a six-month secondment with The FA at Wembley Stadium.

Steve Grace is currently Head of Audience Planning for BBC Sport, having spent the last 10 years working in audience strategy at the BBC and The LEGO Group.

Matt Pilkington has worked in the charity sector for the majority of his career and has over 10 years’ experience in senior fundraising and communications roles. He is currently a director at StreetGames, the national charity working to equalise access to sport for those growing up in the underserved communities in the UK.

Laura Pye is Director of National Museums Liverpool, having previously worked as Head of Culture for the Bristol City Council, overlooking the city’s’ five museums.

Rikki Singh is a former BBC journalist of over 30 years. He was also on the David Mellor Task Force looking into access and facilities for disabled football supporters and has also served on an FA Diversity Panel.

Moira Stephenson has held a number of senior roles within the museums and cultural sector, including Director of Macclesfield Museums and Head of Manchester City Galleries. She is also a Trustee of the Greater Manchester Building Preservation Trust.

Tom Watt is probably best known as an actor, but has been writing, broadcasting and making documentary films about football for the past 35 years. He has contributed match reports, radio phone-ins, long-form press and broadcast features to every major UK media outlet.

Dr Wanda Wyporska is the Chief Executive of the Society of Genealogists, the national charity that houses the largest archive and library on family history. She previously led The Equality Trust.