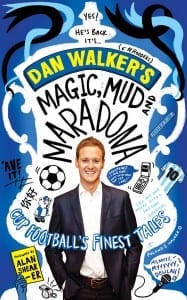 Dan Walker is no stranger to the National Football Museum. He's hosted our Hall Of Fame awards and even presented Football Focus live from the museum. We don't think any of these moments have made it into his new book, Magic, Mud and Maradona: Cup Football's Finest Tales, which he will be signing copies of at the museum on Saturday.

But there have also been moments when things haven't quite gone according to plan, as when he rubbed out the names on Wrexham's honours board live on Football Focus, or when he was halfway up the famous Wembley arch on FA Cup final day, only to be interrupted by his mum ringing him up to ask what he wanted for his tea.

Dan's own personal highlights reel are a jumping-off point for some of the funniest and most bizarre football stories of cup success and failure, from the most outrageous dressing-room dust-ups to Maradona's greatest rants. Then there's those moments that show footballers in a new light, such as Ipswich Town's Paul Anderson, who paid to repair a fan's ceiling after the fan punched a hole in it  when celebrating a vital goal scored by Anderson. Packed with brilliant photographs, and told in Dan's unique style, the book also features a collection of his hugely popular team line-ups to make this the perfect gift for football fans everywhere.

Get your copy signed (books are available from the museum for £12.99 on the day) by the man himself, who will be hotfooting it over from the Football Focus studio for around 1.30pm. Dan will be reading some highlights from the book