Author Michael Barrett presents an illustrated talk about the making of his bestselling graphic novel: Preston North End – The Rise of the Invincibles. Illustrated by Roy of the Rovers artist David Sque, the exciting graphic novel charts the early days of football and the formation of one its greatest ever teams! 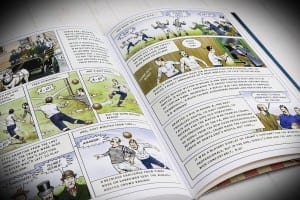 In the summer of 1883, William Sudell set out on a quest - pure in honesty, extreme in vision.

What happened would change the face of modern football forever.

This is the story of a club – born of men from factories and mills – which blazed a trail through British football. A club fuelled by the ferocious ambition of one man, who garnered a team blessed with glorious talent and a sheer bloody-minded refusal to ever give in. A team that touched on perfection and passed into legend, forever to be called… INVINCIBLE.

Preston North End – The Rise Of The Invincibles, is the exciting full-colour, graphic history about the birth and early success of one of England’s most famous clubs.

Penned and created by writer Michael Barrett, illustrated by Roy of the Rovers artist David Sque, and with a Foreword by former player and now BBC pundit Mark Lawrenson, this evocative book presents the days of the Invincibles as you have never seen them before. And now you can hear the story behind the book in a special illustrated talk by the author, Michael Barrett. 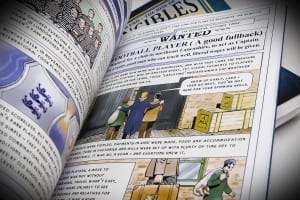 Michael will talk of who the Invincibles were, and what inspired him to produce a comic book-style history of their story; as well as taking us through the painstaking process of producing the book. And what a book!

11 chapters of glorious illustrations span the 1860s through to 1889; taking in along the way, the Industrial Revolution, the American Civil War, the Lancashire Cotton Famine, and the formation of the Football Association and the Football League – thus naturally offering a sporting and social history alongside that of a football club. And as Prestonians know, this isn’t just any football club!

One of 12 founding members of the Football League, Preston North End were the first team to win the League and FA Cup double in the same season – a feat they achieved by going the whole campaign undefeated, whilst not conceding even one goal during their FA Cup run!

But it’s not this alone that sets them apart.

Over the years numerous records were broken for attendance, high scores and unbeaten runs, as North End’s scientific approach and innovative training took football to new levels. Yet, perhaps the most significant legacy of William Sudell and his team is the major role they played in the fight to legalise professionalism – a move that propelled football into the modern era and paved the way for the global phenomenon it is today.

Under the dictator-like control of Sudell, North End became an unstoppable force and supporters flocked in their thousands wherever they played. And now, thanks to the vibrant illustrations of David Sque, you too can witness the Invincibles in action! With a nod towards the comic books of the past, PRESTON NORTH END – THE RISE OF THE INVINCIBLES recalls the heady days of Victorian football, as famous players such as Fred Dewhurst, Nick Ross and Johnny Goodall leap out from the pages and breathe new life into a story many know and love, but never witnessed.

This is the story of the Invincibles like you have never seen it before!

Two talks will take place on Saturday 15th July at the National Football Museum. Times: 12.30pm & 2.00pm. Michael will be on hand afterwards to answer any questions and sign copies of his book.