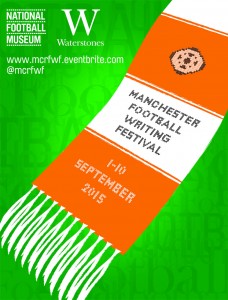 The 2nd Manchester Football Writing Festival picks up just where the hugely-successful first festival ended: with The Blizzard, Live at the National Football Museum!

The Blizzard is the quarterly football publication featuring top class authors and journalists from around the world.

Once again The Football Ramble's Marcus Speller will be hosting the event, taking questions from Twitter and and steering the panel through the minefield of issues that The Blizzard covers.

Editor Jonathan Wilson, author of Inverting The Pyramid, will return to this year's panel having provided a frankly surprising number of anecdotes based around the Angolan press box last time out.

The Guardian's David Conn, author of Richer Than God: Manchester CIty, Modern Football & Growing Up, has also confirmed his return for the kick-off event of the festival.

Completing the line-up, Andy Brassell is an expert on European football who regularly appears on BT Sport, ESPN and Talksport as well as in the pages of The Guardian and many more.

The Blizzard was a sell-out last year so be sure to book your tickets for this one quickly!