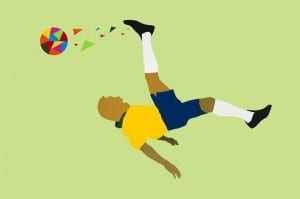 Party like Pelé with an after-hours peek at the National Football Museum's new exhibition. Everyone's invited to a launch party with a difference; live Samba music and Caiprinhas until late await as we celebrate football's most inspiring individual.

As part of Manchester After Hours, a city-wide social which sees museums open after dark in conjunction with Manchester's musicians and artists, we'll be bringing a Brazilian vibe in honour of our new exhibition.

Pelé: Art, Life, Football looks at the stages of the Brazilian icon's life; from Santos to New York via 4 World Cups, through the eyes of artists and photographers around the world.

In addition to a superb collection of art inspired by the man, the National Football Museum bring together iconic items from their own collection and those owned by private collectors to illustrate the life and career of the first man to truly transcend the global game.

For one night only, the sounds of Brazil will fill the museum, with drummers from Global Grooves bringing a samba swing to the Hall Of Fame and guitar filling the galleries.

We'll be serving cocktails and drinks all night, and visitors will be able to contribute to a unique Pele-inspired artwork during the evening.

As well as a preview of Pelé, the full museum will be open to the public to enjoy after hours.

For more about Manchester After Hours, including events at other museums and venues on the evening, follow @McrAfterHours or visit www.manchesterafterhours.co.uk