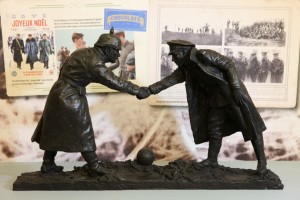 Statue recreating the Christmas truce of 1914

The Greater Game: Football and The First World War tells the forgotten stories of players and fans during World War One.

This major new exhibition explores the role football played at home and at the front during the war years, and explores the myths and reality of famous stories from the conflict.

From the FA Cup winner killed just days before the end of war to the soldier injured in battle who fought back to be England captain, this engaging and original new exhibition will bring you closer to the people who served their club and their country a century ago.

Highlights on display include a previously unseen diary detailing the events of the famous 'Christmas Truce' of 1914, as well as lost footage from the front and of wartime football.

The exhibition also explores the continuation of football at home, and the controversy of the 1914/15 season, as well as the rise of the women's game during the war years.

The Greater Game looks at how the war is commemorated in football now, and also features photography from current conflicts across the world, highlighting the work of the Mines Advisory Group and photographer Sean Sutton. 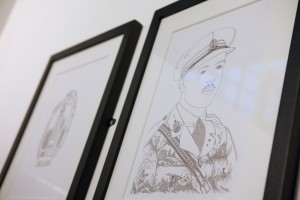 To accompany the exhibition, the National Football Museum is supporting the online project to compile the comprehensive database of the contribution made by football and footballers during the First World War.

www.footballandthefirstworldwar.org features stories and record of every player who served during the conflict, as well as records of wartime football and stories from the wider game.

The site is appealing for 'citizen historians' to come forward with stories and artefacts relating to football during the war years.

Please note, there is a £1 admission charge for adults to this exhibition. Funds raised will go towards a permanent World War One display in our museum galleries. Admission for under 16s is free.