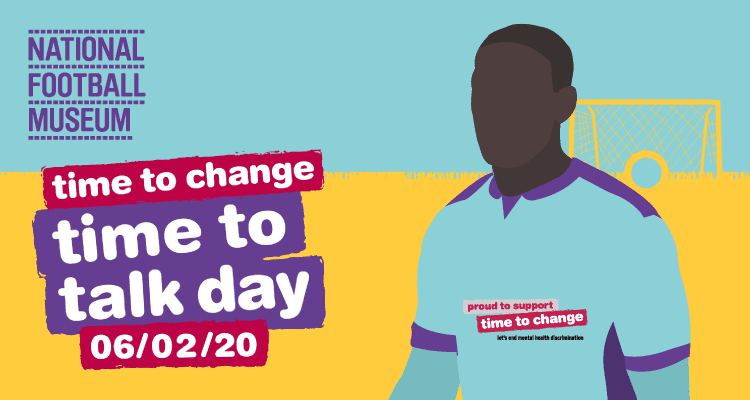 The National Football Museum is proud to support Time to Change, hosting a discussion about football and mental health on Time to Talk Day.

We will be opening our doors for a busy day of programmes, talks and activities. Football can be a useful tool for promoting positive mental health, from social inclusion - as promoted in our Sporting Memories sessions - to physical health.

On Thursday 6 February, an esteemed panel will meet in the Pitch Gallery to discuss football and mental health. Former Premier League footballer and CALM ambassador Marvin Sordell retired from football at the age of 28, citing mental health issues as a key factor in his decision.

Marvin will be joined by fellow CALM ambassador Jonny Sharples, who uses his social platform amongst football fans to campaign tirelessly in aid of the charity. CALM is leading a movement against suicide, which is the single biggest killer of men under 45 in the United Kingdom alone. Jonny, also known for the creation of Football Manager newgen legend Ivica Strok. is raising funds for the charity via an online raffle. A number of items are up for grabs - including a National Football Museum x Stanley Chow shirt and family admission pass.

The talk kicks off at 12:30pm, and is free to attend for National Football Museum ticket holders and City of Manchester residents.

The National Football Museum will also be bringing in five loan signings from Imperial War Museum North to talk about their experiences and mental health. Volunteers from IWMN's popular We Were There sessions will be at the museum between 11:30am and 2:30pm, sharing recollections of their wartime careers and the beautiful game.