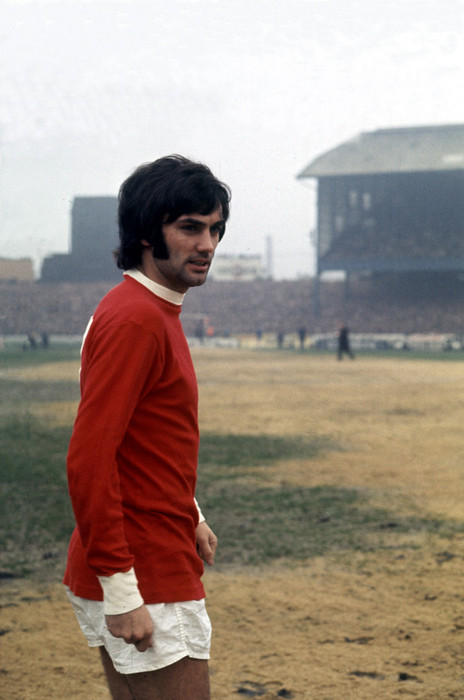 George Best in his Manchester United kit, circa 1969. Image via Mirrorpix.

Arguably the world’s first true football superstar, Northern Ireland’s George Best had the looks and personality to ensure his popularity went beyond football and into the world of mainstream entertainment.

Popstar looks, a dedication to fashion and a reputation as a playboy meant Best was a figure of fascination for the public from his emergence with Manchester United in the swinging sixties until his sadly early death in 2005.

However the fame was earned thanks to a prodigious talent on the pitch. In an era of muddy fields and tough tackles, Best seemed to glide through opponents and do things with a ball that no-one else could. Able to play on either wing, up front or behind a central striker, at the peak of his abilities Best was almost unstoppable. The Belfast Boy was even described by Pelé as “the greatest player in the world.”.

Spotted by Manchester United scout Bob Bishop in Belfast at the age of 15, he made his first team debut in September 1963, aged 17. United manager Sir Matt Busby put his trust in Best, making him a first team regular by the following season, with the team going on to claim the First Division title.

"I think I've found you a genius..." Scouting report by Bob Bishop

He was still a teenager when a star performance against Benfica in the European Cup saw the Portuguese press dub Best "the fifth Beatle", a nickname that would remain in the public's perception throughout his life. 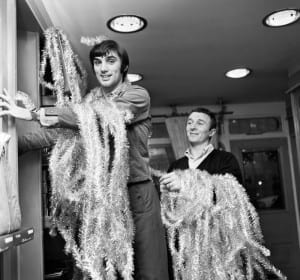 Best was the youngest member of a United attacking line that became known as 'the holy trinity'. England international Bobby Charlton was ten years Best's senior, and Scotland striker Denis Law was an established international who had signed for a British transfer record fee £115,000 in 1962. However the three forwards complemented each other brilliantly on the pitch, helping United to conquer Europe in 1968, with Best scoring the vital second goal in a 4-1 European Cup Final win at Wembley, again against a Benfica side featuring the great Eusebio.

In the same season, United's rivals Manchester City pipped them to the domestic title by just 2 points. Best was to become great friends with City midfielder Mike Summerbee and, with the city's footballers enjoying great success on the pitch, a celebratory lifestyle off the pitch was becoming George's trademark, as much as his sublimely skilful dribbling. Best and Summerbee opened a chain of fashion boutiques, and George also went into the bar and nightclub business, as well as earning extra money from a string of sponsorships and endorsements.

That European win was arguably the highlight of Best's career. The following season United were off the pace in the league and reached the semi-finals of the European Cup. Best was sent off in the 2nd leg of an Intercontinental Cup game against Argentinian side Estudiantes; having been targeted for rough treatment throughout, he threw a retaliatory punch after being spat at by an opponent. Sir Matt Busby, the manager who had nurtured Best's talent, retired at the end of the season.

As an individual talent Best continued to shine; in 1970 he scored six goals in an 8-2 FA Cup win against Northampton Town, and even when playing mostly on the wing he was to be the club's top scorer for six consecutive seasons.

However United's decline in the early 70s was to spell the end of Best's golden years too. Problems with alcohol led to increasingly erratic form and behaviour. Best's final appearance was on 1 January 1974. New manager Tommy Docherty dropped Best after the game, a 3-0 loss to Queens Park Rangers in which one reporter described him as "lacking the burst of speed that used to take him away from danger...Seldom can he have been caught in possession so often...". He had played 474 games for the club, scoring 179 goals. He was still just 27. United were relegated at the end of the season.

Even after his departure from United, which saw Best play for teams in the USA, South Africa, Ireland, Scotland, Hong Kong and Australia, he was still an automatic choice for his country. He won 37 caps for Northern Ireland, but was never given the chance to play at a major championship finals: the 1982 World Cup finals came too late for a player whose once-great fitness had deserted him. His final retirement (something he'd threatened many times) came in 1983, after 4 games for Brisbane Lions, at the age of 37. In the decade since United he'd played for 10 more teams.

Best died in 2005 at the age of 59, having struggled with alcoholism for much of his adult life. However the enduring memory for football fans is of an outrageously talented footballer, playing with an exuberance and confidence that belied his youthful looks and frame. While he made Manchester United kings of Europe, it looked like George Best could conquer the world.