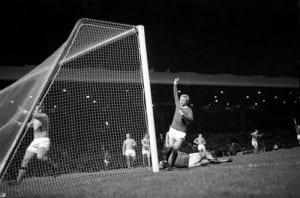 Nicknamed ‘The King', Denis Law reigned at Manchester United for 13 years in between two spells with local rivals Manchester City. A statue of Denis Law stands on the Stretford End, testimony to the Scotsman who combined speed, skill, bravery and aggression.

In 1956 he became the youngest player ever to play for Huddersfield Town when he made his debut aged just 16 years and 10 months. With Huddersfield he played alongside future 1966 World Cup left-back Ray Wilson, and under future Liverpool manager Bill Shankly. Shankly rated Law, turning down an offer from Manchester United for the young Scot. Shankly left in 1959 for Liverpool and a year later Law joined Manchester City for what was then a British record transfer fee of £55,000. In 1961 Law scored an incredible six goals in an FA Cup tie against Luton Town until the game was abandoned with 20 minutes to go!

Law only spent one year with City however. At this point, there was a maximum wage restriction for players in the English Leagues and an offer from Italian side Torino proved too much to resist. His time in Italy didn’t prove a happy experience and fellow Scot Matt Busby at Manchester United was only too happy to bring Law back to England. It was this transfer that ignited the young Scot’s career. Law helped transform Manchester United into the successful team of the 1960s alongside the likes of Bobby Charlton and George Best. They won the FA Cup in his first season and were runners-up in the league the following year, with Law scoring 46 goals – more than any United player before or since. For his efforts, Law won the 1964 European Footballer of the Year award (the Ballon d'Or). Law picked up his first league winner's medal in 1965, with Law finishing the season as United’s - and the First Division’s - top goalscorer.

"Denis was the best in the business, he could score goals from a hundredth of a chance never mind half of one" George Best 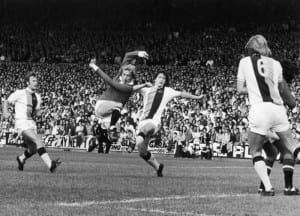 Crystal Palace v Manchester United, March 1974.
Denis Law blasts the ball into the back of the net. Pic courtesy of Mirrorpix.

Law was club captain for the next three seasons and in 1968 he crowned a glittering domestic career when United clinched the European Cup. He played on at Old Trafford for another five seasons, but without the success of his earlier years. Blighted by a knee injury, Law was given a free transfer across to the blue half of Manchester. He played just one season, scoring an infamous backheel against Manchester United which saw United relegated to Division Two, though results elsewhere meant United would have been relegated anyway.

Law retired from football after the 1974 World Cup Finals in West Germany, where he made the last of his 55 appearances for Scotland, having scored a record 30 goals (twice scoring 4 goals in a match), a record he shares with Kenny Dalglish. Despite all of his success with United he still cites being informed about his first cap for Scotland as his greatest moment.

After 11 years at Manchester United he had scored a total of 237 goals in 404 games in all competitions. Law also held the record for the number of FA Cup goals until surpassed by Ian Rush. Although he helped to send United down to Division 2, Law remains a legend and one-third of the famous ‘United Trinity’ alongside Best and Charlton.