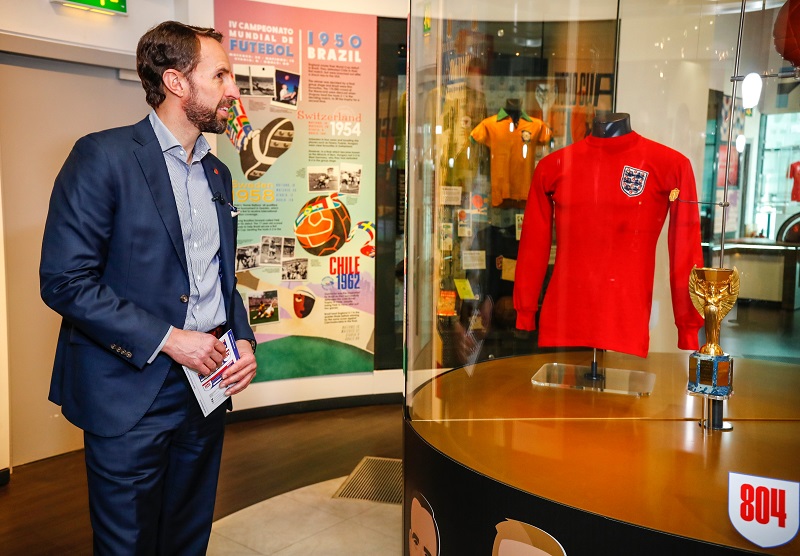 Image courtesy of the FA.

2022 marks 10 years of the National Football Museum in Manchester. During this time, the museum has welcomed over 2.5 million visitors from across the globe with a simple mission; to share stories about football.

The National Football Museum was developed in the 1990’s and opened in Preston in 2001. Located at Preston North End’s Deepdale ground, it was home to a wide collection of football objects and archives, which has now become the Football Heritage Collection. Despite being popular with visitors and critics alike, funding challenges resulted in the museum closing to the public in 2010.

Working in partnership with Manchester City Council and with investment from the European Regional Development Fund and National Heritage Lottery Fund, the National Football Museum opened in Manchester’s iconic Urbis Building in 2012.

The National Football Museum is now custodian to the world’s largest collection of football objects and archives. There are over 40,000 items housed in our Resource Centre in Preston and around 2,500 are on display at the museum at any one time. Our exhibitions programme enables us to showcase the collection through impactful storytelling, and by exploring cultural and creative themes that truly represent the role of football in society and our lives.

As a national museum we are committed to ensuring the National Football Museum, its services and resources are accessible to all. Our community programme connects our audiences, provides an inclusive and welcoming experience, breaking down barriers and increasing engagement from underrepresented groups.

In 2019 we relaunched the Hall of Fame with a new commitment to achieve 50% female representation across the game. In 2022 and on the eve of the Women’s Euros, we launched the Crossing The Line exhibition showcasing the journey of women’s football from Victorian era to the present day, from grassroots to the professional game.

In November 2022 the National Football Museum achieved National Portfolio Organisation (NPO) status awarded by Arts Council England to leading institutions that maintain the world class cultural sector of England. Thanks to Arts Council England funding we can widen the reach of our work through Football Creates, using the unrivalled power of football to engage people and communities in creativity, championing inclusion and improving wellbeing.

Thanks to the continued support from Manchester City Council, residents and schools from the City of Manchester are able to visit free of charge.