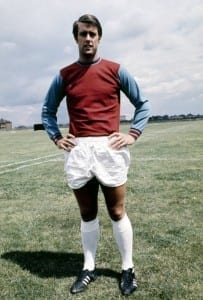 Sir Geoff Hurst remains an icon of English football, as the only player ever to score a hat-trick in a World Cup final.

Synonymous with England’s victory over West Germany in the 1966 final, the West Ham striker had only made his international debut (in a friendly against the same opponents) earlier that year.

In fact the hero of the final started the tournament on the bench, with Jimmy Greaves and Roger Hunt preferred up front during the group stages. Only injury to Greaves, England’s star man, gave Hurst the chance to play in the quarter final. The West Ham man took his chance; scoring the game’s only goal, and followed that up with an assist in the 2-1 semi final win over Portugal. Despite Greaves’ return to fitness, manager Alf Ramsey stuck with Hurst for the final; a decision that was proved to be spectacularly successful.

Few football fans could be blamed if they were surprised at the identity of the scorer of England’s most important goals. Just a few years earlier, all-round sportsman Hurst was still split between football and cricket, having played first-class cricket for Essex as late as 1962.

He had been given his first-team debut as early as 1958, aged just 15, as a midfielder. By the time he scored his first goal for the club 3 years later, playing as a left-half, his youth-team colleague Bobby Moore was an established first team star, and was to make the 1962 World Cup squad. It was the new West Ham manager Ron Greenwood who chose to move Hurst to striker at the start of the following season: a league strike-rate of almost one-in-two vindicated the move. 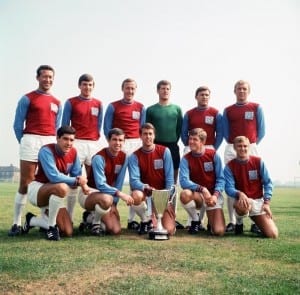 The following season Hurst was to score in almost every round of the FA Cup, including a semi-final winner and crucial equaliser in the final, as West Ham lifted the famous trophy.

Hurst continued to be an important and versatile member of a West Ham team who were to go on to taste European glory in the Cup Winners’ Cup in 1965; often playing in a more withdrawn role behind the striker. Although he was learning his trade with West Ham, it was taking his skills to England that would define him in the eyes of world football.

In Ramsey’s ‘wingless wonders’, Hurst was to find himself a pioneer in the role as a forward target man. His movement, strength and ability to lay the ball off, changing the point of attack and creating space and width for others made a number of other British managers take notice.

"Brave as they come: the strength of his running and his ability to drag defenders out of position are phenomenal." Ron Greenwood

Hurst had scored 40 goals in the 1965-66 season, and a World Cup hat-trick understandably did wonders for his growing confidence and reputation. Ron Greenwood signed Hurst to a new six-year contract after the tournament, which was rewarded with a run of 22 goals in 14 games and saw Matt Busby make a record-breaking £200,000 transfer offer, which Greenwood curtly turned down. 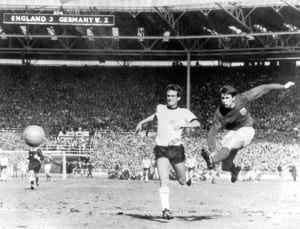 Despite having the country’s star striker up front and inspirational captain in defence, West Ham were to struggle with consistency throughout Hurst’s golden period, and further silverware was sacrificed for continued entertaining football. Hurst though remained a first-choice for club and country until 1972. After 248 goals in 499 games for West Ham, Hurst was sold to Stoke at the start of the 1972-73 season.

A little of the pace and mobility that had been part of Hurst’s trademark had dissipated, but the work ethic, attitude and eye for goal remained. Two fifth-placed league finishes with the potters were to be his highest first division placings.

A season in Division Two with West Brom followed, and spells in Ireland with Cork Celtic and the North American Soccer League with Seattle Sounders brought Hurst’s playing career to an end, as he retired in 1976.

But Hurst will be forever associated with his achievements of July 30, 1966 when a player, a team, and a whole footballing nation, came of age.