Kenny Dalglish is frequently cited as Liverpool's greatest player by his team mates and in fans' polls. These days, he's still known as ‘King Kenny’ by supporters of the Anfield team. But the Glasgow-born striker faced a tough challenge replacing Kevin Keegan when he was purchased from Celtic in 1977. His success was immediate, capping off a brilliant first season with a sublime winning goal in the European Cup Final.

More was to come from Kenny the following season. He netted 21 league goals – a personal best – and was recognised as the FWA Footballer of the Year at the conclusion of the championship-winning campaign. He was ever-present his first three seasons at Anfield, and started both the League Cup Final fixtures (scoring in the replay) and the European Cup Final, lifting silverware at the end of both.

Dalglish was part of Liverpool’s golden era of success, playing as part of the formidable Scottish spine of the side with Graeme Souness and Alan Hansen, and subsequently in an unstoppable striking partnership with Ian Rush. Between 1983 and 1985, Dalglish would win Footballer of the Year a second time, finish as runner-up to Michel Platini in the Ballon d’Or, and lift yet more trophies in the form of the League Cup, European Cup and First Division Championship.

He continued his career at Liverpool as player-manager, steering the club to further success. In this dual role, he finally claimed the only English silverware missing from his cabinet, the FA Cup, in 1986, as well as another league title.

Thereafter, Kenny wound down his playing commitments; from the dugout, he masterminded another FA Cup triumph and two more league titles until his surprise resignation in 1991. The emotional strains of the Heysel and Hillsborough disasters during Dalglish’s time at Liverpool place him at the centre of an extraordinarily impactful period in English football.

He is widely admired throughout the game. Franz Beckenbauer said “Dalglish was one of the best players in the history of football.”  Sir Alex Ferguson has said of his fellow Glaswegian “Kenny had unbelievable vision and strength. He is a man I shall always respect.” For Steven Gerrard he is “the best player to ever wear a red shirt”. And for Bob Paisley he was “the best buy we ever made – as simple as that”.

"THE BEST PLAYER EVER TO WEAR A RED SHIRT" STEVEN GERRARD

Dalglish attended the inaugural National Football Hall of Fame awards in 2002 and subsequently accepted a special National Football Museum European Hall of Fame award in 2008, hosted by Michel Platini, as an all time great player from the English game based on performances in UEFA competitions.  He was voted PFA Player of the Year in 1983 and FWA Footballer of the Year in 1979 and 1983. 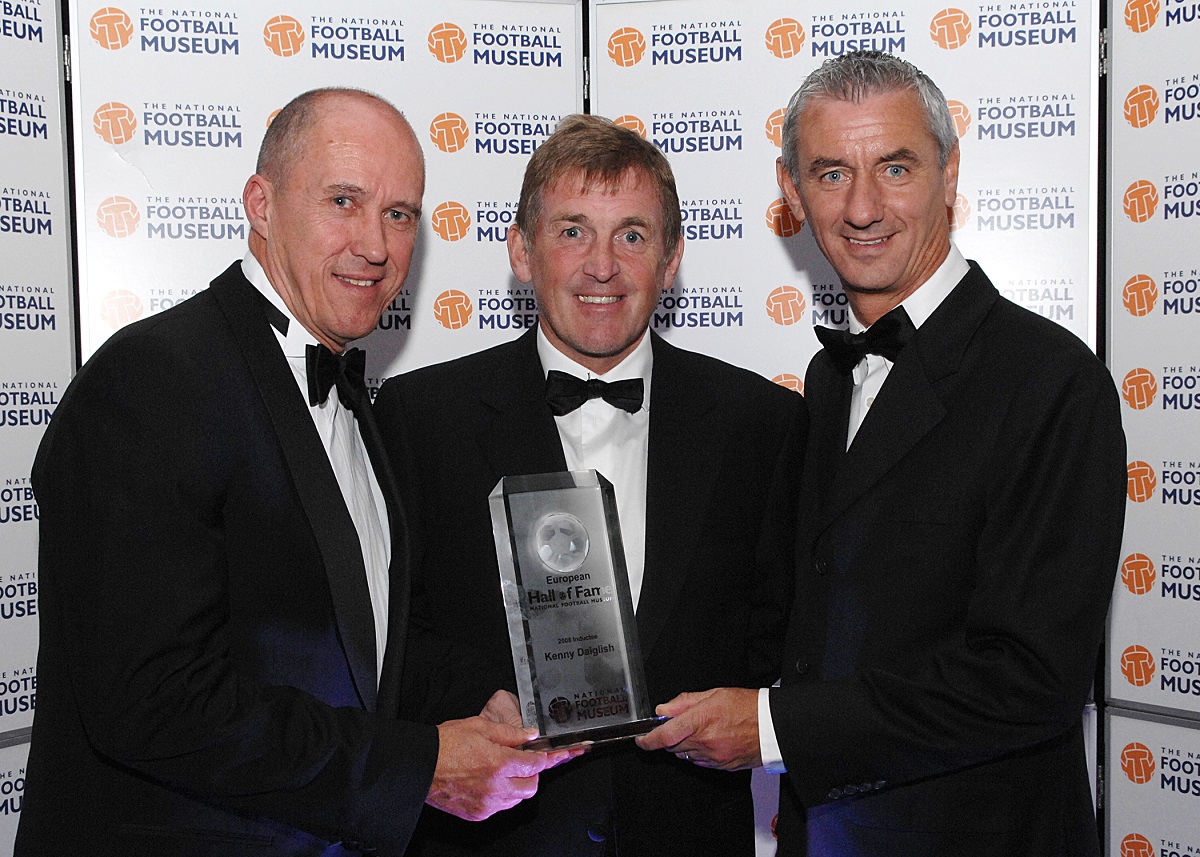 His former team-mate, Mark Lawrenson, speaking at his own Hall Of Fame induction in 2016 said: “The most difficult player I played against I also played with; Kenny Dalglish. He couldn’t run, he couldn’t head it, he had a big fat arse... and he was a genius. Just an absolutely unbelievable footballer; every 20 years maybe you get one player like Kenny. He was sensational."